Sharon Eckman, "I See You" 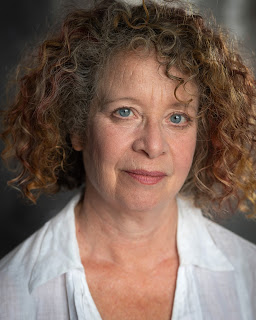 Sharon Eckman is an actor, singer and writer. Winner of the Time Out Travel Writer of the Year, she has been longlisted twice for the Fish Memoir Prize and shortlisted for the Words & Women Prose competition and the Jerwood/Arvon Mentorship Scheme. Short fiction has appeared in Shooter Lit, Words & Women: 3, 100 Voices: An Anthology, 100 Voices for 100 Years and New Flash Fiction Review. She is currently working on a novel and has just completed her first short film. Her website is here.

Below, you can read a story by Sharon, first published in New Flash Fiction Review here. 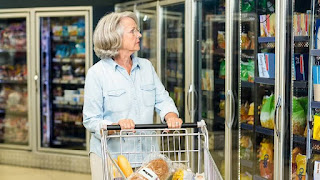 Grace Savage arrives as the supermarket doors open on Christmas Eve morning. ‘Twice widowed, now shy,’ as she invariably describes herself, Grace browses the fruit and veg aisles, inspecting carrots and parsnips, furtively popping a green grape into her mouth. Her youngest grandson loves green grapes and this is the best way to tell if they are ripe. Grace doesn’t consider it stealing – she will buy after she tries.

She transfers the basket to her other arm; she hadn’t change for a trolley and everyone else was in too much of a rush to be bothered with an elderly lady dithering by the entrance.

Carefully checking her list, Grace Savage treads her accustomed path past milk and yoghurt, stopping for a pot of double cream for the Victoria sponge which had been her eldest grandson’s favourite. Someone jostles her basket arm and she turns to apologise to the track-suited young man who impatiently pushes past her.

“Fucksake,” she hears him mutter. “Get out of the way you stupid old cunt.”

She considers responses. 1. Ignore. 2. Push back. 3. Point out that her ‘cunt’ is not so old and that she feels sorry for the ‘cunt’ responsible for his entrance into the world.

“Do you talk to your own grandmother with that mouth?”

Grace Savage hasn’t said this – a middle-aged man with an army haircut and cold grey eyes accosts tracksuit man who opens his mouth to spit bravado, meets that cold stare and smirks instead.

“Just banter, innit? Bit of bants? Here love, let me get that for you.” And he reaches for another pot of double cream she neither wants nor needs. Banter. Of all the words currently swilling around the world, she particularly loathes this one.

Grace Savage shakes her head. “No thank you,” she answers politely and returns the pot to the fridge, exchanging a look with army haircut man who gives her a brief, chilly smile and fills his own basket with French cheeses and crème fraiche. Tracksuit man mutters something and her hands shake as she transfers the basket again and bumps her knee on the edge of the chiller as she turns away. She hears him huff a laugh and a pulse begins to beat in her forehead.

She alters her usual route and stands in front of a shelf of cat food for the cat she no longer has. Tracksuit man has followed, picking up a two-for-one special on Pedigree Chum. He has a badly-trained crossbreed called Tyson, she decides. Tyson would be a good dog with another owner.

Tracksuit man replaces the dog food and picks up some wild bird seed. Grace is now convinced he is following her; she feeds her garden birds, whereas this man probably shoots them with an air rifle.

The game is on. Grace leads him past sanitary products, home baking and novelty cakes. He remains perhaps five paces behind. Eventually, via a circuitous route taking in electrical goods, cleaning products and makeup, they arrive at the tills. Her basket is now full. He holds nothing but a copy of The Sun.

She queues at ‘baskets only’. He slots in behind her and she hears his breath come short and sharp, can smell cigarettes mixed with something rank and rotting. His soul, she thinks. His bantering soul.

Two tills down, she sees army haircut man. He is watching and she feels a little comforted.

At the last minute, she veers away to the self-checkouts and yes, tracksuit man follows with his threatening breath and folded newspaper. Her grandson’s death went unreported in that paper; they were too busy sharing stories of overpaid footballers to bother with a boy who’d killed himself after relentless bullying. ‘Just banter,’ they’d said. Fourteen years old. His little brother found him swinging from the curtain pole.

She places her basket, scans each item deliberately slowly. His breath is louder, close by her ear and she can hear him muttering. “If you were my grandmother, I’d have smothered you in your sleep. I’d drown your cat and leave it on your doorstep.”

She unscrews the top and with calm, considered precision, flings the contents into tracksuit man’s face and as his agony fills the store and his skin starts to bubble, she reaches into her bag and eats another grape.

Posted by Creative Writing at Leicester at 01:32