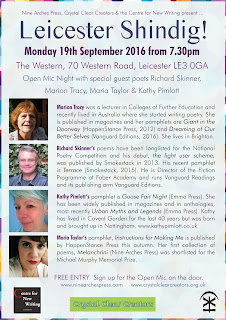 Between 2010 and 2017, Leicester Shindig was a regular and well-known open-mic poetry evening, taking place every two months. Leicester Shindig is currently taking an extended break, so it seems like a good moment to look back on it, and record our thanks to everyone involved.

For most of its long run, Leicester Shindig took place in The Western Pub, and was jointly hosted by independent publisher Nine Arches Press, arts organisation Crystal Clear Creators (now discontinued) and, in the last couple of years, the Centre for New Writing at the University of Leicester. Regular comperes included Jane Commane, Matt Nunn, Maria Taylor and myself. The evening generally consisted of two halves, including a series of open-mic slots, followed by featured writers.Over the years, Leicester Shindig featured poets, storytellers, fiction writers, as well as magazine, anthology, pamphlet and book launches. It was eclectic, mingling spoken-word, experimental, avant-garde, literary and popular poets.

Audiences were always large, and we often filled the pub. Many people who came along remarked on the remarkably high quality of the open-mic. You can read reviews of Leicester Shindig by Alan Baker here, Matt Merritt here and Pam Thompson here, and various articles by Jayne Stanton on her blog here. In 2014, Leicester Shindig was shortlisted for the Saboteur Award for Best Regular Spoken Word Night in the UK.

Leicester Shindig did not receive funding, and everyone - organisers, publicists, comperes, invited guests, open-miccers - kindly gave their time for free. So thank you to everyone involved. Below is a near-complete list of the many wonderful featured writers, who gave readings at Leicester Shindig. If there's anyone I've missed, please do let me know! 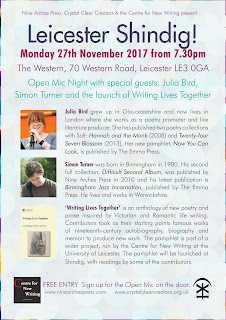 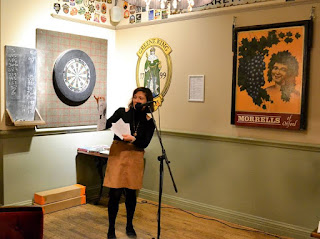 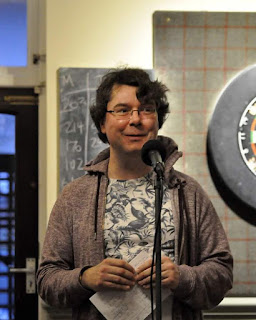 Posted by Creative Writing at Leicester at 02:32 No comments:

Call for Submissions: The University of Leicester Yellow Book 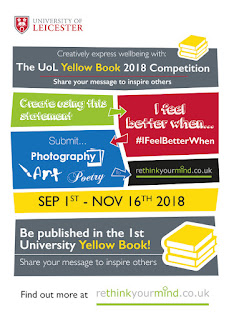 The University of Leicester is collaborating with rethinkyourmind to create the first ever university version of The Yellow Book - and is calling for artistic submissions.

The Yellow Book is a positive, creative resource developed by those with experience of mental health challenges and endorsed by professionals with the aim to educate, aid and support.

The organisers are asking contributors to express well-being by submitting art, poetry and photography that relate to the theme #IFeelBetterWhen. Submissions are open until the 16 November 2018. Submissions are made via the website here. All submitted artwork will be assessed by a panel of local artists, who will select pieces that will form The UoL Yellow Book.

Submissions might be a poem, photo or other visual artwork. You can see examples from other Yellow Book projects on rethinkyourmind.co.uk.

This project is open to all abilities, students and staff alike.

The UoL Yellow Book will launch at the Attenborough Arts Centre on 15 March 2019, with a prize ceremony for those who created the final artworks for the book. The original pieces will be displayed in the Balcony Gallery and will be open to all.

You can see a short video about the project here. 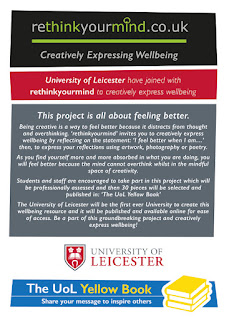 Posted by Creative Writing at Leicester at 05:22 No comments: 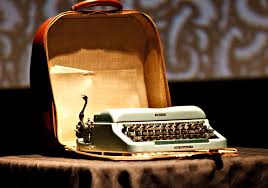 Typewritten Tales is an Arts Council supported Oral History Project about the 1974 Typewriter Strike at Imperial Co. on East Park Road. Participants will learn to conduct interviews with former factory workers. These oral histories will form the inspiration for a dynamic series of local flash fiction events called Typewritten Tales and will culminate in a chapbook publication in partnership with the Centre for New Writing at the University of Leicester. 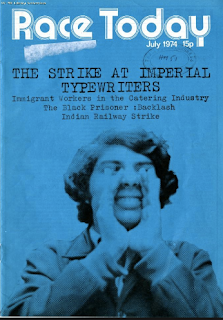 The project kicks off with an Oral History Collection training session led by the University of Leicester’s Oral Historian Colin Hyde. Colin runs the East Midlands Oral Histories Archive and will be training brand new oral historians on October 17th, 1-4pm in The Seminar Room, 3-5 Salisbury Road. You’ll learn about life on the factory floor, race relations in 1970s Leicester, and how the strike affected workers from the city’s settled working-class community and newly-arrived immigrant workers. We welcome a diverse pool of applicants! 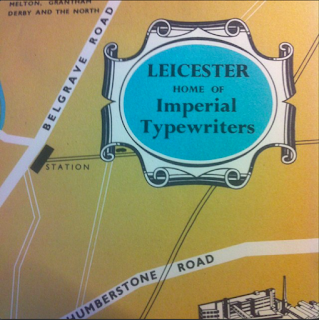 Posted by Creative Writing at Leicester at 23:50 No comments:

"After I Bumped My Head on a Children's Slide," by Meng Wang

Meng Wang (Chinese pen name: Pear Du) is a bilingual writer and poet, born in 1992, from Beijing, China, who enjoys writing love poems. She loves animals, and at home has two injured azure-winged magpies, a lovely squirrel, a chubby cat, a little turtle, and is engaged in fighting for animal rights. She gained her Master's degree in Modern Literature and Creative Writing at the University of Leicester. You can find her Chinese short novels and stories in various magazines and anthologies, including Hua Cheng, Shan Ye, China Southern Airlines, Shanxi Literature, Changjiang Literature and 2017 Youth Literature. Her first short story collection is To Our Favorite Little Butter Biscuits (published 2018).

In the following short memoir piece, Meng Wang reflects on her recent art residency in Spain, and the strange effects and side-effects of a head injury, in relation to creativity. 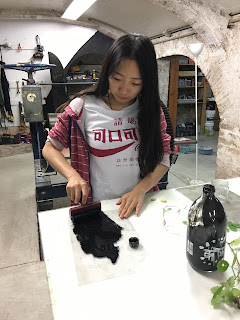 After I Bumped My Head on a Children's Slide, by Meng Wang

If you don’t come to Barcelona now, it will be too late, and the water will get colder ....

In late August 2018, I came to Spain for my art residency at Can Serrat International Art Centre, El Bruc - first re-visiting Barcelona for a few days.

During those amazing and difficult five days, I had endless quarrels with my boyfriend. He wanted to sleep in the airport on the last night, which was totally insane. The rows epitomised our relationship in the first half of 2018. It exhausted both of us, and I even developed an arrhythmia because of it.

Therefore, the residency in Spain was like a escape for me, where I thought I would have a rest, some head space to focus on my art work and writings. So after we said goodbye, he went back to Beijing to his work, and I left for El Bruc for my art residency.

September! Finally! I had a great time with different artists and writers from all over the world and made some good friends. We celebrated my birthday on Mexico's official independence day (what a coincidence), and Australian writer Laura and Canadian writer Marin made me a flower chocolate cake. A talented Hongkong visual artist called Antoine had become my soulmate, and asked me to fry spicy potato slices every day; and a French visual artist Chloé and I were designing an experimental literature art book in our respective languages. 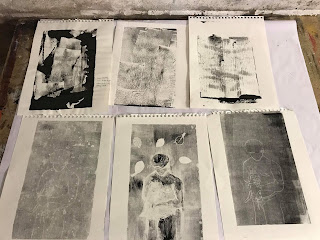 Apart from social activities, I also wrote three short stories discussing urban anxiety in China and drew a series of paintings relating the human nude and the animal. I also picked up my childhood hobby, carving and sculptures. I did some print making by using a mechanical machine.

It was all going so well. Happy times are always short. A turning point came …

"Wake me up when September ends" is no joke - for, on the penultimate day of September, I bumped my head heavily on a bar above a children's slide. It sent me into a kind of sleep, and a kind of waking.

Dizziness accompanies me all the time since the accident. I feel like I’m drunk every day. This reminds me of one of our ancient celebrities - Ran Ji, who drank for sixty days to avoid his Emperor's call.

I went to two hospitals - the first was a clinic in Esparreguera, where the doctor sent me away without a brain scan, telling me to drink Coca Cola and take Betahistina every eight hours. After a few days, however, I got even worse, so our Columbian female writer Paola took me to Accident and Emergency in  De Igualada hospital. There, the automatic coffee machine dispensed - like a present just for me - a beautiful cartoon paper coffee cup, which had a Chinese girl in a red dress with a cute panda. This somehow provided me a little relief - a kitsch reminder of home. The doctor I saw afterwards didn’t scan my brain either; after a basic examination, he just said that the first doctor had given me the wrong medicine, which was hardly a big surprise. Then he sent me away: "Ta ta!".

Now I take Ibuprofen and gelocatil every eight hours. I'm preparing to have a full brain examination and MRI when I return to Beijing at end of this month.

As we left the hospital and waited on the bench for the car to get us back to Can Serrat, Paola suddenly started crying on my shoulder. There was some family trauma, which made me feel sorry for her, and she wrote something in Spanish to memoralise that moment:

The story is a bitter-sweet symphony, though: strangely enough, since I got injured and started taking painkillers, I've become really productive, artistically speaking. In all my dizziness, I write and create even faster than before. There's good and also bad news: I can’t drink anymore, because it can make my brain feel like it's exploding, and I have to write by hand to avoid the discomfort of a computer screen. Funnily enough, handwriting seems to work even faster than typing - very old school. Anyway, now I have at least five different projects on the go: a series of paintings of human nudes and animals; a new full-length novel Beijing Wave, so far written on discarded bits of paper; experimental art books, including carvings and print-making, written in various languages; a new short story collection; memoir writing about my Can Serrat residency and experiences (like this piece!) ....

These ideas force themselves out of my mind every day - so much so that all the artists in our Centre thought that I had made a trade with the devil. Perhaps the devil is my head injury. Now I keep working from the moment I wake up till midnight - only stopping occasionally to contact my boyfriend, who always used to hurt me with his moody attitude, but whose moodiness now compels me to return to my work.

I've also learned my lesson that perhaps I'm a bit too old for children's playgrounds. I’m not a child anymore. 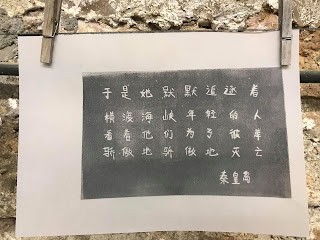 Posted by Creative Writing at Leicester at 04:38 No comments: