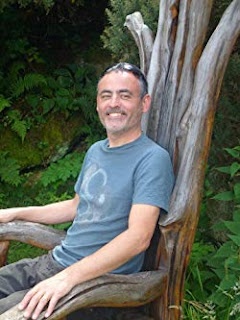 Roy Marshall
After writing poems and songs as a child and teenager, Roy began writing poems again in his late thirties. A pamphlet, Gopagilla,  was published in 2012 and received favourable reviews in the TLS and elsewhere. His first full collection The Sun Bathers (Shoestring Press, 2013) was shortlisted for the Michael Murphy award, and a second collection The Great Animator appeared in 2017. Previously a nurse, Roy lives in Leicestershire where he works in adult education. He sometimes blogs at  https://roymarshall.wordpress.com/ 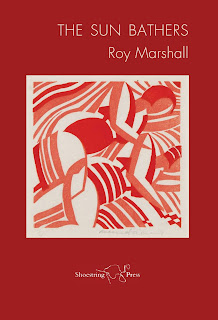 Michael Phelps Versus the Great White

It is hard to get a shark to swim straight,
so the crew speed off with a baited line.
Michael waits his turn, a spring-loaded fin
strapped to his back. He watches the monitors
where his opponent shimmies after the lure.

How beautiful, he thinks, remembering
a Beijing menu that listed shark fin soup.
At school, he too became prey, with his jug ears
and an easily mimicked lisp. One report card read
‘can’t sit still, can't be quiet, can’t concentrate.’

Michael pulls on huge flippers; this is one race
he knows he can never win. He regulates
his breathing, thinks of the money, of how
if a shark stops swimming it dies. 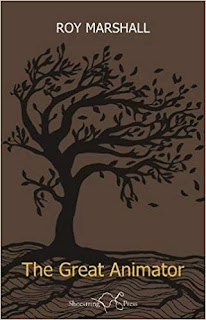 When he was fish, she became otter.
She changed into oak, he, woodpecker.
He shifted to wheat, she cleaved into furrow.
She thinned into leaf, he thrilled as a breeze.
He fell as blood, she received him as sand.
She flitted into songbird, he soared as hawk.
He rolled into rock, she clung as moss.
She rose as full moon, he became the drawn tide.
He changed into a mirror, she, a stone in flight. 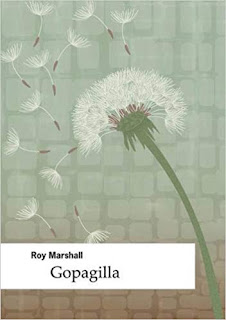 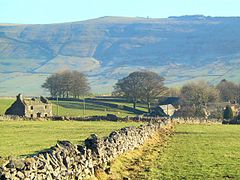 It’s warm in there. Sometimes it steams.
I’ve heard it said, on occasion they
spontaneously combust, but for now
it hosts a family of hares: a central-
heated, albeit pungent, winter abode.
I don’t see them in there, but in the stony
fields, fit otherwise only for sheep
and sometimes the horses, free to wander
as far as Twigg’s land. Then, we have to go
fetch them, trudge through muddied gateways,
past buckled walls, down and up Intake
Dale to where the cowslips grow in Spring.
Lorries trundle from and to the quarry.
Once, I heard of a tailback. Glynn, on a
downwards swing lay across the lane, a sign
by his side read: Please run me over. Isabel
gave up after decades, left for an old folk’s
bungalow down in Bradwell, by the brook.
Can’t have made much, the farm full of cars
rather than cows. One day, someone’ll be
overjoyed to find a nineteen fifties
Hillman, rusted chassis half buried
by a derelict barn. It’s a harsh life, but on a
full moon you’d hear Glynn’s luxuriant
baritone resonate against the stars.

About the author
Lauren Foster is a student on the MA in Creative Writing. 'Coplowdale' received an honourable mention in the GS Fraser Prize 2018. Photograph by By Roger May.
Posted by Creative Writing at Leicester at 09:04 No comments: 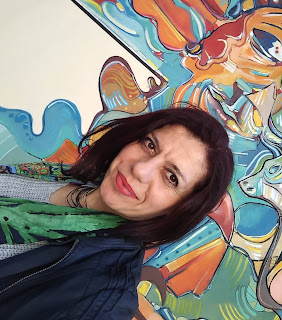 Nora Nadjarian is an award-winning Cypriot poet and writer. She has been cited or published in the Guardian, the Irish Times and the Telegraph and has also won prizes and commendations in international competitions, including the Commonwealth Short Story Competition, the Féile Filíochta International Poetry Competition, the Binnacle International Ultra-Short Competition and the Seán Ó Faoláin Short Story Prize. Her work deals with the themes of women, refugees, identity, exile, love and loss, as well as the political situation in Cyprus. Best known in Cyprus for her book of short stories Ledra Street (2006), she has had poetry and short fiction published internationally. Her work was included in A River of Stories, an anthology of tales and poems from across the Commonwealth, illustrated by Jan Pieńkowski, Best European Fiction 2011 (Dalkey Archive Press), Being Human (Bloodaxe Books, 2011) and Capitals (Bloomsbury, 2017). Her latest books are the collections of short stories Selfie (Roman Books, 2017) and Girl, Wolf, Bones (Armida, 2017). The author Anjali Joseph has said of her work:  ‘Nora Nadjarian’s distilled short stories are abrupt and intense, as invigorating and aromatic as a double shot of literary espresso.’ Selfie and Other Stories is published by Roman Books, as part of the Stretto Fiction Series. 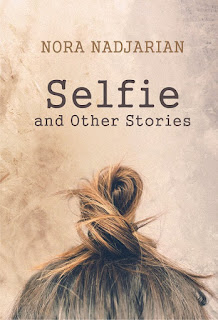 My sister said she was carrying a bird inside her, a bird which would soon be drinking water out of her navel. I wasn’t supposed to say anything about it. To anyone.

“I am a cage,” said my sister. “Inside me I keep secrets, inside me I keep a bird.” And she laughed and I laughed, too. We laughed until we no longer remembered what we were laughing about.

“His name is Sparrow,” she said one day.  “He’s only little now, as tiny as a seed – but he’ll grow and grow, you’ll see. And then I’ll set him free.” She placed her hand on her stomach and her mouth curved upwards, as if she were smiling at another world in the mirror.

I couldn’t wait. Time was too still, it was taking too long. I squinted into the future. “When?” I kept asking. “When, when, when?” My sister looked luminous as she replied: “Soon, soon, soon.” She said he was practising a song for us. “He’ll sing it so well that he will astonish us all.”

Time passed. I rode my bike and I skipped and whistled and played and waited. Sparrow was going to be my small gift for keeping my sister’s secret. The air grew heady and my sister soft and heavy, like ripening fruit. When she fluttered her eyelids, I thought she was dreaming with her eyes open.

It was the longest summer. My sister turned sixteen. She wore a long, flowery dress, put her hair up in a ponytail. There were sixteen pink and red balloons bobbing around her head that hot, sticky afternoon of cake, cellophane and candles. My mother spoke loudly and happily about nothing and everything, my stepfather handed my sister the knife, helped her cut the cake. Then she said: I have an announcement to make.

And the world stops there, a sharp intake of breath.

I squint into the past now for details, terrified of what I might remember. The sky is a dazzling blue, the earth hot, sweaty. I am pregnant, says my sister. She wears a necklace of grapes with which she will feed Sparrow. She performs her own birthday song beautifully, she sings her heart out – until her throat is chalk dry and her ribcage breaks. There are feathers everywhere. I run to pick them up as the balloons pop one after the other, leaving sixteen pieces of rubbery flesh on the floor, things torn and shapeless, parts of my sister which will never again be whole.


I sit beside her and ask if it hurts. She whispers: “Truth always hurts.” Then there is a sudden, white silence which reminds me, years later, that she is no longer here.


Posted by Creative Writing at Leicester at 02:05 No comments: