"The Looter": A Short Story by Aiysha Khan

Aiysha Khan is a MA Creative Writing student at the University of Leicester. She is enjoys writing horror stories and psychological thrillers which have unconventional twists, and that reveal parts of human nature and intense emotions not experienced in every day life. She is currently working on a short story collection and collaborating with an illustrator, to creative a graphic novel. The following story forms part of her Creative Writing Dissertation. 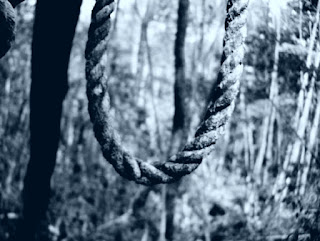 He walked into the forest at the crack of dawn as the early morning light crested over Mount Fuji. He was going to score big today, he just knew it. September had the highest yield of any month; he’d definitely find a few mobile phones and iPods, hopefully some expensive jewellery and maybe he could steal an abandoned car. His hands started to twitch at the thought of treasure lying a few steps away, ripe for the taking.

Before he took off down the path, he gave a quick look to his left and right. The last thing he needed was a police patrol coming his way. They might think he wanted to kill himself.

‘No Keiji-san, I’ve just come to loot the bodies …’ Yeah, that would go down well.

With this in mind, he crept down the path and passed a bunch of wooden signs along the way.


YOUR LIFE IS A PRECIOUS GIFT FROM YOUR PARENTS

caught his eye as he passed a sign and he shook his head at how feeble these words were. A precious gift from your parents. ‘No. Your life is your own,’ he thought. Not that he particularly cared, he was here for one thing and one thing only. Money.

He had walked for about an hour before he decided it was time to venture off the path. When he thought he had found a good spot, he opened up his satchel bag and took out a roll of neon pink tape. He wrapped it around the nearest tree multiple times, to make sure it was secure. With a final tug, he set off from the path and meandered his way across roots and lava rock. The forest was silent. All that could be heard was the crunching of twigs underneath his booted soles. He nearly fell a couple of times and cursed out loud, kicking loose rocks and roots that threatened to topple him. He carried on like this for some time, unwinding the pink tape behind him, before he saw something through the trees that caught his eye. A yellow tent. He hurried over towards it but as he got nearer, he crouched down and watched for any movement. The last thing he needed was for someone to actually be in the fucking tent.

He crawled through the trees, around the tent until he came to the entrance. It was empty. He got up and went to investigate. He found old men’s clothes, papers and a book. He picked up the book and turned it over. Kuroi Jukai by Seichō Matsumoto.

‘Of course, it fucking is,’ he whispered as he tossed the book to the ground. If there was one thing he was definitely going to find on his little raids, it was always Kuroi Jukai and Kanzen Jisatsu Manyuaru by Wataru Tsurumi.

‘If these guys knew how literally people took their words about this place, would they regret writing their books?’ he wondered, before he concluded, ‘Probably not. They’ve made a shit ton of money.’

He left the tent and, to his right, he saw a yellow line of fresh tape leading further into the forest. Maybe the tent guy was up ahead? He decided to follow it. He left the pink tape, which had practically run out, for the yellow one, ducking under branches until he came to a stop. Hanging from a tree in front of him was a body. He could see a glint of metal on its wrist. He hurried over and saw it was a watch. It wasn’t anything fancy but it would get a few thousand yen if he flipped it to the right person. He went to reach for it, but he stopped as he realised the wrist was still warm.

The Looter took a step back and looked at the body in front of him. Usually, he didn’t care. They were just corpses, rotten and deformed, no longer human. But this one had been alive not too long ago. Something on the ground caught his eye, and he noticed a brown, leather wallet. He opened it.  Inside was a few hundred yen and an I.D.

According to the I.D. the kid was sixteen years old. Sixteen years old! What could a sixteen-year-old possibly have to worry about that they needed to hang themselves in a place like this? Itsuki was spelt with the kanji 一喜 meaning ‘One and Only Happiness’. How insulting. He placed the wallet back on the ground and looked at the body once more.

‘Well, Itsuki-kun, you’re one with this Sea of Trees now. You probably won’t be found and your body will swing here as it rots. Is this what you wanted?’

He shook his head as he watched the body sway. His eyes darted towards the watch and the wallet, but he thought to himself, ‘Not this time.’

The Looter looked around the forest once more before he set off back the way he came. This place was giving him the fucking creeps.

Posted by Creative Writing at Leicester at 13:01 No comments:

Sonia Tailor is studying an MA in Creative Writing at the University of Leicester. She is a peace activist who enjoys writing short stories and monologues. She has organised vigils and demonstrations, and in 2007, she travelled to Jordan to make a documentary about Iraqi refugee children. For many years, Sonia was the Youth Page editor for Peace News (newspaper) and she currently runs a book blog on Instagram: @soniareads.

Below is a story-monologue she has written for her Dissertation. 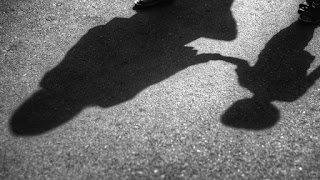 I’m woken by the airhostess taping my shoulder.

‘Here’s your vegetarian meal, Mrs Abbas,’ she says. She hands me a compressed curry with a small bun.

‘And here’s your food, Miss Abbas,’ she says with a huge smile. She hands Aaliyah a smaller version of my food and an activity pack.

‘Thank you, Miss Aeroplane Woman,’ replies Aaliyah, who’s sitting next to me.

‘You’re very welcome,’ says the airhostess as she walks away with her trolley.

I give Aaliyah a kiss on her head and unwrap her food. She has my headphones on and is happily nodding to Bebe’s ‘No Broken Hearts’. This is one of her favourite songs. Her father, my husband, introduced it to her. Every Saturday he would play pop music on his laptop and Aaliyah would dance with him. Then the next Monday Aaliyah would always tell her class about the different songs they danced to.

Bebe’s song was also playing in the car when my husband parked at Heathrow airport this morning.

‘Daddy, daddy, please come to holiday with us,’ said Aaliyah. My husband turned down the radio.

He squeezed her tightly. ‘Sorry I can’t come, my cutie pie. I have very important work things to do. But I hope you have a really nice time. Love you so much,’ he gave her a loving kiss on the cheek. ‘You mean the world to me.’

He then looked at me with his deep, brown eyes.

‘Have a good time, Amina,’ he said. ‘Say salaam to your Mum and Dad from me, yeah? I’ll pick you guys up at the same spot when you get back.’ He gave me a hug and a quick peck on the lips. His touch, warm. His lips, tender. My handsome, cheating husband.

Aaliyah’s given up on the curry and is now colouring in a picture of an aeroplane from the activity pack.

‘Can I show this picture in show and tell in school when we come back to England?’

It’s then that I tell her: ‘We’re not going back, honey. Pakistan will be our new home from now on.’

Posted by Creative Writing at Leicester at 02:17 No comments:

Short Film about the MA in Creative Writing

The University of Leicester has made a new short film about the MA in Creative Writing, which you can see here:

It can also be viewed at this link:

Many thanks to current MA in Creative Writing student, Sonia Tailor, for talking so eloquently about the course.