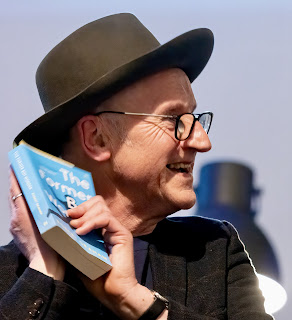 Robert Graham is the author of the novel Holy Joe; the short story collections The Only Living Boy and When You Were a Mod, I Was A Rocker; and the novella A Man Walks Into A Kitchen. His play about fans of The Smiths, If You Have Five Seconds To Spare, was staged by Contact Theatre, Manchester. He is co-author, with Keith Baty, of Elvis – The Novel, a spoof biography; and, with Julie Armstrong, Heather Leach, Helen Newall et al, of The Road To Somewhere: A Creative Writing Companion, Everything You Always Wanted to Know About Creative Writing, and How To Write A Short Story (And Think About It). He grew up in Northern Ireland and for most of his adult life has lived in Manchester. He teaches Creative Writing at Liverpool John Moores University. For more information please see his website here and follow Robert on Instagram @robert55graham.

Below, you can read more about his new novel, The Former Boy Wonder, published in 2022 by Valley Press. 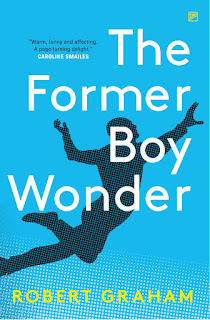 About The Former Boy Wonder, by Robert Graham
My novel offers an insight into the way a man’s mind and heart works – not always with great wisdom. Mid-life crisis men who, failing on many levels, seek comfort in chasing after the ghost of their first love cause a lot of pain to the women who live with them. These men are also ridiculous. Because many have experienced it, this theme may appeal to women readers. It may also appeal to men who are having a similar mid-life crisis.
Peter, the protagonist, is a romantic who is also needy and a bit of an idiot. The novel leans towards the side of the women in it, but at the same time, Peter is funny and has a fair degree of charm. So many readers won’t like his behaviour, but they may end up on his side – even though they will know he is heading towards a self-inflicted disaster.
Peter’s attitudes and behaviour are not uncommon in mid-life men. Research shows that men often romanticise their first loves in a way that women don’t. To that degree, he may resonate with both female and male readers. Some will have experienced what happens when the dying of the light causes them to make foolish decisions while others may relate to frustrations and temptations my protagonist experiences in the course of the novel.
From The Former Boy Wonder
I was a romantic boy, looking for some whispered mystery, hungering for wonder. In my teens, I had a flickering dream about the fabulous girl who would someday appear. I would see her and recognise her, and life would finally begin. For years before this dream, though, I believed I lived under an evil spell. I had been the little prince, the apple of my father’s eye, and then he left. The little prince had lost his kingdom; he had been a happy little boy before it all went wrong. By the time I went to college, my circumstances had primed me to be rescued, reborn once I met this fabulous girl. She would appear before me, I would be hit by a bolt of lightning, fall for her in a heartbeat. That was the dream.
Manchester was bigger and more exciting than Belfast, any day. I arrived at the Poly and entered a new universe. In Manchester, nobody blew up bus stations and people didn’t shoot each other. Over here, it was safe to go out and have fun. British bands, the ones I listened to and read about pretty much never came to Belfast. The only gig in town was Rory Gallagher, who played the Ulster Hall at least once a year and swept audiences away, but that wasn’t much compensation for living in a musical ghost town. Yes, British bands who would risk their necks to come over were as rare as a solar eclipse, but every UK tour came to Manchester. Not many years before, I could have caught Bowie’s Ziggy Stardust tour at the Hard Rock in Stretford, and a few years before that somebody shouted ‘Judas!’ at Dylan in the Free Trade Hall. This was the place where the magic names in the NME walked off the page and into a venue that was only a bus ride away.
Posted by Creative Writing at Leicester at 08:58