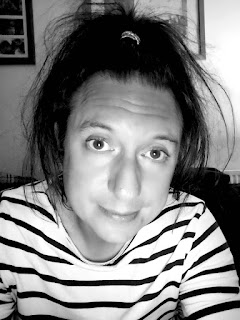 Pete Green is a poet and musician who writes about place and identity, finitude, coastlines, cities and landscape change, trains, birds, and sleeping on someone's floor after playing a gig in another city. Their new short book Hemisphere and pamphlet Sheffield Almanac are published by Longbarrow Press, and their poetry has also appeared (or is scheduled to) in Under the Radar, the Fenland Poetry Journal, Stand, Anthropocene and elsewhere. Pete was longlisted in the 2020 National Poetry Competition and shortlisted for the 2019 Brotherton Poetry Prize. They live in Sheffield on the side of a very steep hill. Visit Pete's website at petegreensolo.com and follow @petenothing on social. 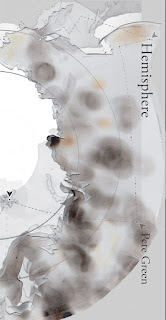 About Hemisphere, by Pete Green

Hemisphere is a long poem in a short book, telling the story of a circular voyage which proceeds from the Hebrides around the north Atlantic, Alaska and Siberia, then finally back to Europe. Along the way the protagonist visits a doomsday seed vault, a giant qwerty keyboard, a boundary between Tuesday and Wednesday, the world's largest island on a lake on an island on a lake on an island, two pubs and an Arctic coffee bar.

These are all real locations on an impossible journey. Ultimately Hemisphere is a sort of meta-travel narrative which poses questions about who has permission to practise place writing, and explores the power of imagination to push back against our ongoing personal lockdowns.

You can read more about Hemisphere on the publisher's website here. You can watch a short trailer for the book here:
Below, you can read an excerpt from the book.
From Hemisphere
Vladivostok
43°06’43”N 131°52’55”E
Was it a crash or a signal failure? Was it
the whim of some fastidious ambassador
that bore you here? Was it that metallic
clang, unexplained, that rang out between
the islands at the Bering Strait’s midpoint
like the song of a valley floor steelworks?
A deleted vault at the radar’s perimeter
fence? Whatever. Your hand is returning
to your jacket’s inside pocket, where your
ticket radiates assurance. Steel blue-clad
officials have already trooped the length
of your carriage several times; their gaze
interrogates the space you occupy, as if
you are not there. Across the aisle, though,
a woman’s complexion is fresh snowfall;
her eyes are feline, opalescent, much like
Kate’s, and they watch you checking out
the space. Your seeming aplomb prevails.
Your research’s thoroughness outweighs
all the Transsiberian-based thrillers where
naïve westerners are doomed to succumb
to menace or the mere threat of menace,
but you were caught out by the railways’
adherence nationwide to Moscow time
which, at this longitude, gave seven hours
to contemplate the famous hipped roof
of the station, the massive red characters
of its Владивосток sign, their unwieldy
ornateness, the earthenware flagstones
brought from Japan, painstaking mosaics
of berries, fruit and horsemen – all of it
biography of Russia, layered narratives of
regimes, of reinventions and revisionisms,
the wool that’s tugged down over eyes,
the emollient layers of pearl that cancel
disagreeable grains. You know the power
of opalescent eyes, of vodka, of people’s
own readiness to swallow what is served.
For you the cracks appeared back when
the bankers tanked the whole shebang
and chancellors and governors discreetly
summoned bailout billions from the ether
with mouse clicks and commands while
the clinic closed its doors on you during
that fragile first trimester. The ticket man
comes through from the first-class coach;
with him the notion of an upgrade, using
a little quantitative easing of your own.
You imagine requesting the kitten-eyed
woman to join you, knowing full well
that for better or for worse you will do
no such thing – and that’s one more life
thrown under one more cancelled train
of thought. So was it a crash or a failed
signal? Was it one more hardware glitch?
Your vigilance will bear you on through
Khabarovsk, Irkutsk, the room’s perishing
cold account for Omsk, Novosibirsk, and
the frustrated force of all your bloody-
mindedness can see you through the rest.
Posted by Creative Writing at Leicester at 08:19