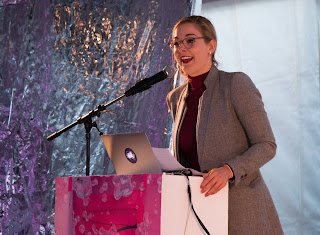 Hannah Nicklin is an award-winning narrative and game designer, writer, and academic who has been practising for nearly fifteen years.

Trained as a playwright, Nicklin moved into interactive practices early on in her career and is now the CEO and studio lead at Danish indie studio Die Gute Fabrik, which most recently launched Mutazione in 2019.

You can read a previous article by Hannah Nicklin about Mutazione and game design on Creative Writing at Leicester here. Hannah is on Twitter @hannahnicklin 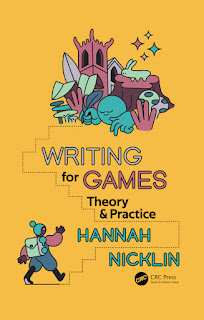 About Writing for Games: Theory & Practice, by Hannah Nicklin

Writing for Games is an approachable and entry-level text for anyone interested in the craft of writing for videogames.

Focussing on the independent videogames sector, this book provides readers with a vocabulary to articulate and build their games writing practice; whether studying games or coming to games from another storytelling discipline. Writing for Games offers resources for communication, collaboration, reflection, and advocacy, inviting the reader to situate their practice in a centuries-long heritage of storytelling, as well as considering the material affordances of videogames, and the practical realities of working in game development processes.

Structured into three parts, Theory considers the craft of both games and writing from a theoretical perspective, covering vocabulary for both game and story practices. Case Studies uses three case studies to explore the theory explored in Part 1. The Practical Workbook offers a series of provocations, tools and exercises that give the reader the means to refine and develop their writing, not just for now, but as a part of a life-long practice.

You can read more about Writing for Games here. Below, you can read an excerpt from the book.

From Writing for Games: Theory & Practice

This extract is from the very beginning of the book, where Hannah Nicklin lays out some useful first principles; this part is from pp.23-25 of the book, where she differentiates writing from narrative design, consider the layers of writing in a game and discuss why vocabulary in talking about the craft of both writing and games is vital for its practice.

The Material Context of Games

The next few chapters will cover a variety of essential vocabulary in specific areas: from games studio structures, to story structure, and story components. But before we run the gamut, I wish to lay down one more set of foundations about storytelling in games.

Here’s the most important thing: Games are really hard to make.[1]

Theatre is also hard to make; dance, ceramics, quilt making, all of it. I know. All media and art forms have their own challenges, but when you make a film, sure, you have to write a script and hire actors, and direct and film and edit. But you don’t also have to invent gravity, and build the actors as puppets made out of flesh and bone and weird perspectives.

That you have to define ‘up’ and ‘down’ and ‘sky’ and ‘ground’ is also part of the joy and inventive potential of games, but please believe me when I say the defining thing about game development is that it is a goddamn miracle if any game functions at all, and still if it functions on most computers, most of the time.

It can take half a year for a team to resource, design, implement, and fix the display of italics in onscreen text (this happened to me). It can take several months to build the tools for defining the logic of, implementing, and displaying a character’s dialogue in the right format. A large part of game development is project planning, MVP[2], and communicating with others about what’s needed, what’s a priority, and when a change is being made – so that other departments can understand how it will have a knock-on effect.

The material context of writing and storytelling in games is that you rarely work alone – especially as a writer – and the practice of writing will as much be about communication, priorities, project planning, spreadsheets, and resources, as often as it’s about being able to actually do it.

Then you face the huge lack of common vocabulary for what we mean when we talk about story in games.

Narrative Design Is Not Writing and Vice Versa

Writing is not narrative design, and narrative design is not writing. One of the common misconceptions in videogames around storytelling is that narrative designers can write and vice versa. Sometimes you get people who do both (often you will be expected to be a dual narrative designer / writer in a small indie development team), but this problem is endemic and often means that the actual brief or recruitment copy for a piece of work isn’t clear about what’s wanted. And it’s even possible the people writing the job description don’t know what they need.

So, let’s set this out as clearly as possible; in this book, these are our definitions:

Even if you are practising – or wish to practise – in both of these areas, separating them is extremely useful, as you will develop both strands through different processes, and both will provide different solutions to a challenge or problem. It’s also useful to be able to articulate the difference to others. If you’re hired as a narrative designer, but the team that hires you isn’t willing to include you in design discussions or consider design proposals from you, then you are not actually being given the means to do your job. If you’re hired as a writer, but someone is suddenly asking you to co-design a dialogue system, it can be empowering to assess that as a narrative design task and ask for more resources (money, time, or hiring a collaborator) to do so.

The Different Layers of Writing in a Game

Not all writing is storytelling. Some writing will be a part of communicating how the player should and can interact with the interfaces and mechanics of a game. One affordance of writing for games is focusing on the utility of your writing. A game may need several levels of ‘voice’ or ‘register,’ from the ‘creative’ register of the story and its characters, to the register of tutorial instructions, UI, inventory descriptions, and quest reminders. Sometimes they combine in conventions such as inner monologue – in many games, characters will converse naturalistically in all manners except that the player character will also talk out loud to themselves in an extremely unnaturalistic manner in order to give the player hints and reminders. And the writing of a UI text is not a simple thing – it is a sub-discipline which also works with genre and formal conventions.

When writing for a game you will need to think about how these registers intersect. Perhaps you’re writing for a game where the characters individually don’t have distinguishable voices because the game voice is the important thing (this is most common in jokey or internet- humour-driven games, where the voice of the game is referential, and characters frequently break the fourth wall). And don’t forget – your choices (if offered) will have a register too! Does the game UI describe the choices, or does a narrator in the world offer them or does the character? Following is one choice expressed in three different kinds of ‘voices’:

You also need to think about how the writing in the game sits in the layer of importance for the player. Are they front and centre (in a story-driven game), are they holding two parts together (cutscene writing), or are they part of the supporting framework (a small dialogue encounter in a puzzle-driven game, or ‘barks’[3] in a battle)?

For example, games with puzzles can be simplistically split into story-driven and puzzle- driven. In the former, all the puzzles should move the character or the story forwards; in the latter, the joy should centre on a puzzle well-solved, and the writing is more focused on a supportive background for the puzzle-solving. Neither of these approaches are inherently better – instead consider the effect you want to have and how the working with the affordances of your game can help you achieve it ...

Why Is Vocabulary Important?

The key thing about working in games is that it’s an extremely broad interdisciplinary practice, so it will be common for you to need to communicate with people with widely different training and media / artform backgrounds from you. Understanding the vocabulary of game development will help you understand what kind of background or foundation from which a person might be speaking to you. This will be the subject of Chapter 2.

The act of learning the basic building blocks of storytelling vocabulary benefits everyone; if you are already a game developer without story expertise, it will allow you to understand the storytellers you communicate with. If you are someone who wants to tell stories with games, understanding the specificities of storytelling deeply enough to communicate them clearly will help you fight for the story in the design meeting, development process, and the game’s production. This will be the subject for Chapters 3 and 4 – the first is a grounding in story structure ideas, and the second a run through key story components.

As a writer it’s vital to be able to articulate your practice to yourself and your peers – not only does it help you practise your craft more effectively, but it also allows you to better critique (crit)[4] other works, and therefore understand how they have their effects, and in turn help you better understand how you can learn from them.

[2] Minimum viable product: part of the Agile practice of design. The idea is to make the design idea, tool, or piece of gameplay in its most minimally functional way, and then to test or play it in order to know in which direction to improve and build on it.

[3] Barks: One-off lines which reinforce character and the drama of a moment, delivered not as part of conversation, but to liven up travel, battle, or the exploration of an open world area.

[4] I set out a detailed proposal for a critical methodology in Part III of the book, but for now we can loosely define ‘crit’ as the practice of analysing and understanding how a work uses its affordances to achieve its intended effects. 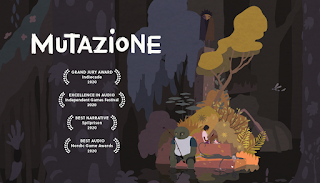 Posted by Creative Writing at Leicester at 08:24