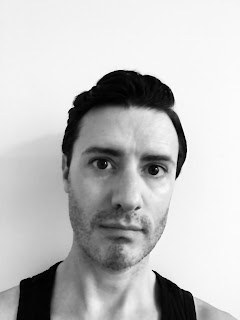 David Tregarthen is a writer, singer, accompanist, and tutor. He grew up in the North of England, studied at Oxford (where his novel Come the Dark Night is set), then worked for several years as an academic in the Midlands. In the past year he's taken some time out to travel (where the global pandemic allowed) and pursue his other interests. As a creative writer, he's interested in identity, truth, nuanced queer characters, and what (if anything) makes psychopaths different from the rest of us. Come the Dark Night is his first novel and is published by Bloodhound Books. He can be found on Twitter @davidtregarthen 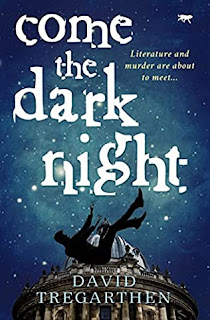 About Come the Dark Night, by David Tregarthen

In this sophisticated novel of suspense, a killer with a taste for literature lurks in the shadows of Oxford University ...

After a student is found decapitated in the cupola of the Sheldonian Theatre and a cryptic note in an unknown language is discovered, DS Kate Stewart and her partner turn to medievalist Dr. Jonathan Reynolds. He identifies the note as a passage from Beowulf and explains that the murder replicates a killing in the epic poem.

Then a second, equally grisly murder escalates the situation. The victim is Tom, Jonathan’s former student and stalker. Horrified, Jonathan identifies the crime’s literary connection to another early English poem. Is the killer obsessed with medieval times—or with Jonathan? When another death suggests that a serial killer is working his way through the English Literature syllabus, both the police and the scholar are drawn into a baffling mystery ...

From Come the Dark Night

I look down from my vantage point high above the city, scent the early morning air and smile. It will be another of those sultry days that spring borrows from summer. On such a day, the air holds out the promise of a time beyond the teaching term that has just grudgingly begun; beyond the testing, fraught, close-knit days of Finals; beyond even those precious weeks of quiet libraries where dust motes dance as scholars snooze. On such a day, the illusory prospect of drifting on a peaceful river or browsing in bookshops along deserted lanes has not yet been shattered by the squalid reality of building works and the blind hunger of the omnipresent crowds. And on this day it is that I – or rather my Work – shall be seen.

I walk back across the wooden floor, carefully lift and place the head to one side, then take a moment to rest from my labours. As the young April sun rises over Oxford’s spires and bell towers, my city is neither dreaming nor sleeping. Whilst darkness and quietude still prevailed – though I, of course, was busy about my Work – three dozen college porters waited patiently within the establishments they guard. Now, as the bells of Tom Tower and a hundred churches strike their conflicting chimes, these men begin to unlock the smaller wickets set inside the great iron-studded timber gateways. The more famous – or cupidinous – colleges ‘fling wide their gates,’ knowing an influx of tourists waits to make its less than royal way. Agog to consume cultural capital, the sheep will stream inexorably in from early morning until dusk: from the grubby ring road and coach parks and railway station. Within each college, gardeners are doubtless hard at work weeding borders and mowing precious lawns still thirsty for the month’s promised ‘shoures soote.’ Scouts and bedders begin to scrub porcelain and polish stainless steel – or so I imagine. I do not know the truth of it. Perhaps they are instead counting out linen for distribution amongst the students in their charge – most of them still dead to the world, it’s safe to assume, bins outside their rooms to guard against unwanted intrusion. Excluded here, of course, the chasers of Firsts already annotating texts in quiet carpeted libraries, the earnest chapelgoers kneeling in prayer, and those Lycra-clad rowers quick-stepping it to the cold river. I see one now, cycling along the pavement, weaving between concrete bollards, almost close enough to … but, no, I must not allow myself to be distracted.

I hammer in the spike, muffling the sound of metal on iron with his scarf, then rest again. As I wait, silent and unseen, elsewhere cheerful shouts, ribald laughter, rise from the meat stalls in the Covered Market and the kitchens they stock. Along Catte Street and Cornmarket, Broad Street and the High, the thin light shines down alike on saints peering myopically from their niches in the church towers, and sinners, scurrying back from strange beds, rumpled-black-jacketed and pallid-faced. Loathsome in their petty deceit. Ants, all of them, waiting for one divine foot to mash them into the cobbles of Radcliffe Square.

My breath returns and I begin to pack away my tools. Nearby, the Old Bodleian’s great quadrangle lies yet hushed, as lonely staff dribble their way past old Pembroke’s statue. He stands now in shadow, impassively watching over the doorways with their neatly painted homage to the Old Schools, as he has done since his translocation in the Year of Our Lord 1723. Nearby, the sun’s warming rays slide tentatively up the wall of the Sheldonian Theatre, past its encircling grotesques with their gaping mouths, till they reach the cupola’s arched windows and pale-green dome, high above the waking city. My mouth waters. Soon and very soon.

Posted by Creative Writing at Leicester at 01:22