On Running a Literary Festival 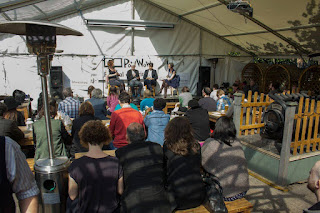 What are literary festivals for? What do they do, and why? Are they a fundamentally democratic element of our literary culture, or an adjunct to the marketing departments of corporations? Do they exist to perpetuate or challenge intellectual conformity? Can any of them be all things?

In 2011 I decided to try to find out, and established one of my own. The PowWow Festival of Writing was set up by me and Andy Killeen. We had each just published our first novel, respectively an historical comedy set in 11th-century Baghdad and a fictionalised account of the anti-road building and free party protests of the 1990s. Our books were with small publishers, Dedalus Books and Indigo Dreams Press, and they had yet to reach the bestseller lists. We were interested in creating an event that was an ethical antidote to the commodification of literature, one that celebrated the overlooked and also provided practical support for those who aspired to be disregarded; it was also an attempt to fill the restless emptiness that follows publication of a novel.

The event took place in the back garden of the south Birmingham pub where Andy ran a writers’ group. Its name presented itself to us as if on a gold-tasselled cushion (Prince of Wales Writers on Writing – or PowWow) but we had no money, few contacts in the biz and no experience of organising anything more complicated than a barbeque. The first programme then, was an ‘organic’ affair. Andy knew William Gallagher, who had written radio scripts for Dr Who, a fella from The Fall, and SF Said, a mate from Cambridge who had just won an award for a children’s novel; I met the poet Charlie Jordan at a party, and suggested for the role of host Dan Holloway, a Facebook friend and the author of evie and guy, a wordless novel consisting of ‘the dates, times and duration in seconds (bracketed where the act was interrupted or unclimactic) of every act of masturbation in two lives.’

Given that there wasn’t too much content that was actually related to literature, we decided to sell the festival as a ‘Literary Cabaret’ and padded it with a capoeira demonstration and a DJ set. The centrepiece, though, was a writing competition. For this, competitors would produce a number of stories throughout the day that would be judged, live on stage, by me and Andy. It was an equivocal success. In devising the format, I had forgotten that I would be drinking steadily over the course of the do, a circumstance that led to a profound deterioration of my critical faculties. Andy’s contributions were conscientious but by the time we reached the final three stories, my slurred pronouncements were met with incredulity and abuse.

Despite this, we decided the festival had enough going for it to do it all again the following year. With a few caveats. If the ‘informality’ of our first effort had established our unique selling point, it was clear that we would be ill-advised to attempt to replicate it. It was unthinkable, for example, that we could hold another event without paying either ourselves or our guests. We established an organising committee, drawn from Andy’s writing group, and applied for funding from the Arts Council. This was an interesting process. Although – or perhaps because – we were committed to the principles of ‘community’ and ‘diversity,’ it dismayed me to have to include the words in every other line of our proposal. Still. We got the money we asked for. We also devoted similar attention to the make-up of the programme. Although we were mindful of the need to feature better-known guests, we were keen to avoid inviting anyone too ‘obvious’ and plumped instead for a bestselling writer of crime fiction whose work could also lay claim to that most nebulous of characteristics – literary merit. Unfortunately, four days before they were due to headline our second festival, they found themselves in a little local difficulty, involving pseudonymous praise of their own work - and criticism of others - and bailed.

Me and Andy had no contingency for a turn-up like this. Faced with the possibility of a festival with no headliner – and the logistical mire of refunds – we considered joining our erstwhile star name in retiring to a darkened room. But, true to the DIY spirit that had created the festival in the first place, we hung on and hoped something would turn up. Fortunately, it did. That year’s Booker Prize shortlist had just been announced and on it was Alison Moore’s small but perfectly formed The Lighthouse. I’d read it and loved it, so chanced an email to Salt, her publisher. With barely five days to go, the arrangements were made and we had a more than adequate replacement for our rogueish no-show.

I’d like to think that Salt saw us as a kindred outfit operating outside the literary establishment. It was perhaps more likely that our timing was accidentally impeccable. Either way, buoyed by our last-minute extrication from a tricky situation, hubris took hold. The next year, in looking to increase our private sector sponsorship, we ditched the coffee shops and vintage toy sellers who had previously backed us and approached a banking and wealth management company. The question of their suitability for an operation as ethically-minded as ours was resolved by Googling ‘are they ethical?’ and spending a full minute on analysing the results (I mean they seemed fine). We also expanded. The Saturday before Sunday’s do we put on workshops at a venue down the road from the Prince. On the day of the event itself we offered merchandise – tote bags and tee shirts – and arranged for each session to be filmed by students of Birmingham City University. All of which served to simultaneously impress and confuse that year’s guests – who included M. John Harrison, Katy Guest and Danuta Kean – for whom the hoopla might have been at odds with the size of the operation.

Because that year’s festival was a bust. The workshops didn’t fly. No-one wanted to Meet the Editor. A quick headcount on the day of the festival proper revealed more paying punters than merch-sellers and film crew and merchant bankers - but only just. Again, we learned. The next year, we were back down to a day and binned the fripperies.

We continued for another four years. The last PowWow Festival of Writing took place in 2017. I like to think that we gave many writers ideas and a good day out. We were proud to feature guests from communities traditionally under-represented in mainstream publishing. With the exception of our third year, our audiences regularly hovered around the hundred mark. Personal highlights included Alex Wheatle, Natalie Haynes and the publication of an anthology put together from the contributions of guests. Joanne Harris – who we bagged after three years of invites – was a no-bullshit joy. Likewise Kit de Waal. Arifa Akbar was fascinating. Nicholas Royle indulged his affinity for the derive, refused the offer of a bus or cab from town and walked to us instead through the derelict warehouses, the abattoirs and the curry houses of Brum’s unfamiliar inner-city; the screen-writer Andrew Davies asked for payment with a bottle of single malt. Stewart Home read standing on his head and Elizabeth Jane-Burnett was as mesmerising as ever.

The festival’s demise though, was inevitable. In the six years of its existence, the event had outgrown its original model, in relation to both budget and venue and we had neither will nor desire to move premises or apply for the necessary jump in funding. What had begun – at least in part – as a project that might complement our writing now required too much unremunerated time and attention. For all of our comparative pulling power – our appearance fees were a source of much pride – a significant number of London-based agents and PR people were unwilling or unable to sell to their charges a trip to a Birmingham pub. After the boss of our sponsor, the investment company – a man of Quaker sympathies – turned up one year to find me with a pint on the go (ironically enough my first, at 6pm), he pulled the plug.

There was also the management of the Prince’s daytime drinkers to consider. The festival took place in a marquee, but the pub’s garden was otherwise open as usual. Over the course of a long Sunday afternoon, the regulars could get as lairy as a short story judge, which had implications for the ‘Customer Experience’ of the festival crowd. The needs of the two groups weren’t reconcilable. Even if there was only ever going to be one winner from the encounter between Joanne Harris and the fella in the Villa shirt, who wandered into the marquee and enquired sneeringly of her ‘Am I supposed to know who you are?’ 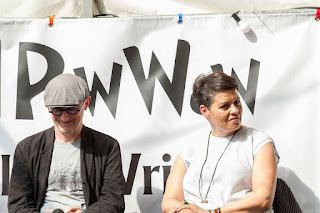 About the author
Charlie Hill is the former Director of the PowWow LitFest. His most recent publication is a memoir - I Don't Want to go to the Taj Mahal - and he has an historical novel and a collection of short stories in the pipeline. His website is here.
Posted by Creative Writing at Leicester at 06:55