In the following article, Hannah Nicklin, Writer and Narrative Designer on the multiple award-winning and most-nominated at the IGF awards video game Mutazione, talks about storytelling craft in games. In particular, she discusses the narrative design choices and motivations for what she calls her 'multiple middles' as opposed to 'multiple endings.' The article was first published on Die Gute Fabrik's website here. 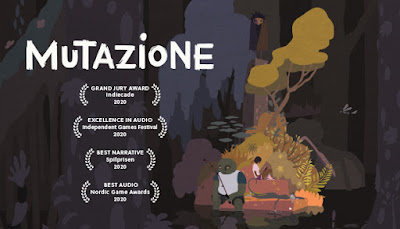 As part of the Narrative Innovation Showcase I was asked to prepare a 15 minute talk on a key design decision on Mutazione – I chose the narrative design of the player’s agency within the story, which uses a format I like to call 'Multiple Middles.'

One of the first things you’re often asked about interactive narrative is ‘how important are the choices,’ ‘do they matter?’ I’d like to think all the choices characters make in a game ‘matter,’ but the amount of control you have over them, and what they in turn affect, is often seen as the sum of how complex or accomplished a piece of narrative design is. A lot of games discourse tends towards judging the accomplishment of games on how close they get to the ‘real’ world of choice and consequence.

But sometimes abstraction rather than simulation or linearity, as opposed to branching, is a more useful storytelling tool.

In my opinion, when working in any form or set of expectations the craft is to consider the quality of the materials you’re working with - in this case writing for interaction. Like working with or against the grain of a piece of wood, or the qualities of stoneware versus porcelain, how you work it produces different results - but neither is wrong. What’s important is to understand the implications of the decisions you make.

When asked this question about ‘choice’ with regards to Mutazione, I have taken to describing the decisions I made as the game having ‘multiple middles’ rather than ‘multiple endings.’

In individual conversations I very much use the Kentucky Route Zero model of choice – colouring how the character plays the situation, but not letting you choose who the character is. Are you attempt-to-be-articulate Kai? Or are you diffuse-the-situation-with-a-joke Kai? Either way, you’re still Kai. The conversations branch; you might access different reactions, memories and stories; but they come to the same place at the end.

The player agency is instead to be found in exploration.

Why did I come to this conclusion? Well, as writer and narrative designer coming to the project of Mutazione - though we’re mostly talking about narrative design decisions here - the brief that I started with was that it was:

The decisions I therefore made about player choice were driven by these considerations, which could be translated as needing:

For this reason it made a lot of sense not to give the player significant means to affect outcomes - multiple endings. That is: not to allow player agency to exert upon the outcome linearly - multiple-ending style - but rather to invite them to shape their experience of the story laterally - sideways: multiple middles.

The player choice in Mutazione is exploration rather than conversation-focussed. This meant a great deal of careful planning, to make sure that the mandatory moments in each time of day encouraged the player to discover B and C plots, in how they were spaced out, and in what they hinted at. It also meant thinking carefully about each characters’ journey through the game’s timeline, and how different levels of exploration would challenge the pacing. It meant adding certain times of day where the player had fewer options open to them - for either urgency, or to chime with natural rhythms, like morning or late at night. This is very common in ensemble cast TV shows, and if you’d like to hear more about that see my other GDC talk Kill the Hero Save the (Narrative) World.

The A plot is the driving theme or problem of the episode. In Day 5 of Mutazione, that’s 'go on a boat trip with Tung and Miu, discovering you should grow a garden to help him with his boat making.'

‘B’ plots are the ‘secondary’ story in an episode, often lighter, comedic, or contrasting thematically in a way that reflects on the A plot – all of which makes the A plot more compelling when you return to it. In Day 5 in Mutazione B plots include following up on the events of the night before, when it was revealed that Spike the bartender has had a long-running crush on Tung’s mother, Claire.

‘C’ plots are the smallest unit, and might resemble ‘empty’ side quests, but the difference in an ensemble setting is that you care about the characters because of previous investment in them. Which means that these details can be dealt with lightly, and be used to add to your satisfaction with the completeness of the universe. In Day 5 of Mutazione, a C plot would include the Sausage folk plotting a new scheme which this time will definitely make them all rich.

The only mandatory path is the A plot. The multiple middles are the choices you make in each time of day to dig into the B and C plots. Because when the time of day moves on you won’t be able to access those conversations again. 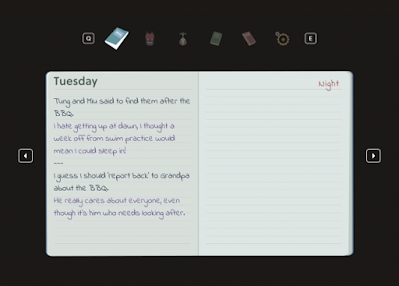 I co-developed narrative design details such as the journal - a diegetic means of setting out which conversations or actions were the mandatory A plot conversations for the time of day, and the last of those - the conversation which would move time forwards - was always marked by a timer symbol, so the player could choose if they were done exploring in that time of day. I also gave the many characters habits and routines, constructing plots which progressed whether or not you had found the first or second conversation. This gave a sense of a pre-existing and alive story-world in which you weren’t the only protagonist.

The slice-of-life aspect of the soap opera genre was served by therefore being able to interweave many plot lines, and to allow the player to discover histories and participate in different dramas, past and present. In working with an ensemble cast I was able to vary tone widely - humour and tragedy could exist fairly naturally side by side, as well as huge events and minutiae - contributing to the picture of drama-driven domestic life which is characteristic of the soap opera genre.

And that ‘soap opera’ setting of personal dramas and everyday routines and the choice I made to draw characters who were very naturalistic contrasted usefully with the fantasy setting - it gave a weight to the mutant world that otherwise could have come across as glib. The multiple middles also allowed me to build characterisation which was rich and complex, meaning that the full ensemble cast felt real and a part of the texture of the place. I worked carefully in the dialogue to imbue each character with a distinct voice – from cadence, idioms, style and manner of speech.

Finally, in being transparent about time, and combining this with the freedom to explore Nils’ wonderful wilderness and environments, the narrative design was able to reflect the theme of a closeness to nature, and the main piece of mechanical gameplay - the magical musical gardens so beautiful composed (musically and programmatically respectively) by Alessandro Coronas and Douglas Wilson.

I made narrative design decisions that focussed on the characters as complex, rich, and a little different for the smallness of their community. I wanted getting to know them to feel like coming across a number of new plants you’d never seen before, watching them grow, tending to them where possible, and allowing them to surprise you.

I set out to build narrative design that would allow the player to choose their own pace: to push at the central plot, or to meander, wander, and grow at their story at their own pace. The themes of the story are tough – among the everyday it deals in trauma, colonialism, infidelity, ageing and illness – but the game is often characterised as ‘gentle,’ I think, because of the ‘multiple middles’ opportunity to pace your own experience.

So, when I talk about Multiple Middles, what I mean is exploration-focussed, lateral narrative design which opens up a community of characters, rather than linear choice-and-consequence style storytelling, focussed only on the hero and how the weight of their agency affects the world.

What can you learn?

To take more general principles from this talk, I’d like to advocate for the consideration of player agency as a quality, not a virtue, of writing for games. Restricting agency can often help you tell your story more effectively, intuitively, and in a manner which allows you to explore tougher and more complicated themes sensitively. Multiple Middles style design allows for player agency through exploration, rather than changing outcomes.

One of the most meaningful dialogue options I offer players in Mutazione is often ‘Stay Quiet.’ When someone is talking to you of their grief, or sorrow, or regrets, sometimes the most powerful act is to not to act, but to listen. We can build narrative design that supports the telling of that - and Multiple Middles is how I, personally, attempted it.

I'd also like to finish this post with the fact that some of the best writing on interactive storytelling structure is definitely from Emily Short. It's likely my 'Multiple Middles' is also described on her blog somewhere with a much more concise description. I am not inventing anything here except the name that I call this conscious narrative design choice.

I would strongly recommend checking out the plot and narrative structure tag on her website, and I'd also highlight three particular posts as good narrative design starting points: 'Small-Scale Structures in CYOA,' 'Storylets: You Want Them,' and  'Beyond Branching: Quality-Based, Salience-Based, and Waypoint Narrative Structures.' 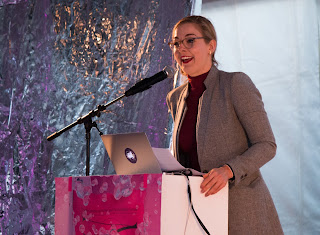 Hannah Nicklin, photo by Julia Dasgupta
Hannah Nicklin is an award-winning British narrative & game designer, writer, and academic (among other things) who has been practising for nearly 15 years. She works hard to create playful experiences that see people, and make people feel seen, and also argues for making games a more radical space through mentoring, advocacy, and redefining process / premises. Trained as a playwright, Hannah moved into interactive practices early on in her career and is now the CEO and Studio Lead at Danish indie studio Die Gute Fabrik and most recently launched Mutazione in 2019. She has a PhD from Loughborough University in games-influenced theatre / theatre-influenced games. She is on Twitter @hannahnicklin
Posted by Creative Writing at Leicester at 10:02