Alexandros Plasatis, "Made by Sea and Wood, in Darkness" 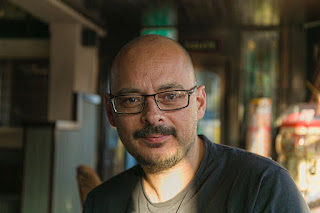 Alexandros Plasatis is an immigrant who writes fiction in English, his second language. He lives in the UK and works with the displaced and the homeless. Made by Sea and Wood, in Darkness is his first book. His website is here. 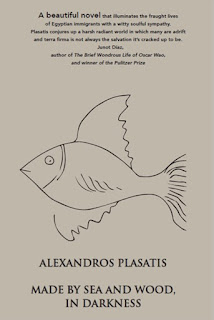 About Made by Sea and Wood, in Darkness

Made by Sea and Wood, in Darkness takes place in and around a 24/7 harbourside café in a Greek town. It tells the story of the Egyptian immigrants who work as fishermen on the trawlers and other outcasts who hang around the café and the harbour. Each chapter is a stand-alone short story and each story is a step further into the darkness and light of a novel where the Egyptian fishermen, the beggars, the café’s servers, the prostitutes and the downtrodden homosexuals become the grotty heroes of the everyday.

Stories from this book have been nominated for the Pushcart Prize and Best of The Net, and over the years all the stories were published in US, UK, Indian and Canadian magazines and anthologies.

The book is based on participant observation. That is, for years I was a parasite lurking around the harbour at night, wanting to be with those who were unwanted, working at a harbour café. What I saw and felt I turned into this book. And whether their world is filled with wholesome pride and magic or is nothing but an itchy little scab, that’s for you to decide.

You can find more information about the book on the publisher's website here.

From Made by Sea and Wood, in Darkness

She knew them from Café Papaya, the harbour-side café where all the Egyptian immigrants who worked on the caïques liked to spend their mornings, smoking and drinking the coffee Angie made for them, now and then telling her stories in their heavy accents: they were simple stories about the sea and the fish, told slowly, in a few, tired words, and even on the rare occasion they spoke of the Aegean’s black squalls and night-fogs, their eyes remained passive. But in the evenings, those who stayed ashore liked to smoke hashish and go to the café to drink beer and ouzo, and their tales were confusing, dreamlike. Then Angie would see their eyes glisten strangely and she would listen, and listen again as they told her of their fishing village that stands where the Nile becomes the sea, a village with a thousand wooden caïques, marked with symbols and painted with large female eyes with long eyelashes or the eyes of eagles. With beer and hashish inside them, their ramblings rattled of the caïques of Ezbit El Burg, so many that even the great river that used to be a God wasn’t wide enough for them. And as night fell on the harbour of Kavala, their money spent, their beer bottles empty on the table, the drunk ones had nothing but threads of memories to hang on to, and they would call out the name of Allah and their hard faces would soften with sweet hope: then the waitress knew that the time had come for them to murmur their caïque-dreams and remember old sea-voyages to Falasteen, and down and beyond the Red Sea, when they first saw the shores of Sudan and Habasha, of Yaman, of Djibouti and Alsomal. The young girl listened to their stories with large, impressionable eyes, she listened and learnt. And it was in one of those waitressing nights that Angie had asked if she could join them on a voyage, to live one of their stories.

Posted by Creative Writing at Leicester at 01:36