Tina Otito Tamsho-Thomas, "Someone Is Missing Me" 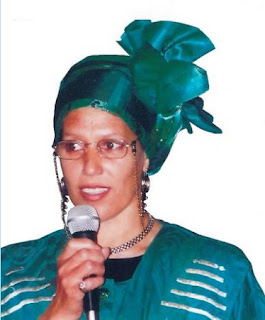 Tina Otito Tamsho-Thomas is a published writer, poet, spoken word artist, writer-in residence, playwright, Black Writing Development pioneer and Human Rights Advocate. Her unique, forthcoming memoir Haunted By The Truth explores identity, adolescence and belonging. Her poem ‘Like Never Before’ was runner up in the Black Artists On The Move, Virtually Living, International Poetry competition 2020. Her work can be found in several anthologies including Red: Contemporary Black British Poetry, Sexual Attraction Revealed and Brown Eyes. Her poetry collection is Someone Is Missing Me, published by Fly on the Wall Press. 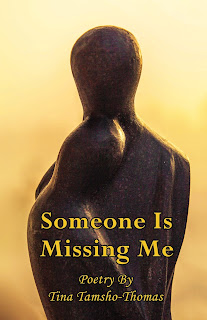 About Someone Is Missing Me

Akulah Agbami, Artistic Director of Sheba Soul Ensemble, writes: “In this highly readable, sorely needed collection, Tina Tamsho-Thomas tackles subjects close to many people’s hearts. There are personal poems and political poems; poems designed to make you grin and others to evoke remembrance of horrors past. Some poems catapult us to the heart of Jamaica, or stir us in our front rooms: as we sip our tea, we are encouraged to expect ‘cake, not crumbs.’ Others teach us how we can mend a broken heart. Some poems deal with emotional, complex questions, such as excluded, absent fathers and the continuing colonialist onslaught on Africa. Someone Is Missing Me celebrates the enduring spiritual relationship between Tina and her excluded, Nigerian father. This collection is guaranteed to empower Black women who seek out her wisdom and is an exhortation to re-position ourselves, to assume our rightful stature.”

You can read two poems from the collection below.

From Someone Is Missing Me

Dancin in Sepia Dreams
Standing in the shadows
his silhouette calls. I run to him;
he is not there. I call his name;
his name echoes on the wind.

It’s warm and sunny, I feel safe,
we embrace, his shadow
my shadow. I hold him.

He takes my image from
his inside pocket, a sepia
negative, I am ten months old.

He has never seen me but
knows I am his daughter.
I have his hands, cheekbones,
I am tall, proud, head held high.
The sand is sepia, it is
warm and sunny, we
dance together,
my shadow his shadow.

So you think I’m a mixture
and my being is a plight,
but aren’t we all a bit mixed up?
So there you are – you’re right.
My mother’s European
Irish, English, French blood too,
her father was an army man,
a soldier through and through.

First, he fought in Africa,
robbed her minerals and gold,
ensured the Empire’s dominance
through Colonialism’s hold.

Then he served in India
for his country and his king,
looted her rich culture,
man, he didn’t leave a thing.

With India divided,
her warm blood upon his hands,
he then oppressed the Irish,
supported Black and Tans.

Next, he fought the Germans,
thirty-nine to forty-five,
to rid the world of fascists.
just to keep his race alive.
He hated every foreigner
who came into his sight,
kicked the Arab and the coloured
to prove might was white.

My devout Catholic Granny
was born on Irish soil,
the church instilled the fear of God,
to keep its women loyal.

At eight she was a worker
in an English corner shop.
with no formal education,
she was worked till she dropped.

When granddad came to court her
she succumbed to all his lies,
marriage to an army sergeant
meant strict, regimental ties.

Life was hard for grandma Maggie,
thirteen children born in all,
granddad wasn’t just a racist
as my mother recalled.

Mad Sam - his army nickname,
was also sexist through and through,
when home from kicking foreigners,
kicked his Maggie black and blue.

Of all their growing offspring,
most of them survived,
kept his prejudicial bigotry
kicking and alive.

They were narrow-minded hypocrites,
who shared the values of the church,
pious at the altar, in the
foremost pews they’d perch.

The youngest of the family,
a shy girl meek and mild,
grew into the woman who
would mother this Black child.

The church condemned her as a whore
for loving a Black man, the family
screamed their rage profane,
imposed a racist ban.

So I never met my father,
who knows who to blame,
denied his baby daughter,
on me he had no claim,

So, I’m certainly a mixture
from Europe’s melting pot of hate,
a product of a system
that produced this racist state.

But one thing is for certain,
I’m not a mixed-up soul,
conceived in love, both parents
made me absolutely
Whole.

Posted by Creative Writing at Leicester at 02:18