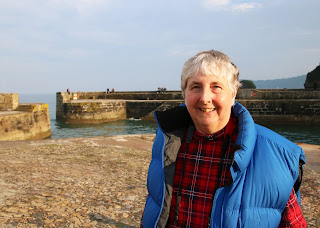 Caroline Gill lives in Suffolk with her archaeologist husband, David. Her first full poetry collection, Driftwood by Starlight, was published by The Seventh Quarry Press in 2021. Caroline graduated in Classical Studies from Newcastle University in 1982, and gained a PGCE from the University of Exeter, followed by a TEFL Certificate from the Bell School of Languages in Norwich. She has worked as a teacher, an EFL tutor, and a Cataloguing Assistant in the Churchill Archives Centre in Cambridge.

The Holy Place, a ‘Poet to Poet’ chapbook shared with Monterey-based poet, John Dotson, was published by The Seventh Quarry Press (Swansea) in conjunction with Cross-Cultural Communications (New York). The Holy Place was launched in 2012 at the Dylan Thomas Birthplace in Swansea. ‘The Figure at the Phoenix Mine,’ a sestina, was awarded First Prize in the General Section of the International Petra Kenney Poetry Competition (2007). ‘Raft Race’ took Overall First Prize in the ZSL ‘Conservation’ Poetry Competition (2014). ‘Penwith Fingerstone’ was awarded Third Prize in the Milestones Competition (2017), judged by Brian Patten. Three poems were included in The Book of Forms: A Handbook of Poetics Including Odd and Invented Forms by Lewis Putnam Turco (4th edition, University Press of New England, 2012).

Caroline has read her poems at the Hay Festival, the First International Poetry Festival in Swansea, Poetry in Aldeburgh and Winchester Poetry Festival. She has taken part in several short writing courses, including one run jointly in 2014 by the Poetry School and the Polar Museum (SPRI, University of Cambridge). Another, The Write Stuff, was organised by Disability Arts Cymru. Caroline’s outlook is shaped by her Christian faith. She loves to watch puffins, and many of her poems reflect her concern for the planet. 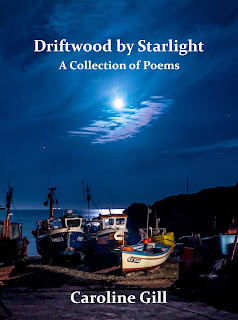 About Driftwood by Starlight

Driftwood by Starlight by Caroline Gill was published by Peter Thabit Jones of The Seventh Quarry Press in June 2021. While many of the poems have a coastal theme, some concern wildlife, landscape and archaeology. The majority have settings in England, Scotland and Wales. The author has a life-long love of Cornwall; the cover photograph, showing Cadgwith Cove under moon and stars, was taken by Laurence Hartwell.

From Driftwood by Starlight, by Caroline Gill

Zennor Quoit, Robin’s Rocks, Great Zawn
and Gurnard’s Head ripple off the tongue,
raining their music on this granite land.

I tilt my neck and watch the sky display
its spectral colours as the clouds recede;
two farm dogs scamper up the hill. I walk

towards the fingerstone, which hides
between the tarmac and a Cornish hedge;
a snail trail shimmers in the afternoon.

I check the surface of the milestone block.
A hand points to Penzance: it’s ‘6M’ up
and over to the arc around Mount’s Bay.

This ‘stone with benchmark’ sends me on
to find a town called ‘ƧTIVƧ’, without an ‘e’
in Ives. Each ‘S’ is back to front: was this

through lack of learning? It could be
the maker was left-handed for when I
was small and shaping letters into words,

my text ran right to left, which seemed
its natural ebb and flow. I filled the pages
of my stapled book, flicking from the end,

until convention’s channels turned the tide.
My current ‘S’ advances in a coil of surf,
unlike these stone-based characters,

The peat fire crackles and burns with stories;
footsteps scurry through mist and mountain
to warm a Hebridean hearth with stories.

A figure crosses turf where St Columba
knelt long ago beside the Snizort;
the crofter’s creel is laden with stories.

He pauses to watch the snow-stars drifting
on the loch, with its kelp and pebbles;
hares in the lazy-bed leap with stories.

The crofter enters his neighbour’s parlour,
rests on the settle while divots smoulder;
a plaintive skirl fills the room with stories.

Shadows dance round the doleful piper,
whose music makes the embers tremble;
the single oil lamp flickers with stories.

A mother stirs her three-legged cauldron;
sisters spin, or weave at the handloom,
infusing a homemade plaid with stories.

Posted by Creative Writing at Leicester at 05:50