Rob Gee, "The Day My Head Exploded: Poems About Healthcare" 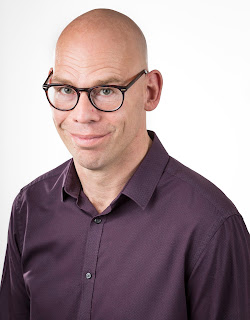 Rob Gee qualified as a psychiatric nurse in 1994 and worked for twelve years in mental health units around the UK and Australia before becoming a stand-up poet. He’s performed at a hundred fringe festivals across the world and won numerous poetry slams, including the Edinburgh Slam, the Arts Council’s Lit Up Slam, BBC Two’s Why Poetry Matters Slam and the Orlando Poetry Smackdown. He’s received over twenty awards for his solo shows. Rob is patron of Leicestershire Action for Mental Health Project (LAMP) and lead artist for the Comedy Asylum: comedy shows written and performed by people receiving mental health treatment. He returned to nursing during the COVID-19 pandemic. His website is here. 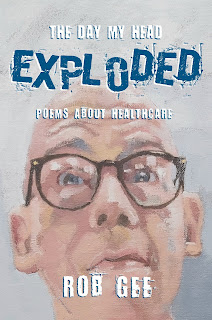 About The Day My Head Exploded

The poems in this collection are drawn from my experiences as a nurse, inpatient and writer in healthcare settings.

In the 1950s my great-aunt Ada and her sister Freda both immigrated to the UK from Ireland and commenced careers as mental health nurses. I didn’t start my training until 1991, by which time they had both retired. I’ll never forget the combination of mirth and pity in their eyes when I told them I was going into the profession.

By the early 1990s, the institutions built in the Victorian era were starting to close. Long-stay patients were being moved out into 'the community,' while people with immediate mental health concerns were now treated in acute units. Nursing also started to become more academic in its efforts to be taken seriously as a profession. Whenever I discussed the job with my aunts it was apparent how much our role had changed. It's changed again since.

Several poems here represent a snapshot of adult mental health nursing at the turn of the millennium. Since then, wards have become smaller and single-gender, smoking has been banned and uniforms have returned. The last of these would have pleased my aunts immensely, whereas I hardly ever wore a uniform in my career.

Some poems here are from my days as a student nurse. Others are from a more critical perspective and they were written later, by an older me. Several are from my time working as a writer in healthcare settings and there are a couple from the COVID-19 crisis, when I returned to nursing. There’s also the title piece, loosely based on my experience of being hospitalised with meningitis ...

Below, you can read four poems from the collection.

From The Day My Head Exploded

A hug can make you feel at home.
It can soothe a broken soul
and help you feel less alone.
A hug can let the warmth in
when you’re chilly or reclusive.
Hugs are often better than drugs,
but they’re not mutually exclusive.

Dr Brice
Dr Brice put her name in the wrong part of the form
and inadvertently sectioned herself.
This amused us greatly,
because she was bad for people’s mental health.
She went on a trip to Venice,
paid for by the drug company
who were keen to invest in her impartiality.

She changed everyone’s meds when she came back.
Carnage ensued and people relapsed.
One man’s mental health went so badly to shit
that he smashed up the ward
and put two nurses off sick.

So don’t be like Dr Brice.
Just stick to the guidelines from NICE.

Whisky in Your Tea

Breakfast isn’t what it used to be.
We used to start the day with a pork pie
and a drop of whisky in our tea.
It would give your soul a glow
and set you up for the day.
Now it’s just a bowl of cornflakes,
‘cause they took the whisky away.

If you are in your sixties or seventies,
they give you a stainless steel hip,
which is guaranteed for thirty years.
If you’re in your eighties or above,
you get a plastic hip,
guaranteed for ten years.
Rubber ants clad in green
crawl in and out of the gap.
She’s oblivious to their labours
as she lies on her back,
exhausted, after two long years
crawling up from the bottom of a waiting list,
and, looking at her gaping leg,
my own begins to twitch.
I spoke with her yesterday.
She said it sounded ridiculous,
but she was fond of the old hip
that chased the wind with her
on drunken nights of youth
and had danced in endless circles
around lusty amber halls,
blissfully caressing the hips of others.
Now it cripples her with pain
in its knackered demise;
they’re going to replace it
with a virgin piece of plastic.
Human carpentry replaces the parts
that Mother Nature cannot reach,
but two years is a long time
to spend hobbling on your memories.

Posted by Creative Writing at Leicester at 01:09