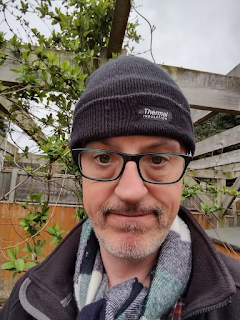 David Wharton comes from the North East and lives in Leicester. His novel Finer Things was published by Sandstone Press in 2019. He has a PhD in Creative Writing from the University of Leicester, where he is a lecturer in Education Studies. He also teaches Creative Writing for Leicester Vaughan College. Previously, he was an English, Media, and Film Studies teacher. As well as his own fiction and poetry, he has also published books on Film Theory and Media Education. He is currently finishing his second novel. You can find him on Twitter @wharton1965 and his website is here. 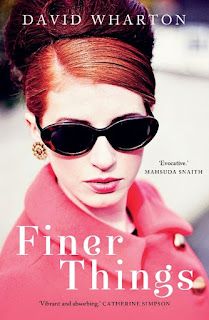 In 1963, a year of sometimes dizzying social and cultural change, the sixties are just about to start swinging. Yorkshire girl Tess is disappointed and isolated at her elite London art school. Her only real friend is Jimmy, a gifted fellow student whose working-class background, homosexuality and uneven mental health make him more of an outsider than she is. One night at a Soho jazz club, they meet Delia, a professional shoplifter from the East End, desperate to disentangle herself from her complicated, dangerous lifestyle. As these three characters are drawn into each other’s worlds, they must all face up to reality, to who they really are, and how they might find unexpected hope in the future.

She took Maureen into the Food Halls first. There they strolled past slabs of cured beef; bright tubes of French biscuits; a stack of triangular tinned hams with windmills on their green and red labels – an intoxicating wash of colours and smells. All the other departments had wheeled out the summer stock: swimsuits, thin cotton dresses, lightweight bedding in sharp new season shades. Here it was Christmas all year round: spiced, hedonistic, excessive.

Delia was sometimes tempted to slip a thing or two from the Food Halls into her bloomers. But there was no point, not when Tommy the Spade could nick the same stuff from any grocer and sell it for pennies. The valuable items – exotic meats, saffron, caviar, truffles – Barkers kept behind the counters, where fussy men in white jackets could dole them out by the quarter ounce. Too much trouble to thieve those in saleable quantities, and anyway, Delia knew the interests of her clientele. Nice clothes you could flog easily but who’d buy shoplifted caviar? As for truffles, she had tried those once, mixed with butter on a cracker, at a party in Knightsbridge. She’d nearly thrown her guts up. For three days afterwards she hadn’t been able to rid herself of the taste of decay.

She picked up an onion, held it to her nose, dislodged some outer skin with her thumbnail, and let a crisp, papery fragment drift to the floor. Returning the vegetable to its display she told Maureen under her breath, ‘We won’t be nicking anything right now. First you’ve to learn how to look out for shopwalkers.’

‘I ain’t never been anywhere like this before,’ Maureen said. ‘Spensive, ain’t it?’

‘Overpriced for idiots. The sort who’ll cough up double for digestive biscuits so they can take them home in a paper bag with Barkers of Kensington on it. Did you hear what I said about shopwalkers?’

Maureen nodded. ‘I got to learn how to look out for them.’

‘Good. Over there, by the fresh herbs,’ Delia murmured. ‘Blue coat. Just take a quick look. Tell me what you think.’

Maureen glanced at the woman clumsily, but briefly enough.

‘Don’t think so. But what do you notice about her? Why doesn’t she fit in here?’

The apprentice gave the blue-coated woman another awkward look. ‘Clothes?’

‘Well done. What’s wrong with them?’

Delia herself was dressed in items lifted from the best clothing departments in the city, and, because Stella had prepared her for the day’s work, so was Maureen. Nothing flashy, but all high quality. Unlike the shoplifters they pursued, shopwalkers had to buy their own clothes, and they weren't paid well. They prowled about the stores in dumpy crap from Marks and Spencer, giving the alarm to any hoister who knew her business. But this woman’s tat came from British Home Stores, or somewhere worse. She was a shoplifter. Some amateur.

Posted by Creative Writing at Leicester at 01:50