Gaynor Jones, "Among These Animals" 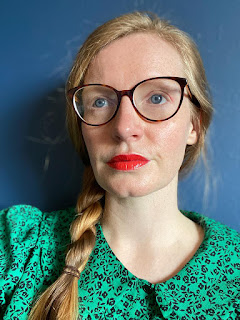 Gaynor Jones is a writer based in Oldham. She is the recipient of a 2020 Northern Writer’s Award for her short story collection in progress, Girls Who Get Taken & Other Stories. She has won or been placed in writing competitions including the Bridport Prize for flash fiction, the Mairtín Crawford Short Story Award and the Bath Flash Fiction Award. She has performed her work at spoken word nights in the North West and at the 2019 Edinburgh Fringe with For Book’s Sake. Her website is here. 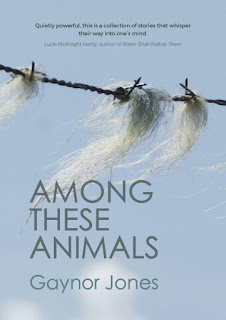 About Among These Animals

Among These Animals is a novella-in-flash that traces the lives of farmer Derfel and his daughter Carys from the 1950s onwards in North Wales. An experimental take on a traditional historical saga, the hybrid form of the book reflects the themes within: this is a story about how family can break us, but can also put us back together again.

You can see more details about Among These Animals on the publisher's website here. Below, you can read a sample from it.

From Among These Animals

The letters are carved like a secret. The base of the thick tree trunk at the entrance to the farm now bears her name forever. It will stretch and grow with the tree, the letters reaching skyward, growing as the boy who carved it grows, until the leaves reach the clouds and she is nothing but a memory.

Owain had tried to climb the tree but Carys shooed him away. She can hear him bashing stones together at the top of the drive. She wants to be alone to feel the carving under her fingers, to imagine the hand behind it.

Carys does not know which farmhand it was; it could be any of them. She has heard them whispering about her as she passes in the yard in her summer shorts. She could stop and join in with them, could watch their cheeks turn crimson as she leans over to roll a marble or toss a jack, but she is not interested in such games. Instead she roams the fields after school, shirking her work, beheading dandelions that have no right to be growing there anyway, looking for the young man with the dark eyes and the scarred arm. Lately he lingers when he drops off the keys after his work, taking warm cups of tea or slices of honeyed toast, whatever her mother offers.

Carys is leaning down in the late autumn sun, tracing the letters of her own name, when she feels the body behind her. A hand moves onto hers, the sleeves rolled up above it just enough to show the criss-cross pattern of wire in flesh. The hand flattens out her own until it covers the carved letters, and a voice whispers her own name into her ear. She feels a peck-peck-pecking low down in her groin as though there is an egg in there, something trying to get out. When he turns her around and presses his mouth onto hers, the egg bursts open, and it isn’t a bird in there, but the white, and the yolk, viscous and warm, flooding her body.

Her eyes are closed. She is gone. She doesn’t hear Owain drop his stones. She doesn’t see him run towards the fields. She doesn’t feel the rain, thick and heavy, falling onto her skin.

Carys arrives home to her mother cracking eggs into a pan for the morning batter. The shells pile up, jagged edges slotting into each other imperfectly. The twins are in their pyjamas, tearing at pages in a comic book. Carys grabs a towel and rubs at her hair. Her father looks up at her and then up at the clock, and then back at her. Carys drops the towel and keeps her hands at her side, refusing to flatten down her skirt or check her arms for tiny scratches from the tree.

She looks back over her shoulder at her father at the kitchen table, rolling an egg in his hand. He is moving it gently, as if he knows how easily it might be broken.

Posted by Creative Writing at Leicester at 02:00