Astro-Poetry Competition 2021: The Results and the Poems

As part of the second-year module, Using Stories, we explore some of the ways in which Creative Writing might draw on and explore scientific material. This includes, for example, looking at some of the amazing discoveries by NASA's Chandra X-Ray Observatory and using them as starting points for new poems.

Arising from this, we ran a competition in early 2021, open to all Creative Writing students at the University of Leicester, in which they were asked to submit poems inspired, in some way, by Chandra's findings. You can see the original call for submissions and description of the competition here.

The entries we received were all, in their different ways, wonderful explorations of the fascinating interconnections between Creative Writing and science. It was naturally very hard to select winners and runners-up; but we chose two winners and two 'honourable mentions.' Congratulations to all four writers, and thank you to everyone who submitted poems for the competition.

Here are the results:

There were two joint winning poems: ‘IC 4593’ by Laura Sygrove, and ‘A New Cosmic Triad of Sound’ by Rebecca Hughes. You can read these poems on NASA Chandra X-Ray's website here.

There were two 'Honourable Mentions': 'A Matter of Life Span' by Lena Elin Jetses, and 'Infant Star' by Isaac Plant. You can read these poems below.

Lena Elin Jetses is a twenty-year-old English student at the University of Leipzig in Germany, on an exchange at the University of Leicester. She enjoys writing fantasy novels and short stories, preferably at 4am and fuelled by alternative rock music, tea and chocolate. She writes: 'For this poem, the idea was to capture the enthusiasm of scientists trying to understand as much about space as possible. What struck me about the original article ('Oldest Known Objects Are Surprisingly Immature') was the fascination with the fact that age does not equal evolutionary stage for globular clusters. It puts being human beings' lifetime into perspective, and that is what I tried to convey.' 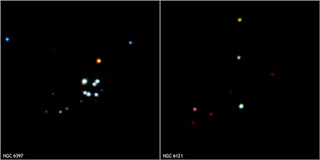 A Matter of Life Span

All grown-up and ready to explore,
humanity jumps straight out of college
into space, the final frontier.
Right outside our earthly door
we hope to find ancient knowledge
in globular clusters far and near.
Those clusters serve as laboratories
where we study on and on
about stars a million times our ages.
As we count x-ray binaries,
we hearken to expert Fregeau, John,
who names the evolutionary stages.

Meanwhile in the Milky Way
those giants waste billions of years away.
Their celestial nurseries
can be found in all galaxies.
We strive to find answers, we strive to be sure;
yet in 9 billion years they never mature.

Isaac Plant is a second-year English student from the north east. He writes: 'The article I read on the formation of protostars ('X-Rays from a Newborn Star Hint at our Sun's Earliest Days') didn't just provide interesting language as part of a found poetry task we did in class, but also contained an interesting analogy for growth. I found the image of this inward collapse and possible destruction being a necessary part of the star's evolution an interesting parallel to concepts of personal growth in which one must risk destroying parts of one's old self to become something new.'

Posted by Creative Writing at Leicester at 12:31