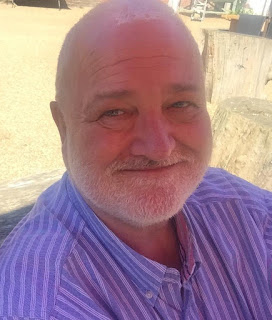 Jonathan Wilkins is 65. He has a gorgeous wife Annie and two beautiful sons; he loves to write. He is a retired teacher, lapsed Waterstones’ bookseller and former Basketball Coach. He taught for twenty years and coached women’s basketball for over thirty years before taking up writing seriously. These days, he regularly teaches Creative Writing workshops in and around Leicester and takes notes for students with Special Needs at Leicester University.

He has always loved books and reading, but nine years at Waterstone’s nearly put paid to that! He has had a work commissioned by the UK Arts Council and had several pieces published traditionally as well as on-line. He's had some of his work placed in magazines and anthologies and also exhibited in art galleries, studios, museums and at Huddersfield Railway Station Waiting Room. He has writing on various blogs. He loves writing poetry. He enjoys presenting papers at Crime Fiction conferences - it keeps his mind active through the research process and is a great way to meet new people and gain fresh ideas for writing.

For his recent MA, he wrote a crime novel, Utrecht Snow. It is part of a series of murder mysteries he has planned based in the Dutch city. He followed it up with Utrecht Rain and self-published both. Poppy flowers at the Front is the first of a crime series starting at the end of the Great War and meandering into the early Twenties. Poppy Blooms at Nemesis Hall  is the second part, Poppy Knows Best the third.

Jonathan is undertaking a Creative Writing PhD at Aberystwyth University where he will be writing about his Poppy novels and Golden Age Crime Fiction. 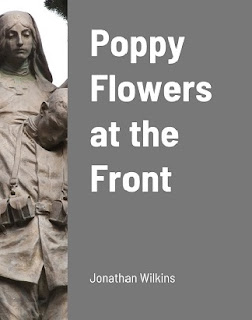 About Poppy Flowers at the Front

With her father, Lord Loveday in the British secret service, and her brother Alfie in the trenches, is it any wonder that Lady Pandora Ophelia Loveday, Poppy to her friends, decided to volunteer to drive ambulances in France? We follow her adventures in France as she races to get wounded men to the Casualty Clearing Station and then the Base Hospital as safely as possible.

She finds Élodie Proux, a French nurse, at a roadside clutching the body of a soldier and takes her back to her base. Élodie becomes her dearest girl as they fall in love.

Poppy and Élodie meet a series of frightening adversaries during the closing weeks of World War 1: saboteurs at the Front, spies in Paris, a psychotic arsonist at home in Wales, all culminating in a frantic quest to save … No … I think you had better read the book ...

You can read a review of Poppy Flowers at the Front on Everybody's Reviewing here. Below, you can read an extract from the novel.

From Poppy Flowers at the Front

… it was the screaming that really got to me. I could put up with most things and to be honest I had done so these past few months. The sound of the bombs didn’t really faze me, nor the constantly falling rain and cloying mud. The fleas I found in my hair or clothes were just a nuisance as long as you caught them early. What I did hate was the screaming. It made my blood run cold, the screaming of men in agony, men who had lost their sight or had lost a limb. It ripped my heart out. Young boys in pain, a pain they did not deserve. Boys who screamed in terror, far from their homes and their mothers. Boys who screamed at things that weren’t there, at memories of falling friends. Boys who screamed when they should be at home having fun. The number of times I had lied to a dying boy with the words ‘mam’s here now, son’ were countless. I lied to help them, to reassure them, to remind them of their mother’s love, the love they would never feel again as they died in this foreign field. I often wanted a hug from my mother, I knew what they were missing. Writing this down seems so easy. Doing it all is rather more difficult. Like I am in two worlds. A world of the reality and nasty business of war and then this calmness that seems to envelop me when I write. So, rain and wind, snow, and ice, all this I can put up with. Incessant screaming, though, is another thing all together. It is unseen. They are behind me in the ambulance. Unless I have to load it up when we are an orderly short, all I do is hear them. Then when I park up at the Clearing Station or at the ambulance train I have the honour of seeing them. Mangled bodies, missing limbs, gas burns, trench foot, gangrene … all the pleasures of this so called modern war. All the pleasures plus the screaming that never seems to end.

Posted by Creative Writing at Leicester at 01:59