Frances Evelyn, "The Traitor Within" 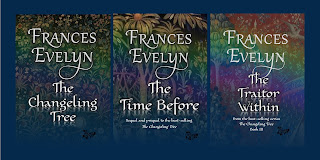 Frances Evelyn writes real-world fantasy set in Leicestershire and Rutland. The third instalment in the bestselling The Changeling Tree series, The Traitor Within, is due for release on the 31st of October.

Readers have described The Changeling Tree series as ‘intriguing,’ ‘mesmerising,’ ‘amusing,’ ‘scary,’ ‘wonderful’ and ‘sublime’: ‘high fantasy meeting Jane Austen.’ The first three books (of five) are available in paperback, as e-books, and free via KindleUnlimited. More details about her books, freebies and competitions are available on her website and via social media.

Frances was born in Coventry and studied English in Manchester and London. She worked in higher education before becoming a full-time author. She’s an experienced editor and proof-reader, and offers proof-reading services to other indie authors in exchange for their support in promoting her books.

Frances Evelyn is a pen name.

About The Changeling Tree Series

Rose Watts travels in time. Her mum and gran do too. So why didn’t they warn her? And why did they lose touch?

In The Changeling Tree, Mike’s girlfriend, Tracy, has been missing for months without a word. He’s sure her mum knows more than she’s telling, but he can’t live in limbo forever. He’ll make one last attempt before trying to move on.

It’s the night of the winter solstice. Tracy’s house is dark and deserted, but there’s a pram in the garden, and inside the pram is a baby.

To protect her throne, Queen Annis (remembered as Black Annis in Leicester legend) must bring human misery to the court as an antidote to the tedium of endless joy. Neither she nor her challenger have any sympathy for the humans caught up in their game: Tracy, her daughter, Rose, and Rose’s gran, Peggy.

In The Time Before, Rose moves in with her gran, following Tracy’s death. Determined to travel back in time and save her mum, she finds herself instead in 1941, where she’s evacuated to the coast with Peggy. They discover an impossible door that doesn’t lead outside, and when they go through it, they’re torn apart.

The third book in the series, The Traitor Within, sees Peggy re-appearing a year after she left, when everyone has given her up for dead. Her mother’s delighted of course, but it would have been easier for everyone else if she’d never come back.

Meanwhile, Rose is in the eighteenth century and far from home. She needs to get back to Leicester and find her mum, but highwaymen aren’t the only dangers on the roads.

Below, you can read an extract from The Traitor Within. 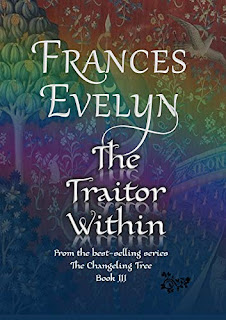 Fom The Traitor Within

... Rose has been walking all day and takes shelter for the night among some trees near the road. Her thoughts are interrupted by a conversation nearby:

The first voice was male: not quite a boy, but not yet a man.

Leaves rustled and twigs snapped as they moved away.

“Your face, you fool,” hissed the man. “Cover yourself.”

Hooves pounded the road and wheels rattled over stones and ruts. As they came level with Rose’s hiding place, she heard horses whinnying and a man cursing. The carriage stopped a little way past her.

“Hold the bridle,” hissed the man and then, in a louder voice, “You sir. If you’d be so kind as to climb down.”

With grumbles, wheezes and creaks, a heavy man came down from the driver’s seat.

“On the floor, there’s a good chap,” said the highwayman.

Rose craned her neck to peer through the undergrowth. The coachman lowered himself to the ground, groaning as he knelt then lay, face down. The highwayman, with a scarf over his nose and mouth, was holding a pistol loosely between his fingertips. Rose knew what to do in these situations. Run. If you can’t run, hide. If it’s safe to do so, call for help.

She was out of sight already, so the safest thing was to stay where she was, except they weren’t far away, and they’d easily see her if they looked closely. She might need to run if it came to it, so slowly, carefully, she untangled her legs from the cloak, rustling dry leaves with every movement.

She could hear the coachman breathing, she was that close, but he was breathing heavily, she assured herself. He was scared and out of shape. He must be making more noise than she was. As she raised herself to a crouch, the highwayman turned towards her and Rose froze in a squat among the shadows of the trees. After a while, he shrugged and turned away, leading his horse to the door of the carriage, and Rose breathed out.

“Open up,” he shouted, rapping with the butt of his pistol. “Forgive the cliché, but … your money or your life.”

The occupants whimpered and swore, but they opened the door and, one by one, their valuables clinked into the highwayman’s sack.

“And the rest,” he said, with a bored rattle of his bag. “Though I can assure you I wouldn’t object to undertaking a thorough search of these young ladies. Not so much you, madam, but your daughters really are lovely.”

The ladies twittered in delighted outrage. Rose couldn’t see him clearly, but the highwayman’s charisma was evident even from this distance.

“It seems pretty unlikely, to be honest,” said the highwayman. “But I’m certainly not willing to be hanged for half of your valuables. I may as well shoot you if I’m to hang anyway, don’t you think? Come on. I haven’t got all night.”

The next time he spoke, his voice was petulant.

More treasures were surrendered, more threats made, until the thief was content. He fastened the booty to his saddle and doffed his feathered hat with a flourish.

“Thank you, ladies, gentlemen. A great pleasure doing business with you. Apologies for any inconvenience, and my very best for your onward journey.”

Replacing his hat, he swung himself on to his horse.

“It’s been special,” he said, with a hand to his heart.

Posted by Creative Writing at Leicester at 03:29