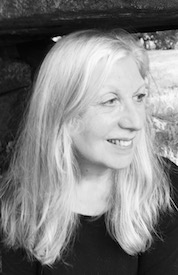 Elizabeth Baines is the author of two short story collections, Balancing on the Edge of the World and Used to Be, and two previous novels, The Birth Machine and Too Many Magpies, all published by and available from Salt. Her new, metafictive novel, Astral Travel, explores the effects that secrets forged in the cultural, religious and sexual prejudices of the past can have on subsequent generations, and the power and potential tyranny of storytelling, and the difficulty sometimes of getting at the truth. Her website is here. She blogs here. 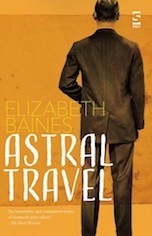 There were always two versions of Jo Jackson’s Irish father Patrick: the charming, talkative man he was in the outside world and in the tales Jo’s mother would tell her of their early life together, and the man Jo and her siblings experienced: bad-tempered, broody and uncommunicative, and given to violence towards them – an experience that has affected them into their adult life.

As the most rebellious of the siblings, and therefore the one he most had it in for, Jo long ago distanced herself from him, but, now a writer, after his death she finds herself drawn to write about him. Yet the more she thinks about him, the more she trawls her own memories and quizzes her mother, and the more she tries to investigate his past in Ireland, of which he hardly ever spoke, the more the mysteries deepen …

Below, you can read an extract from the beginning of Astral Travel.

It was the winter I discovered I had a cyst in my belly, grown all without my knowing, and my sister’s heart started banging as if it wanted the hell out of there now.

I went over on the train to the hospital she’d been taken to and rushed down the corridor and into the ward. She was sitting up, dark curls on end, still hooked to the monitor, but they’d given her a shot and her heart rate was back to normal. She was scowling, reminding me of our father, because they wouldn’t let her out of bed and she badly needed to pee.

There was a bed pan on the cover near the bottom of the bed. I said, ‘Use it, I’ll draw the curtains.’ She said, ‘You’re joking! Here?’ and looked around in horror at the drugged or sleeping patients each side and the curtains drawn on the bed opposite.

It’s a small town, of course, the one she still lives in, where our parents settled at long last when we were in our teens, and where she’s been a librarian all her adult life. She has her mystique to keep up.

The nurse came along and said my sister was OK now, her heartbeat had been normal for four hours, she could ring her husband to come back from his work to fetch her. As she took off the last plug my sister jumped from the leash and fled to the lavatory near the nurses’ station, slamming the door with a sound that rang round the ward.

I didn’t tell her about the cyst. And of course, the heart-thumping matter of the novel I had written, the novel about our family, wasn’t mentioned. By then the subject was completely avoided.

When I was six and my sister was four, she came down with scarlet fever, the one other time she was ever in hospital, carted off to an isolation hospital in the north Welsh hills.

We had only just moved from south Wales, the first of what would be several moves.

I sat outside the hospital in the car with my father, our baby brother asleep in the back in the carrycot, while our mother went in to visit her. Someone held her up at a hospital window for me to see her, but what I saw didn’t look like my sister, like Cathy: we were too far away and the window seemed to be frosted; all I could see was a pink thing that made me think of a shrimp. I guess we must have gone at bath time and they were in the bathroom.

For years afterwards Cathy would recount the horror of that time, considering it one of her major childhood traumas: the enforced baths in Dettol; the compulsory drink of sickly Ovaltine at bedtime; being made to march beforehand down the central aisle with the other children, with their various strange accents, singing a song she didn’t know in which you claimed to be something called an Ovalteenie, although she had no idea what that was.

Knowing nothing of this, cut off from my sister for the first time since I crawled across my mother’s exhausted body to look at her newborn face and exclaim in wonder, ‘Is she ours?’, I felt a new bleakness and sense of loss. The hills outside the car window were alien and bare, and my father was broody and silent beside me, which was how he had been since we’d moved here.

And there was something that had recently come to me, a disappointing realisation. I wanted to ask my father about it.

He’d seen fairies, he’d said, in Ireland where he was born, and even here in north Wales. He insisted upon it. I’d looked and looked, desperate to see them myself, but never had. And now I had read that they didn’t exist.

He didn’t respond in the way he would have done once, with a languid, crooked-toothed, teasing grin. He didn’t turn to me. His eagle-nosed profile was a stony sculpture against the car window. He was smoking, of course.

I persisted. ‘Well, it’s like Father Christmas, isn’t it?’

He had gone completely still, and I knew what I’d done. I’d forgotten that he didn’t even know I knew about Father Christmas. My mother had said better not tell him, he’d be disappointed.

‘Daddy?’ He was still silent.

Finally he said, ‘No,’ with such frozen shock and, yes, such flat disappointment, that I was filled with guilt and dismay. And a sense that things between me and my father would never be the same again.

Well, that’s how I remember it. But what do I know? Things get lost, memory can be muddled. As I say, by then, by the time we sat outside the hospital in the hills, my father had already changed. He was no longer the father who took me with him on his insurance rounds, rattling in the little Austin Seven down the flickering country lanes of south Wales, zooming up to the hump-back bridges with a grin, fag in the one hand on the wheel or stuck behind his ear, laughing his head off as I left the leather seat and squealed with delight. By this time, probably, he’d starting hitting us.

And it wasn’t as if I went on not believing in fairies. I wanted to believe in them, or rather I didn’t want not to. After that day, on Sunday outings to those hills I’d take a bag of silver charms I’d cut from the tobacco-smelling silver paper from my father’s cigarette packets, hearts and flowers, bows and stars and sickle moons. I’d scatter them in the gorse, an offering and a plea for the fairies to appear and prove themselves.

As I begged for the silver paper and he handed it over, my father would snigger.

And a lot of what I remember is not the same as what the others remember, which was partly what caused the trouble when I tried to write a novel about it all.

Posted by Creative Writing at Leicester at 12:26