"The Call of the Wild" in Children's Literature 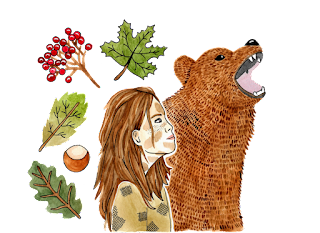 I hope everyone reading this is doing well, even if the universe isn’t making it easy right now.

I’m Millie Henson, I’m 22, and I’ve recently finished my MA in Creative Writing at the University of Leicester. I returned home to Derbyshire to finish my dissertation, where long walks through overgrown paths and forests inspired some of the themes of nature in my story. I grew up learning the names of wild plants, like elderberries, sloes, and dandelions (and I was assured I could make wine out of all of them). I wanted to bring some of that natural childish wonder to my final project.

My dissertation was a 12,000-word middle-grade children’s story written from the perspective of a feral child in Suomi (Finland). The protagonist, Aria, was raised in the forest by a bear who became her adoptive mother. The key themes in this story include kindness and tolerance, which are developed through Aria’s connections with other children in the village as they try to help her understand the human world. Common tropes in children’s literature such as ‘The Call of the Wild’ are usually used to deter children from going into the forest, or other supposedly dangerous places, alone. I wanted to subvert these expectations by showing how, from Aria’s perspective, human society was a place of greed and malicious intent, whilst the forest was a peaceful place she wished to return to. She imagined the forest was calling to her: ‘Come home, where the trees will hum and sing for you.’

When I researched pre-existing children’s literature about children being raised by animals, I realised that most books involve a fantasy element. Either the children are transformed into animals or have some magical way to communicate with them, often caused by an enchantment. This is most likely for practical reasons; it’s harder to hold onto a child’s attention without the main characters being able to speak to each other. However, I wanted to maintain a sense of (magical) realism, which meant I had to research real-life cases of children living with animals.

What I found was the complex history of feral children, who were raised by wild animals or lived alone in the wilderness away from civilisation. Michael Newton’s A History of Feral Children (2011) discusses case studies of children being raised by bears, wolves, dogs, tigers, and monkeys. These animals took mercy on children who would otherwise have died of exposure or starvation, which shows how a maternal instinct can transcend species. For centuries scientists have explored the effects this has on children, who often never regain full powers of communication. Unfortunately, many academics dehumanise feral children by questioning their intelligence, emotional capacity, and whether they can be considered ‘human.’ Since I was basing some of Aria’s speech and behaviours on these real-life cases of feral children, I wanted to ensure that I did so respectfully, by showing the world from her perspective, including her instinctive thoughts and feelings, instead of making her a curiosity

Writing a children’s book allowed me to incorporate one of my other passions, art. I created watercolour illustrations, such as Aria and her bear mother surrounded by Finnish plants and leaves, and I added a border to make the pages more colourful. Children’s illustrations can be important not only for engaging the young reader, but also for helping to create a tone for the story. This is why I based my paintings on artwork I had seen alongside traditional fairy tales. 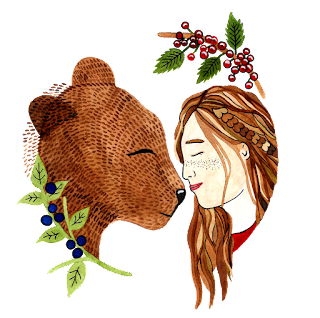 I found writing my dissertation very rewarding, as I could see the story come together from concept to completion. Don’t get me wrong, the idea of writing 15,000 words in three months was daunting at the beginning. I came up with a loose plan for the plot, which involved Aria’s relationship with her bear mother, missing rubies, and poisoned flowers, but I began writing before I knew exactly what was going to happen. I didn’t look out for grammar or repetition, or whether everything sounded how I imagined it. During my Master's, I’ve learned that it’s far easier to go back and edit a messy paragraph than to stare at a blank page hoping the perfect sentence will come to you.

I’m always wary about giving writing advice as different processes will suit different people. What works for me is structuring my writing around lots of achievable deadlines. Writing 500 words seems much easier than writing 15,000. Then once you finish a task you can tick it off, and that rush of serotonin will motivate you to start the next one. If you feel like you’ve been staring at the screen for too long, your eyes have gone blurry, and your words don’t make any sense, it may be time to take a break. Never underestimate the power of a cup of tea. A few minutes away from your desk will clear your head and allow you to come back to your work in the best possible mindset.

Below, you can read an excerpt from my Dissertation.

Prologue from Mari and the Red Mist

Have you ever been alone in the forest, and felt the wind whisper in your ear? That’s Otso, the bear spirit, the invisible king of the forest. He lives in Finland, Suomi. The land of wild winters and sweltering summers.

No one knows exactly how Otso came to rule over the forests. Legends say that he was nursed by the goddess of the woodlands in a cradle of gold, suspended between the branches of a fir tree.

In the runes he has many names, maybe you’ve heard them? Golden Light-Foot, Honey-Paw of the Mountains.

Some believe that when a child disappears into the woods, Otso transforms them into a bear cub so they may survive. When they grow into a mighty bear the forest becomes their kingdom too. They have no boundaries; the only limit is how fast they can run or how high they can climb. Until, eventually, they forget they were ever human.

Of course, this is only a fairy-tale. 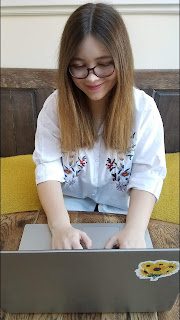 Posted by Creative Writing at Leicester at 04:43