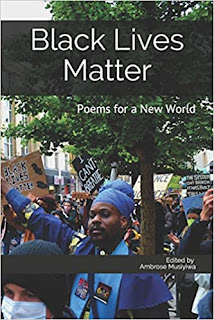 In May 2020, George Floyd’s murder was captured on mobile phone video by active bystanders. The video showed a white policeman pressing his knee against Floyd's neck and keeping it there for close to nine minutes until Floyd died. The murder triggered months of mass protests in the United States and around the world.

The protests have been taking place in the midst of a global pandemic that, in Europe and the United States, is also disproportionately killing people from Black, Asian and ethnic minority backgrounds.

An entry on Wikipedia highlights how "Black Lives Matter," "Hands up, don't shoot," "Am I a threat?," "I can't breathe," "White silence is violence," "No justice, no peace," "Is my son next?," "Get your knee off my neck," and more, have become rallying calls against the killing of Black people by the police and against racism, racialised inequality, discrimination, violence and oppression.

Around the world people are demanding justice and change.

We were looking for submissions exploring any of the images, issues, histories, lives, demands and outcomes that are being highlighted by Black Lives Matter and current and past protests. We were interested in submissions from writers of all ages and backgrounds, based anywhere in the world.

We received close to 500 poems from over 300 writers around the world. Black Lives Matter: Poems for a New World presents 107 of these poems from 95 writers. The poems were selected for how they respond to the theme and for how they speak to others in the anthology.

I commend the poems to you and hope they will also encourage you to keep insisting that Black Lives Matter in your village, town, region and country and in the places from which you get your livelihood, goods and services.

About the author
Ambrose Musiyiwa coordinates Journeys in Translation, an international, volunteer-driven initiative that is translating Over Land, Over Sea: Poems for those Seeking Refuge (Five Leaves Publications, 2015) into other languages. Books he has edited include Bollocks to Brexit: an Anthology of Poems and Short Fiction (CivicLeicester, 2019) and Leicester 2084 AD: New Poems about The City (CivicLeicester, 2018). He is the author of The Gospel According to Bobba.
You can read an interview with Ambrose on Everybody's Reviewing here.
Posted by Creative Writing at Leicester at 01:46