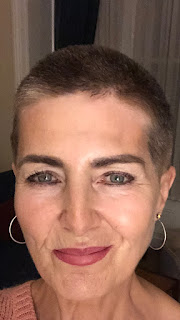 Kerry Hadley-Pryce was born in the Black Country. She worked nights in a Wolverhampton petrol station before becoming a secondary school teacher. She wrote her first novel, The Black Country, whilst studying for an MA in Creative Writing at the Manchester Writing School at Manchester Metropolitan University, for which she gained a distinction and was awarded the Michael Schmidt Prize for Outstanding Achievement 2013–14. Gamble, her second novel, was shortlisted for the Encore Second Novel Award, 2019. Both novels were published by Salt Publishing. She is currently a PhD candidate at Manchester Metropolitan University, researching Psychogeography and Black Country Writing, and is working on her third novel, God's Country.

Kerry's website is here. You can read an earlier interview with Kerry Hadley-Pryce on Everybody's Reviewing here. 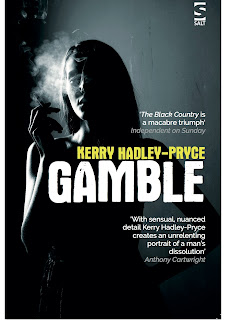 Greg Gamble: he thinks he can keep his head in the game. He thinks he’s trying to be good. Until he realises everyone is flawed.

And for Gamble, trying to be good just isn’t enough.

To him, she’d taste of vanilla, or cucumber, or raw chives, perhaps. She looked like that kind of girl, he thought.

He’ll say he’d watched her arrive, and how the van was parked across his driveway. It would have bothered him before, anyone parking across the driveway; that day though, he’d stood at his living room window (the ‘lounge’, his wife, Carolyn, called it. He hates that word: lounge) and he’d watched her, this girl, through the gap in the mesh of net curtain, and he’d wondered what she’d taste like. He felt a little bit sick – sometimes standing for too long did that to him – but he was trying to ignore all that, and anyway, it was Monday, and he’ll say he always felt the cloy of nerves at the start of another week of teaching. So, watching the girl was taking his mind off all that. Words like ‘willowy’, ‘asymmetrical’ and ‘seemly’ mixed with ‘uncareful’, ‘wild’ and ‘brash’ in his mind as he watched her. Her hair, he noticed, was almost blonde – some bits of it were rapeseedy, he decided – and she seemed to have a habit of pushing stray strands behind her ear. She did that a lot, he noticed. He counted. Fourteen times. There seemed a regularity to her way of doing it, and it reminded him of poetry, the way she kept repeating it. She was carrying cardboard boxes into the building opposite and, as he stood watching her, he came to realise he’d never really noticed it, that building. It was a building, and it was just there opposite his 1950s semi. Looking back now, he questions all that. But he was noticing the girl, just then. She wore, he thought, very red lipstick, and that made her look odd, or the lips look odd, like she had a permanent pout, or had been punched, and he found he was forming an opinion about that. He watched her enter the building and then reappear, and became aware that, with every appearance of her, he’d suck in his stomach, straighten his back. Becoming aware of it made him feel somehow ineligible and a little despairing. He’ll say he realised then, he needed someone to talk to. Just to talk.

Posted by Creative Writing at Leicester at 01:52