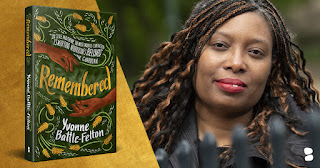 Yvonne Battle-Felton, author of Remembered, is an American writer living in the UK. Her writing has been published in literary journals and anthologies. Remembered was longlisted for the Women’s Prize for Fiction (2019) and shortlisted for the Jhalak Prize (2020). She was commended for children’s writing in the Faber Andlyn BAME (FAB) Prize (2017) and has three titles in Penguin Random House’s Ladybird Tales of Superheroes and three in the forthcoming Ladybird Tales of Crowns and Thrones. Yvonne has a PhD in Creative Writing from Lancaster University and is Lecturer in Creative Writing and Creative Industries at Sheffield Hallam University.

Yvonne writes because she loves endings, secrets, and stories. She writes for children and adults, creates literary events, moms, and plans (in her spare time) to take over the world one story at a time. 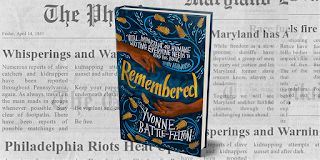 It’s 1910 and Philadelphia is burning. The Union is threatening to strike. The Company is threatening. Tensions have boiled over and flow through the street like blood, shattering communities like glass.

In the middle of this glass lies Edward. He was in the streetcar that barrelled down a lane into a shop window of a segregated store. Was. Pulled out of the wreckage by an angry mob, Edward is beaten by them and the police for a crime he may or may not have committed.

Set in 1910 Philadelphia and 1840-1864 Maryland, Remembered is a historical fiction, framed narrative that follows Spring and her sister before they were born, through slavery, and beyond, through stories of Spring’s life and Tempe’s death. Through vivid descriptions, complex characters, and haunting, the novel explores 24 years in America’s slaveholding past over 24 hours in its post-emancipation present. Remembered is the story of Spring, his mother, and her dead sister Tempe’s journey to lead Edward home.

Below, you can read an extract from Remembered. 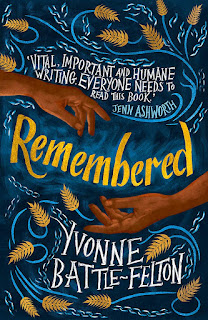 ‘Ready or not, here we come!’ Tempe shouts.

Tempe’s long, shapely legs carry her to within inches of Watson. It don’t look like she’s hardly breathing. She cuts through the yard with hardly no effort at all. It don’t seem fair. Tempe can catch him anytime she wants. She knows the land and made the rules.

‘Gotcha, gotcha, gotcha.’ I tap each little head quickly, dashing from one to the next so I can turn back to the race. There are no tears this time. The little hearts race along with Watson’s.

Watson is just a few strides ahead of Tempe. If she leans forward just a little more she’ll have him. If not, he’ll reach the porch, Sanctuary, seconds before her. He slows, and even from the back of his head I know he’s grinning. He zags sharply. You’re running the wrong way! I can’t get the words out fast enough. But then I see. He isn’t running the wrong way at all.

The women must have heard the commotion. Armed with broomsticks they take to the porch in synchronized annoyance. They stand guard. Around back, the men have already stopped talking about the war, escape and freedom. They’re out front, gruff voices whispering: Run.

Tempe must have seen it then. We all do. Watson isn’t running for the porch. Tempe stops. She stands still whispering: Run, run, run, along with everybody else. Watson never stops running. I wish he had taken me with him.

Posted by Creative Writing at Leicester at 13:36