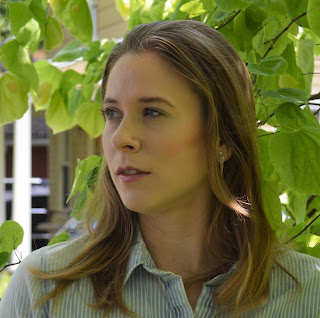 Alyse Bensel is the author of Rare Wondrous Things, a poetic biography of Maria Sibylla Merian (Green Writers Press, July 2020), and three poetry chapbooks, most recently Lies to Tell the Body (Seven Kitchens Press, 2018). Her recent poems have appeared in Alaska Quarterly Review, Blackbird, Pleiades, Puerto del Sol, Ruminate, West Branch, and elsewhere. Her fiction and nonfiction have been featured at The Boiler, Entropy, and Pithead Chapel. She currently serves as Poetry Editor for Cherry Tree and as section editor of Theory, Culture, and Craft for the Journal of Creative Writing Studies (JCWS), an open access, peer-reviewed journal. Her book reviews have appeared in AGNI, Colorado Review, Prairie Schooner, Literary Mama, Tinderbox Poetry Journal, and many other journals. Alyse is an assistant professor of English at Brevard College, where she directs the Looking Glass Rock Writers' Conference. Her website is here. 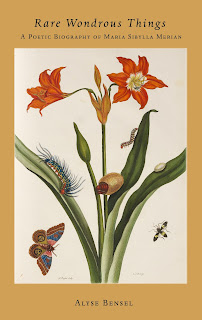 Rare Wondrous Things is a poetic biography of Maria Sibylla Merian (1647-1717), a German artist and naturalist who made ground-breaking discoveries in entomology. I chose the term "poetic biography" rather than "biography in poems" to highlight the fragmentation and gaps in understanding Sibylla Merian's life. Since only about a dozen letters of her personal and professional correspondence still exist, and her other writings were mostly observational notes, this collection undertakes the impossible task of reconstructing Sibylla Merian's voice and complexities. As one of the first Western Europeans to illustrate the ecological connections that occur during Lepidoptera (i.e. butterfly and moth) metamorphosis, Sibylla Merian led an exceptional life—she even travelled to Suriname colony at 52 years old in the pursuit of knowledge—yet her name has largely remained in obscurity and her personal life shrouded in mystery, especially in an American context. These poems investigate her legacy by exploring the tensions between science and religion, professional aspirations and motherhood, wifehood and independence, and biographer and subject.

Below, you can read three poems from Rare Wondrous Things. 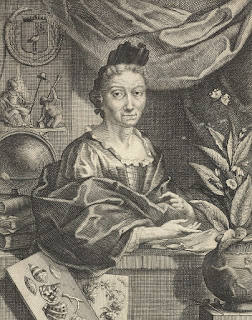 To kill a butterfly quickly

hold a darning needle
point to the flame. Let
it glow hot and red. Stick

it alive—it will die
fast with no damage
to its wings. Coat the little

cedar box where its body
is placed with lavender oil,
so worms cannot bore

in to feed. Follow these
notations here precisely.
Preserve and keep each

rare, wondrous thing
and never have it fade
if kept forever from sun

in its now still sanctuary.

Engraved in Copper and Published Herself

My husband always stayed close
to drink, red-faced with a smile loose

like unspooled thread on the table set
aside for me as a girl, scattered

with embroidery and watercolors. I skirted
the law—my stepfather agreed to let me

feathers to copy designs while they mixed
inks smelling of earth and crushed shells.

The machinery radiated elemental heat.
My mother made me scrub my ink

stained hands until they reddened raw,
palms cracked. I had the precision

of smaller hands. I accrued skill
until I could be set to marry

a man who watched my talents
grow, who needed a better family name.

He became my printing press, the source
of copper and care to wipe the ink, perfect

the line. I measured the cut into metal, a relief
bit into wax design. The ink settled into

miniature valleys made with needlepoint,
an embroidery for what lasts longer

than velvet. I washed away the excess.
I had been left so little. He gained.

A two-woman play about Maria Sibylla Merian in Suriname by Karen Eve Johnson
“What kind of woman is this? She is not like the other Hollanders. No man beside her. She always has her nose in the insects. Always why and how.”

Jacoba is a woman erased
on the ship’s passenger log.
She and Maria hope to learn
of a life in heat and another life
distant and wind-struck, self-made.
A daughter is lost. A daughter is
absent offstage. Trapped inside
her own projected watercolors,
Maria flutters. Jacoba watches.

For light Jacoba collects lantern
flies. She tells Maria how to use
bright flowers that end in death:
the moon flower, its creamy white
poison for everyone but a caterpillar.
The peacock flower, to rid oneself
of children that would wither.
She counts her life in losses,
what she cannot regain.
Maria, her mouth sharpened
by the heat, the wasps, bids her to go.
Her frustrations grow out
of fertile soil doused in sugar.
News travels slower in the heat.
The morphos daze on, oblivious.
Maria grasps onto work, yet the fever
sweats on and holds. Jacoba wonders
how one can love so many creatures
but not want to free her own.
Posted by Creative Writing at Leicester at 05:55