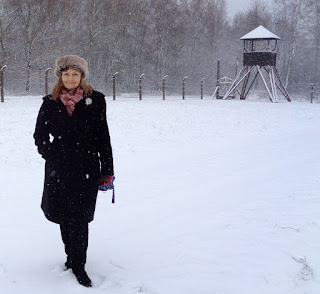 I have been writing stories and poems since I was six. After an English degree at Cardiff University I became a newspaper reporter, moving to BBC TV as an historical documentary writer / producer / director. I have published five poetry collections in the UK as Maggie Butt and my poetry website is www.maggiebutt.co.uk.

I have been married since 1982, and when our daughters were born I left the BBC and began teaching creative writing at Middlesex University, where I stayed for 30 years. It was a huge delight and privilege to foster the writing of others. In addition to writing and teaching, I have also been a fellow of the Royal Literary Fund and Chair of the UK’s National Association of Writers in Education and have a PhD in Creative Writing from Cardiff.

In spring 2020 (when all the bookshops were closed), my novel The Prisoner’s Wife was published in the UK, New Zealand, Australia, the USA and Canada, by imprints of Penguin Random House, under my maiden name of Maggie Brookes. My fiction website is www.maggiebrookes.uk. 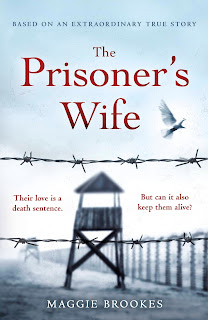 About The Prisoner's Wife

Serendipity is an important part of a writer’s life, and it gave me the story which became The Prisoner’s Wife. It’s an extraordinary true story of love and courage, which was told to me in a lift by an ex-WW2 prisoner of war. He said, "I bet I could tell you a story about the war which would make your hair stand on end," and I was hooked.

He described the day two "escaped prisoners" were brought into the camp and one announced that the other was his Czech wife. The British PoWs decided to hide her in plain sight, dressed as a man, and she remained disguised as a soldier for the last six months of the war. I began to think what it was like for her to keep absolutely silent, to be surrounded every moment by men and under the gaze of the Nazi guards.

My research took me to the Imperial War Museum, to memoirs, letters, PoW Associations and finally to the Czech Republic, Poland and Germany. I first wrote the story as a long narrative poem and it was published by Snakeskin poetry e-zine as a downloadable e-chapbook and MP3 recording. Then I decided it deserved a bigger audience, and wrote it as a novel.

Below, you can read an extract from the novel. 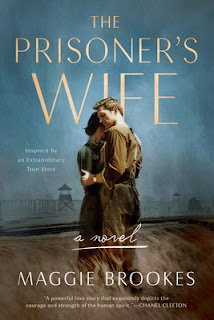 From The Prisoner’s Wife

Everything was quiet and still, apart from the light crunch of our boots as we crept down the deserted street. The sliver of moon disappeared behind a cloud, and we slowed our pace, barely able to make out the way ahead.

That’s when we first heard the dogs. Only one bark at first, carrying in the quiet of the night. We clutched each other’s hands, and stood still for a moment.

Then another bark.  And another.  Not muffled by the walls of a building, but out in the night, like us, out in the streets.

Instinctively we moved away from the sound, and the buildings glowered at us, closing in. My heart was drumming, and my breath came fast. We walked more quickly. The dogs were barking, closer, echoing off the buildings, perhaps two of them, perhaps three. We turned to see if they were in sight, but the darkness was too absolute. We were acutely aware of the noise of our boots on the cobbled road.

And then there were shouts behind us, men’s voices, excited to have something to do in the boredom of the night watch, egging on the dogs, eager for the hunt. Whichever way we turned, the dogs and the men grew closer and our boots clanged louder.

It became a town of sounds: our breath, the pounding of our own blood in our ears, the clatter of our boots on the road, the dogs barking, men running and calling, closer, closer. Perhaps we could have stopped, knocked on a door and begged for help, but we didn’t. We just kept going, faster and faster, running, Bill dragging me with him. I was breathless to keep up, my kit-bag banging awkwardly against my legs.

At last there was an opening in the terrace, an archway which led into a narrow arcade, lined with dark shops. Towards the end of the alley was an even darker place which looked like another turning, but it was only a wide doorway, up two steps, set back and hidden until we drew level with it.

Now the dogs were almost on us, and Bill pulled me up into the doorway, threw his arms around me, squeezed me very hard and whispered, “I’m so sorry,” into my hair.  Then he pushed me away from him, so we wouldn’t be found touching. I shut my eyes and waited for the dogs’ teeth, hoped it would be over quickly.

Everything seemed to happen at once: the dogs, the men, a searchlight in my face. I raised my arm to cover my eyes, and heard the panting breath of the men, the loudness of their voices. My teeth were chattering and I had to clamp them shut. The voices behind the light became one disembodied shout in German from the senior officer. “Hands up!  Against the wall!”

We stumbled down the two steps. Bill went to one side of the doorway, and I to the other. I raised my hands arms and leaned my face against the wall to stop myself from falling, feeling the rough of the brick against my cheek.

Behind the wall I sensed the people who lived there, scurrying like mice, listening with excitement and maybe, who knows, with pity. I bit my lips, determined not to sob, not to let it end this way. 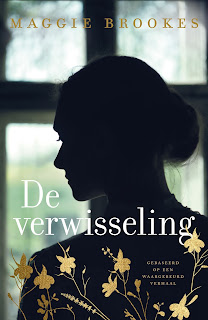 Posted by Creative Writing at Leicester at 04:26