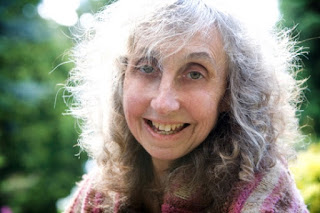 Alison Brackenbury was born in 1953, from a long line of servants and skilled farm workers. Her work has won an Eric Gregory Award and a Cholmondeley Award, and has frequently been broadcast on BBC Radio 3 and 4. Her radio features often reflect her passion for many kinds of music, including folk songs. She has published ten collections of poetry. Her most recent, Skies, (Carcanet, 2016), was chosen as a Poetry Book of the Year by The Observer. Gallop, her Selected Poems, was published in 2019 by Carcanet. She is very active on social media, posting quotations, nature photographs and occasional poems on Instagram, Facebook and, in accidental capitals, as @ABRACKENBURY, on Twitter.

Alison can be heard reading a selection of her poems at the Poetry Archive site here. New poems can be read on her website here. Her recent reading for the Edward Thomas Literary Festival can be seen here. 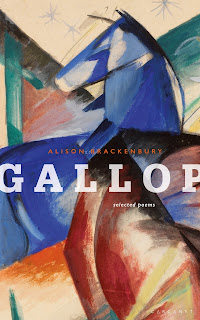 It is my earnest hope that poems are wiser than their writers. Certainly they preserve patterns which can be missed in the rush of daily life. (I had good reason for calling my Selected Poems Gallop ...). One of the earliest poems in my first book looked back to my grandparents’ generation, some of whom were still alive. It celebrated their talents and their kindness. Perhaps rather shyly – like them – it tried to sing. Above all, it saw their strengths, and their mysteries, as a beginning: a glimpse not just of the past, but of the future.

My old are gone; or quietly remain
Thinking me a cousin from West Ham,
Or kiss me, shyly, in my mother’s name.
(My parents seem to dwindle too; forget
Neat ending to a sentence they began,
Beginning of a journey; if not yet.)
Cards from village shops were sent to me
With postal orders they could not afford.
They pushed in roots of flowers, carelessly,
And yet they grew; they said a message came
To say the Queen was dead, that bells were heard.
My old are gone into the wastes of dream.
The snow froze hard, tramped down. Old footprints pit
Its smoothness, blackened footprints that I tread
That save me falling, though they do not fit
Exactly, stretching out beyond my sight.
My old are gone from name. They flare instead
Candles: that I do not have to light.

Like many generations of my family, I grew up in the country. From a remote Lincolnshire village and from tiny schools, I won a scholarship to study English. But I did not become an academic. My first job was as a librarian in a technical college. My last job (for 23 years) was as 50% of the manual workforce in my husband’s family metal finishing business. I lived in town, with too many cats. I spent almost all my free time on the hills, with a series of long-lived, always loved and sometimes unaffordable shaggy ponies.

The advantage for a writer of this kind of unorthodox, physical, frantically busy life is that it throws up compelling subjects. The danger is that there is little time to write about them, or to keep technique as supple as the newly-oiled bridle in the kitchen.

I hope that, in my middle years, sometimes troubled, sometimes exhilarating, that enough was salvaged ...

If he had stayed
in the four white walls
or alone in his patch, the untidy hedge
strewing its roses through empty hours
he would never have met the dark mare
whose neck he licked by the elderflower
whose kick snapped his straight cannonbone.

For sixteen weeks he must stand in the straw
watching the light wash and ebb.
All warmth will have flowed past when he stumbles out
November's wind raw on his leg.
Was it worth it?  He shuffles, he cranes to the lane,
calls her, and calls her again.

In my sixties, in a strange season beyond horses, I had to leaf through thirty years of poems, to choose those which I wanted to fit into one book.  I realised that my work had changed. The new century had brought me closer to the songs which my grandfather sang to me (raucously). Like those songs, my newer poems almost always rhymed. They drew on my thirty years of living in a small Gloucestershire town. They also recalled the astonishingly dark nights of my Lincolnshire childhood. They thought of the living and of the dead. They tried, as I still do, to find their music.

It began, like wonder, back there
in the village’s dark huddle
which I can never visit, like a star.

pure ice.  Above my wreath of breath,
the weak eye of the one streetlight
beyond Back Lane and Temple Garth,

skies pricked with white until the night
swam with its stars.  In their grave blaze
they filled my gaze like wings in flight

which never left, unlike the house,
the anxious moves, my mother’s care.
For years I stood by my own house

with books and charts.  My father there
could only name the tilted Plough
he followed with the snorting pair.

But I found Pegasus, the slow
sweep of the Swan, a fierce red eye,
the Bull.  I watched the Hunter go

with frost’s belt, over towns where I
now lived, where, still, the galaxy
boiled by his sword in clouding sky.

The books are laid aside. I see
new roofs, more weak lamps.  Whirled and free
the stars, my calm dead, walk with me. 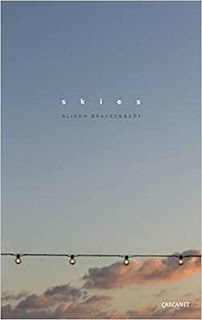 Posted by Creative Writing at Leicester at 08:41