Matthew Stewart, "The Knives of Villalejo" 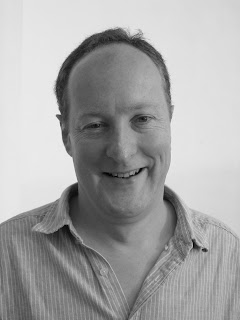 Matthew Stewart works in the Spanish wine trade and lives between Extremadura and West Sussex. Following two pamphlets with HappenStance Press, he published his first full collection, The Knives of Villalejo, with Eyewear Books in 2017. His more recent poems have featured in The Spectator, The New European and Wild Court. He blogs at Rogue Strands. 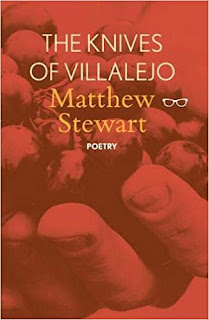 About The Knives of Villalejo

My poems begin with the truth. They then generate a world that lies beyond mere facts, reaching out for authenticity of feeling, aiming to generate a jolt of recognition that enables readers to set off on their own journeys.

The piece from The Knives of Villalejo that follows is a case in point. It might ostensibly be about an incident at a wine trade fair in Germany, but that's not to say the incident in question took place there or even took place at all as portrayed in these lines. There was, however, a moment somewhere, somehow, a memory that demanded to be captured and then transformed. This process ended up as an implicit invitation to readers to reach beyond a posh hotel in Düsseldorf, to recall, renew and reassess their own experiences. How did they learn to deal with their school tie? Do their parents somehow still accompany them when they undertake a task that was taught at home decades earlier?

At Prowein
In a plush, anonymous room
just before the trade fair opens,
I reach for a tie, ignoring
the looming, wall-to-wall mirror.
I close my eyes and stall my thoughts,
and Dad’s behind me once again.
We coax a perfect, funnelled knot
and pour me out as if to school.

Posted by Creative Writing at Leicester at 08:30