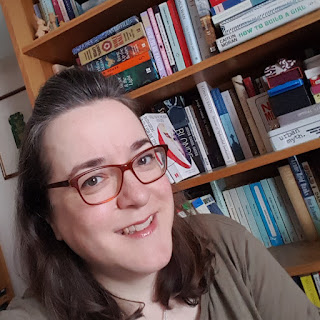 Julia Bird grew up in Gloucestershire and now lives in London, where she works for the Poetry Society and as an independent literature producer and promoter at Jaybird Live Literature. She has two poetry collections with Salt – Hannah and the Monk (2008) and Twenty-four Seven Blossom (2013) – and Now You Can Look, an illustrated poetry pamphlet, was published by The Emma Press in 2017.

You can read a review of Now You Can Look on Everybody's Reviewing here. Julia's website is here. 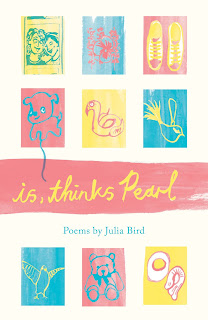 About is, thinks Pearl, by Julia Bird

Step into Pearl’s world and take a tour around her faded seaside town, past the graffiti walls, bus stops and the old mattress factory. Except – with Pearl as our guide – the colours suddenly pop and every tiny detail becomes rich with interest. From the lido to the hair salon, to the Christmas shop in June, the ordinary becomes magical and every bit of wildness, weirdness and tattiness is whisked into the foreground.

“Pearl” is an alter ego of the poet: she’s a character who observes the minutiae around her and whose thoughts are a pleasure to follow. This pamphlet follows Pearl as she rollicks around, making her way through a townscape similar but not identical to the too-small-to-be-cities of poet Julia Bird’s 70s & 80s childhood.

From is, thinks Pearl
Helium Pearl
The man who stands all day in the high street
selling helium balloons is, thinks Pearl,
weighed down by the cumulus of gas and foil
capping low above his head. The drag on him
of a hundred fat cartoons tugging their leads
like young dogs: what if he doesn’t sell out,
what if his mate doesn’t show when he said
he would - how could he herd this tangling
and bumbling stock to a sandwich or a coffee shop?
Pearl knows that even one small silver pup,
its two dimensions startled into three, will not
sit still in the changing room, sit still on the bus:
it only wants to drop and dive back to the sun.
Pearl thinks that, when the time comes, this
is what it might be like to mourn, to tie each
elevating death with a ribbon to your wrist
and feel its unexpected weight every time a door
revolves, or you’re at the cinema in a front seat,
or you’re putting on or you’re taking off your coat.
Posted by Creative Writing at Leicester at 03:27