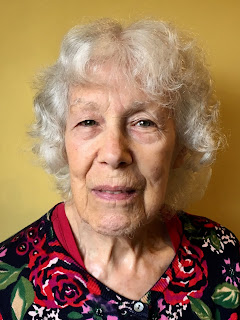 Myra Schneider has had ten full collections of poetry published. The most recent one is Siege and Symphony, in Autumn 2021. Other publications include pamphlets of poetry, books about personal writing, notably Writing My Way through Cancer (Jessica Kingsley, 2003) and Writing Your Self with John Killick (Continuum, 2008). She has also had three novels for young people from Heinemann. Her work has been broadcast on BBC Radio 4 and Radio 3. In 2007 she was shortlisted for a Forward prize. She is consultant to the Second Light Network for women poets, has co-edited anthologies of women’s poetry and she has been a poetry tutor since the late 1990s, mainly for The Poetry School. Her website is here. 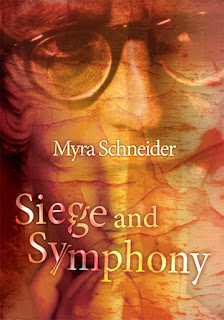 About Siege and Symphony, by Myra Schneider
The main theme of Siege and Symphony is celebration and endurance. This is reflected in the long title poem, which draws on original sources to write about the hardship people suffered in the siege of Leningrad in the Second World War and Shostakovich writing his 7th Leningrad symphony. The poem concludes with a section about the symphony being performed in the city by a depleted orchestra in the middle of the siege. The main theme is further explored in the first part of the book in poems about the state of the planet, and also later in the book in personal poems, poems about other contemporary issues such as homelessness, and poems about women.
From Siege and Symphony
Let Us
throw open splattered windows
and allow light to stream into rooms,
not shine dimmed to a sullen grey
by a skyful of cloud, not the mean rays
of reason which enumerate facts and faults,
kill compassion and make us hide fears
in cupboard dark, not bright beams
chilled by hatred with more bite
than the east wind –
none of these. Let us
open ourselves to today’s unstinting light.
It’s bringing the warmth of ripe apricot skins,
the happy go lucky orange of marigolds,
the clarity of extra virgin olive oil,
the glory of sun alighting on the waters
of Chania.
Look, it’s kindled the kitchen walls
and awakened cushions in the living room
so let us breathe – let us breathe it in
as it glides up the stairs, smiles
on worn carpets, calms worried beds.
Listen, it sounds like bees murmuring
to the rampant brambles out in the garden.
Becoming Plastic
The morning starts with a tiresome battle to slit
and peel skin that fits smoothly as a seal’s.
It’s encasing two tubs of vitamin capsules
but my fingers can’t find leverage and anger
blazes as the sleek containers continue to cling
in their see-through wrapping like inseparable lovers.
Nowadays, everything arrives cosied in plastic:
sultanas, tissues, pears, jumpers, knickers,
the mattress that was tricky to manoeuvre upstairs,
those newly-erected six-storey flats I scanned
yesterday as I walked over Regent’s Canal, each
swaddled in the stuff as if it couldn’t cope with rain.
In the night I dreamt I struggled through a wild sea
to an island of unrotted rubbish and weakling palms.
A sound of laboured breathing rose from the debris
and I knew plant roots underneath were striving
to survive. A dead grouper stared from a pram
which had lost all its wheels, someone screamed.
I turned, was just in time to see a woman
on a bed with legs parted and a midwife plucking
from her womb a baby sheathed in plastic sheeting.
Posted by Creative Writing at Leicester at 12:44