Robert Hamberger, "A Length of Road: Finding Myself in the Footsteps of John Clare" 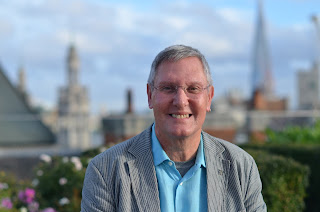 Robert Hamberger has been shortlisted and highly commended for Forward prizes, appearing in the Forward Book of Poetry 2020. He has been awarded a Hawthornden Fellowship; his poetry has been featured as the Guardian Poem of the Week and in British, American, Irish and Japanese anthologies. He has published six poetry pamphlets and four full-length collections. Blue Wallpaper (published by Waterloo Press) was shortlisted for the 2020 Polari Prize. His prose memoir with poems A Length of Road: Finding Myself in the Footsteps of John Clare was published by John Murray in summer 2021. His website is here. 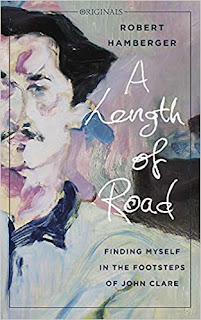 About A Length of Road: Finding Myself in the Footsteps of John Clare, by Robert Hamberger

In 1841 the ‘peasant poet’ John Clare escaped from an asylum in Epping Forest, where he had been for four years, and walked over eighty miles home to Northamptonshire. Struggling with his mental health, Clare was attempting to return to his idealised first love, Mary, unaware that she had died three years earlier.

In 1995, with his life in crisis and his own mental health fragile, Robert decided to retrace Clare’s route along the Great North Road in a punishing four-day journey. As he walked he reflected on the changing landscape and on the evolving shape of his own family, on fatherhood and masculinity, and on the meaning of home.

Part memoir, part nature writing, part literary criticism – with original poetry – A Length of Road is a lyrical exploration of class, gender, grief and sexuality through the author’s own experiences and through the autobiographical writing of John Clare.

From A Length of Road

in chiselled and black-painted letters on a thigh-high pale stone pillar. Nettles and goosegrass surround its base, edging the tarmac walkway. I yank away the stems of an elderflower bush to uncover its face, like it could be an honoured monument. A line of ants is tracking across its foot. Its crown is spattered by a few mustard medallions of lichen, and a rod of iron must be staked through its centre, as I pick at a small black button that won’t budge. I rest my back against it and reread Clare’s account, to make sure it’s the one he mentioned. His journal carries a footnote: On searching my pockets after the above was written I found part of a newspaper vide ‘Morning Chronicle’ on which the following fragments were pencilled ... Wednesday – Jacks Hill is passed already consisting of a beer shop and some houses on the hill appearing newly built – the last Mile stone 35 Miles from London. In fact 34 is carved, but what’s a mile between friends? I feel certain Clare paused here to scribble that note. He couldn’t stop writing, even through his exhaustion, and pencil on a scrap of newsprint would suffice.

I snap a photo like a tourist, lay my palm on stone for blessing. I imagine it, every midnight, spelling its message to foxes and whoever else may be passing. Whereas I’m usually hobbling behind Clare in the long shadow he’s cast, for this minute stopped at a marker where I’m sure he stood in 1841, our shadows briefly cross.

Posted by Creative Writing at Leicester at 03:29