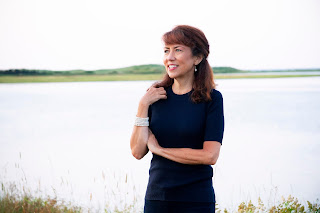 Alison MacLeod is the author of the novels The Changeling, The Wave Theory of Angels and Unexploded, which was longlisted for the Man Booker Prize 2013, and two story collections. Her new novel is Tenderness. She is the joint winner of the Eccles British Library Writer's Award 2016. Her work has been awarded the Olive Cook Award, shortlisted for the BBC National Short Story Award, the Sunday Times EFG International Short Story Award, the Edge Hill Prize and Canada's Governor General’s Award for Fiction. She is Professor of Contemporary Fiction at the University of Chichester and lives in Brighton. Here website is here. 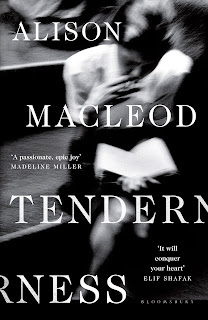 About Tenderness, by Alison MacLeod

D. H. Lawrence is dying. Exiled in the Mediterranean, he dreams of the past. There are the years early in his marriage during the war, where his desperation drives him to commit a terrible betrayal. And there is a woman in an Italian courtyard, her chestnut hair red with summer.

Jacqueline Kennedy and her husband have already been marked out for greatness. Passing through New York, she slips into a hearing where a book, not a man, is brought to trial.

A young woman and a young man meet amid the restricted section of a famous library, and make love.

Scattered and blown by the winds of history, their stories are bound together, and brought before the jury. On both sides of the Atlantic, society is asking, and continues to ask: is it Obscenity – or is it Tenderness?

The dead could look after the afterwards, but here, here was the quick of the universe: the town lifted from sleep in a vast net of light, and the Mediterranean, five miles away at Cagnes, flickering like a great opal. He’d woken early and had watched the dark gravity of the night yield to daybreak. Now the streets were a mirage, half-dissolved in the dazzle of morning. Even the town’s ancient walls were erased, while a barking dog in the road below was more bark than dog. On the balcony, among the geraniums, he squinted: the coastline as far as the Cap d’Antibes shook and shimmered. It was impossible to say where sea turned to sky. The smudge of an ocean-liner materialised at what might have been the horizon, while light streamed – the run-off from the warp and weft of the world. Nothing the day touched remained solid, nothing held, nothing except the geraniums and their defiant fists of red.

The previous day, upright in his underwear in the medical bay, the exile had learned that he was, even still, five feet nine inches tall, or that he was when the state of his lungs allowed him to straighten. He would have been cheered by this fact had he not weighed in at forty-five kilos on the French scales, and one hundred pounds on the imperial – or not quite seven stone. He had insisted on both scales, but the two nations were agreed.

It meant at least that he could go, almost literally, where the wind blew him. The almond trees of the town were a pink-and-white froth of blossom. The breeze, slight as it was, had a reviving salt tang. He needed only his hat and shoes. ‘Are we ready?’ he called into the room.

Posted by Creative Writing at Leicester at 04:02