Nigel Pantling, "It's Not Personal" 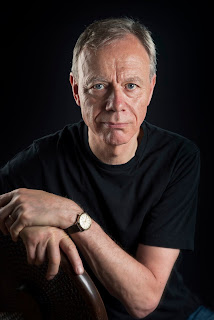 Nigel Pantling has been a soldier, a civil servant and an investment banker, and for the last twenty years has advised chief executives of companies on strategy. He has written about these worlds in two pamphlets, Belfast Finds Log (Shoestring Press, 2014) and Hip Hind Hook (Smith|Doorstop, 2018), which relate the dangers and human frailties he saw as a soldier in Northern Ireland and during the Cold War, and in his first full collection Kingdom Power Glory (Smith|Doorstop, 2016) which lifts the lid on the secret worlds of Whitehall and the City. 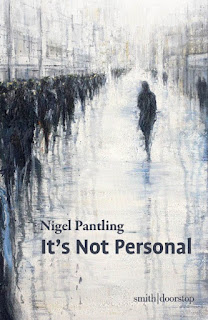 About It’s Not Personal

It’s Not Personal (Smith|Doorstop, 2020) evokes a life, from childhood in the fifties, through the challenges and eccentricities of the workplace, to the unpredictability of family, love, and death. These are poems concerned with truth; but just as importantly, with what it means to tell a story. You can watch Nigel reading from It's Not Personal at the on-line launch, hosted by Martha Sprackland, in November 2020 here. You can read three poems from the collection below.

From It's Not Personal

On the Way Home from Choir Practice
He was older and bigger than me, and his punch
was as glorious and unexpected as
when we trebles hit the top A in the Kyrie.
I’d done nothing to deserve that.
Oh my outrage as I named him to the police.
I wanted him tracked down, humiliated, punished.
The doubts took years. Had I provoked him?
Maybe I’d exaggerated my shock and the pain?
His mother, when she came round to apologise,
blaming it all on her being so ill with the cancer:
how had she deserved that? And how had he?
I’d pressed charges: where was the mercy in that?

Something My Girlfriend Said to Me

Do you remember, when you were a boy,
how the chimes of an ice-cream van
could bring on a rush of excitement,
how you struggled with the choice –
a strawberry mivvi, a rocket lolly,
or a 99 with hundreds and thousands –
how different each felt
in your mouth,
on your tongue,
how wonderful
it was to know that
if you chose a mivvi today,
you could still have a 99 tomorrow?
Well that’s how it is with me and men.
Final Interview for MI6

There are five of them this time, seated in a row.
No introductions and no name cards.
They give you a hard time but you keep going.
Then the young woman, surely the most junior
but doing most of the talking, tells you to imagine
you’re in a hostile country, and to choose one of them
to be the local you have to entrap, suborn, entice,
seduce or otherwise persuade to come over.
She gives that look you’ve got wrong before, so you choose
the blimp beside her, and greeting him like an old friend,
commiserate on his child’s poor health, and then pretend
you’ve had him photographed as he takes your gift of cash.
When you arrive home, the offer letter is on the doormat.

Slippery bastard chose me. 'Hello Mikhail, it’s good to see you,
let’s have a beer, and I’m so sorry to hear the baby’s poorly.'
Chummy as you like. Perfectly believable. Of course I just blinked.
Took some time to get to the point, but at last he offered me cash,
for 'medical treatment,' one diplomat to another, no questions asked.
When he mentioned the camera, it could have been me thirty years ago.
I was for saying no. But none of the others had been in the field.
Posted by Creative Writing at Leicester at 02:01