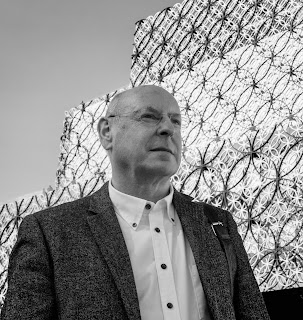 Bert Flitcroft was born and brought up in Lancashire but now lives in the Midlands. He has three collections of poetry published: Singing Puccini at the Kitchen Sink and Thought-Apples, and recently Just Asking. His work has appeared in a number of national magazines and anthologies. He is a prize-winning poet, has been Poet in Residence at the Southwell Poetry Festival and has performed at a number of national festivals including The Edinburgh International Book Festival. He was Staffordshire Poet Laureate 2015–17 and curated the on-line Staffordshire Poetry Collection. He has worked as resident poet with one of our ‘National Treasures,’ The Wedgwood Collection at the V&A; as resident poet with the prestigious R.I.B.A. exhibition ‘The Road Less Travelled’; and recently as part of the University of Keel project ‘Labelling the Museum.’ His website is here. 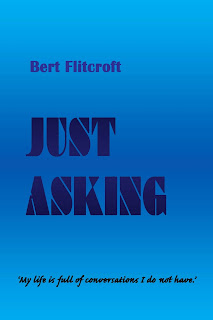 About Just Asking
As the title suggests, this is a collection in which most of the poems set out to pose a question, either directly or by implication, for the reader to consider in the light of their own experience and feelings. These questions may be about specific situations, or more generally about our own sub-conscious, unspoken attitudes to people, places, events and so on. Bert's poetic voice is clearly evident in the collection but with this in mind there are also poems written in the voices of a range of characters.
From Just Asking
To my friends: just asking…
Some days I have nothing new to say
of consequence. No opinion about the rain,
no forthright view about the latest scandal
or the smell of crusty bread.
But should something startling happen:
an angel threaten to descend
or a best friend lost, or an old love found,
these are surely pearls worth diving for.
We have swum in the same sea for years,
so why, when the water feels deep
do you lapse into awkward silence,
close up your hearts and seal them
as tight as oyster shells?
Why the need to keep a cancer secret,
or treat a shortage of sex as a shame
as if it were a sweet grape
withered to an unspeakable raisin?
Or admit to the heat of unrequited love
that has scorched the heart of all of us?
As if these things were a moral failing
or a sign of weakness.
My life is full of conversations I do not have.
This is a matter of soul.
Some days I might as well be up a mountain
shouting into the ice-blue emptiness,
or in the supermarket buying beer and oranges.
It’s grim...
Have you been, to The North?
They say, up there they have an ugly angel,
a rust-coloured, furnace-welded crucifix
with the wingspan of a stadium,
a man of steel holding up the sky
around the fraying edges of the city.
Like Lear, it seems, he is a challenge
to every storm and bolt of lightning.
And he casts a shadow on our conscience,
yours and mine, they say, like a sin.
Sad, really. I’ve seen a photograph.
They say it is deliberately a shocking sight.
Like celebrating grime, I’d say.
You cannot see love in his eyes,
he has no eyes.
Beauty? It can’t be in his smile,
he has no mouth to smile.
No fallen angel this, they say.
Stand at his feet, they say. Look up
at his thick-ribbed pride,
his barrel chest, the bulging calves,
that muscle out their industrial presence,
as if he is watching over them. As if
he is bolted into the bedrock of their being.
It’s how they stand up in the world,
apparently.
Posted by Creative Writing at Leicester at 02:43