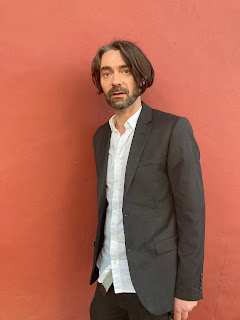 Nik Perring is the author of six books for children and adults, and prize-winning short stories published all over the world.

He’s taught writing in schools, universities, in the community, with UNICEF and for the BBC; he’s been Writer in Residence for Sheffield’s Year of Reading, put poems on the sides of buildings and in city centres, and worked with a huge range of people in loads of countries.

His most recent book is Ghost Reader, commissioned by the Sheffield General Cemetery Trust. The book is for 9-12 year-olds and is illustrated by Ella de Souza. You can read more about it below. 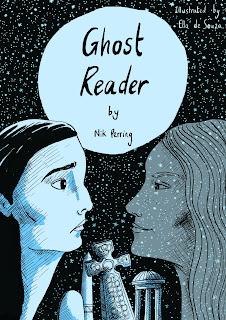 About Ghost Reader, by Nik Perring
The ghosts are forgetting who they are.
The Grey Girl needs help.

She’s come to Ayala to ask for it.

But how do you help a ghost? Especially one who doesn’t even know who she is …
Ayala is determined to find out in this exciting, sometimes creepy, and often tender adventure, starting in Sheffield’s General Cemetery and spanning eras and lives. There is help out there if you know where to look, from the living and the dead. The trick is finding out who’s telling the truth, and whose intentions might not be quite so honourable …
From Ghost Reader
‘You keep saying that you can’t remember things. How come you’re forgetting?’
Rosetta’s face became stern. ‘How would I know? Something strange has been happening. I wonder if the forgetting started when the visitors began arriving.’ She sighed. Pushed her hands to her cheeks. Shook her head. ‘Terribly sad. Those lost souls.’
‘Who?’ asked Ayala.
‘Newcomers to the cemetery, but not new to their second lives. For some reason, they started drifting in here, more faded than they ought to be. Some of them, you could barely see at all. All of them asking us questions that we cannot answer.’
‘What do they want to know?’
‘Who they are. Where they’re from.’
‘But why?’ asked Ayala.
A dog barked, and it was close.
Ayala froze. ‘Someone’s coming.’
Posted by Creative Writing at Leicester at 08:14