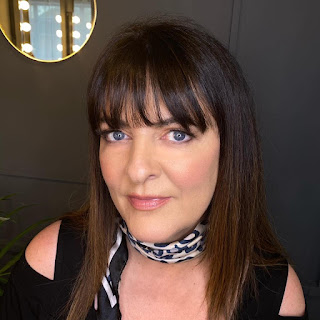 Kim Slater is the number one bestselling author of seventeen psychological crime thrillers. She has sold over two million copies of her books worldwide. She has also written four Carnegie-nominated Young Adult novels as Kim Slater for Macmillan Children’s Books. Kim has an MA in Creative Writing from Nottingham Trent University and lives with her husband in a small Nottinghamshire village. Her website is here. 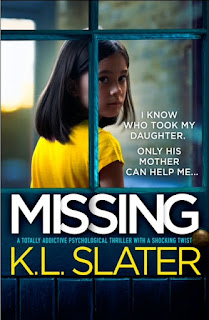 About Missing, by K. L. Slater

I've known him all my life. I know he has taken my daughter. His mother says she can help me. But she's the last person I can trust ...

Samuel lived next door when we were children. We were inseparable. But he didn’t like sharing me with my adored little brother. And one terrible night, he got rid of my brother forever …

Now, years later, he’s free. And my daughter is missing.

I turn on my baby girl’s unicorn nightlight and bury my face in her pillow, my heart breaking. I know Samuel has her – he blames me for ruining his life, and even after all this time, he still doesn’t like to share.

As darkness falls, there’s a knock at my door and I open it to see Samuel’s mother. She says she can help me.

I know I can’t trust her, but I don’t have a choice. With each step I take, my fear grows stronger. Can she help me find my daughter? Or does she know something about what really happened all those years ago? Something that could stop me from saving my baby girl …

The disused warehouse was massive, but Jimmy was trapped in a tiny room within it.

Earlier, he’d climbed in through a broken window and looked around. The old metal machinery was still intact. It ran in lines up and down the vast floorspace. Some had been broken into bits by vandals, others had metal pieces stripped from them, but all towered above him like dinosaur skeletons.

Jimmy had been in the place about ten minutes when he’d heard shuffling noises and a funny strangled noise like someone had coughed and tried to cover it up. He’d run further inside the wide-open space of the warehouse and seen a door standing open over on the far wall.

When he’d got closer, he’d spotted an old sign hanging lopsided on it. Jimmy was the best reader in his class, if you didn’t count the new boy. He’d held the sign straight so he could see it properly and pieced the sounds together. He’d said slowly to himself: ‘Re-frig-er-ation unit.’ Everyone knew it was dangerous to hide in a fridge in case the door shut by accident and you got trapped.

Jimmy had pushed the sign hard to watch it whizz round on itself and it had flown off, clattering to the concrete floor. He’d looked around in panic, watching and listening for movement but all was still. He’d stuck his head through the gap and squinted into the gloomy unit. There was no fridge in there.

The shuffling sound had seemed like it was getting closer. Jimmy had stepped inside the unit and waited for his eyes to adjust. There were no windows in here. The room was very dusty, bare shelves all around it and rusty metal hooks hanging from the ceiling. The door had been weirdly thick and heavy when Jimmy had pulled it to behind him, leaving just a tiny gap.

People at school said the warehouse was haunted by two burning women. Once a food manufacturing plant, lots of people had died here ten years ago when there was a fire and a big explosion. Nigel Burley in Year 6 had said he’d seen the two women in the Easter holidays last year. Everyone had sat quietly in a corner of the playground, listening as he’d told how they’d rushed past him screaming, their hair smoking, the flesh melting from their faces. Nigel had told them he’d thought they were real people until they both ran through a solid wall and disappeared, leaving nothing behind.

So Jimmy had held his breath when the shuffling sound had drawn closer and he’d bit his knuckles to stop himself crying out. If the burning women pulled open the door, he would put his head down like a Spanish bull and charge forward. Ghosts weren’t real, they were like fog. You could walk right through them.

He’d heard heavy breathing and then the door had begun to open. Jimmy had caught a scream in his throat and balled his fists ready to run. Then the door had been pushed hard from the outside, like someone had their shoulder against it. When it had closed with a clunk, the space was plunged into pitch black.

Posted by Creative Writing at Leicester at 02:23