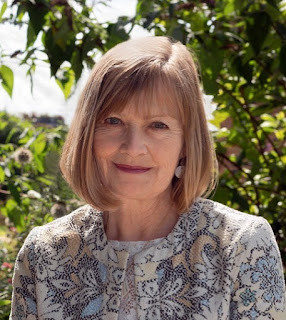 Maggie Brookes is an ex-journalist and BBC historical documentary producer turned novelist and poet. She relishes uncovering stories about the strength of women and the power of friendship and love in the most terrible of circumstances. Acts of Love and War, published in 2022, is a heartrending tale of love, courage and sacrifice, following three young British volunteers in the Spanish Civil War. The Prisoner's Wife – based on an extraordinary true story of WW2 – was published around the world in 2020. Maggie taught Creative Writing at Middlesex University for thirty years and has had six poetry collections published under the name Maggie Butt. Her website is here. She is on Twitter @maggie__brookes 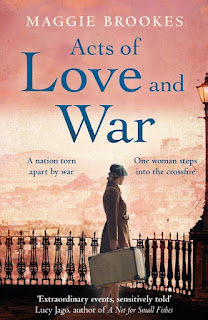 About Acts of Love and War, by Maggie Brookes

Maggie's second novel Acts of Love and War tells the story of Lucy who braves the horrors of the Spanish civil war to bring back two brothers - and ends up saving the lives of thousands of children. The two brothers are rivals for her affection and she loves them equally, or thinks she does.

Author Nikki Marmery calls the novel,  "A love story with a twist; a war story with a difference." It draws on the memoirs of extraordinary women who worked to deliver humanitarian aid to refugee children.

As the war intensifies, Lucy realises the challenge is not so much which brother she will end up with but whether any of them will survive.

You can see more about Acts of Love and War on the publisher's website here. Below, you can read an extract from the novel.

From Acts of Love and War

Lucy was sitting in her favourite place, halfway up the mahogany staircase, with a doll laid across her lap. From here she could see all the comings and goings of the house. She watched as her father opened the front door and light flooded into the panelled hall, fixing that morning in her memory forever, as if that was the day someone wound the clockwork and her life began.

Her father ushered Mrs Murray inside and took her to the drawing room. Behind her came two boys, silhouetted in the doorway against the bright day beyond: a bigger boy holding tight to the hand of his little brother. Jamie and Tom stood still for a moment, on the threshold of Lucy’s life, and then moved cautiously forward into the unknown hall. As they walked towards her their dark outlines blushed into colour and rounded into flesh.

Lucy thought one of them looked a little older than her and one a bit younger, perhaps seven and four. The bigger boy, Jamie, wore a school uniform with blazer, tie and short trousers. The small boy who gripped his hand was dressed in a sailor suit. As light fell on to their faces from the landing window behind her, Lucy saw Jamie’s lips were clenched hard between his teeth in the effort not to show his feelings, while Tom gazed all about in a mixture of fear and curiosity. They were as unalike as two brothers ever could be. Jamie had his mother’s blue eyes, sandy hair and freckled skin, while Tom’s eyes were brown as his hair; Jamie was skinny, as if he’d grown too fast, while Tom was square and solid; Jamie was pale as a china doll, whereas Tom was all aglow.

Lucy knew these were the boys who were coming to live in the little cottage next door. The boys with the dead father. She turned over the thought in her mind like a shiny new penny and imprinted on its reverse side she found the fact of her own dead mother.

She watched as the boys became accustomed to the relative darkness of the wide hallway and caught sight of her on the stairs above them. When their gaze met hers, something seemed to catch in her throat and an unfamiliar shiver ran through her. She set aside her doll and stood up.

Later they told her that rays of sun from the landing window illuminated the blonde curls which encircled her head. But all she would remember was the way they stopped and stared as though she was a vision, as though she could become the fixed point in the turmoil of their lives. As though she would save them.

Posted by Creative Writing at Leicester at 08:52