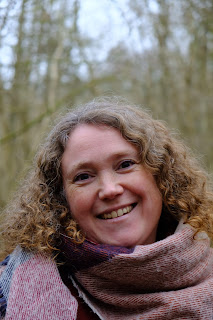 Joanna Ingham writes poetry and fiction. She grew up in Suffolk and has recently returned to live there after twenty years in London and Hertfordshire. Naming Bones, her debut pamphlet, was published by Ignition Press in 2019 and she won the Paper Swans Press Single Poem Competition in 2020. She has worked in community arts, facilitating Creative Writing workshops in a wide variety of settings. She lives with her husband and daughter. Her new pamphlet is Ovarium, from The Emma Press. 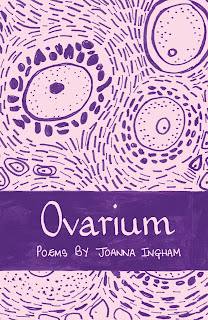 About Ovarium, by Joanna Ingham

Tender, loving and visceral, Ovarium is a pamphlet of poems about a giant ovarian cyst. The poet charts her journey with the cyst, from diagnosis to surgery to recovery, and explores the way illness can make our own bodies mysterious to us.

Ingham's poems are forensic as she looks at the disorientating and sometimes patriarchal language of anatomy and medicine. The collection shines a light on gynaecological illness and surgery, as the poet invites us to consider women's bodies as sites of illness, disgust and shame, as well as healing, endurance and strength.

You can read more about Ovarium on the publisher's website here. Below, you can read two poems from the pamphlet.

Cyst
I tried to think of you as fruit, growing
against the sun-warm wall of my gut.
Melon-headed, you nudged the leafy organs,
dug out a place for yourself in the plot.
I never guessed. I was only bloody earth
to you, a coldframe full of light.
You went on growing your juicy mucinous
segments, your membranes of pith,
imagining you were part of me,
that I would want you, pomegranate
arrogant. You grew where I should have
grown other things, gone to seed already.
When you were ripe the doctors cut you
from my branch, packed you whole in ice
so you wouldn’t bruise, searched
your maggoty core for rot. I wish
I’d seen you, weighed you in my hands,
breathed your fizzing orchard scent.

Two days after the blood test for CA125,
after passing the Macmillan stand by the automatic doors
with its rack of leaflets like ‘Preparing a child for loss,’
my terror solidifies into a half-imagined pain,
which I decide may very well be an emergency.
Because we don’t have a baby-sitter
I take a taxi by myself, wait for four and a half hours
on a plastic chair hoping that someone will tell me
they can take it out now, this thing I didn’t know I had,
with names like mass and growth and tumour.
I find I wish I had a dislocated shoulder instead,
like the green-faced boy, still in his football tabard,
or that I’d been in a fight like the girl from care,
or that I could sleep like the homeless man beside me,
his head on a black swollen bin bag.
When I’m finally taken to a booth, the nurse
presses two fingers into my belly, asks if I want
to feel it, explains that tumour doesn’t always mean
the worst. She diagnoses panic, tells me I’ll have to wait,
that I’m on the red-flagged pathway already.
At three a.m. I call a cab by the maternity block
and a man comes out and cries. I almost comfort him.
The pain is in my chest now, in my mind.
There is no subject it can go to that doesn’t hurt,
that doesn’t make me want to live.

CA125 is an indicator for ovarian cancer.

Posted by Creative Writing at Leicester at 09:08