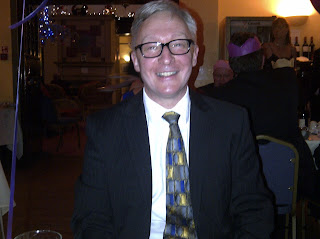 Gary Day is a retired English lecturer. His research mainly lay in three areas, the history of literary criticism, the workings of class in British literature and the persistence of sacrificial ritual in the development of drama. He had a column in the Times Higher for a number of years and has also edited two volumes on the history of British poetry as well as the three volume Wiley Encyclopaedia of British Literature 1660-1789. He teaches courses at the Rothsay Education Centre in Bedford and at the Settlement in Letchworth. He has been involved in amateur theatre for over thirty years and has poems published in Silver Apples and Beyond Words.

Below, you can read two poems by Gary.
Snapshot 1952

See them fly
To the church, to
The open-armed future,
She a spray of white,
He a flash of dark.
The days of their happiness
Pass in a shining house
With shadowy corners.
Love has many rooms
And sometimes
They are alone
In different ones.
After long years
You dream of her dress,
Floating in the wake
Of their togetherness.
The Art of Perspective
The apprentice yawns as he opens
The shutters to sunshine and birdsong.
He gazes at the purple of distant groves;
Then turns to face the clutter
Of tools, panels, brushes, shells
Frames and half-finished pictures.

This morning he has to grind pigments
For The Calling of the Apostles, the most arduous
Being the blue; pulverising the lapis,
Mixing the powder with beeswax and resin,
Kneading the sticky blob in bowls
Of water to deliver the ultramarine.

But today is special. After years
Of decorating parade shields, copying drawings,
Studying the human form, learning
About perspective and how to handle a brush
In his master’s style, he’s to paint
A section of background and a figure in the crowd.

This is where his future starts. The next step
Is a journeyman, then he must submit
His masterpiece. If it’s accepted,
He can open his own shop with his own garzoni.
But he mustn’t lose focus, he must stay
In the now, inducing the blue.

When, at last, he’s motioned to the canvas he’s startled
By the size of a kingfisher fired from a cloud, but says nothing.
His master speaks: ‘Modulate grey into blue here.
Match the angle of this mountain with that arm.
Fill this space on the right, next to the bearded man,
With a youth, black doublet, peplum.’

Centuries tick by.
The boy with the thumb in his belt
Turns as if someone’s called his name.
He marvels at the strange beings,
Giants, as in the age of Noah, who
Pass to and fro between worlds hung on walls.

Some are familiar; landscapes, still lives, the empty tomb.
Others astound him: An iron monster shuffling into its lair,
Its breath blurring the branchless trees; flowers on fire
In a vase; blue people dancing wildly in a ring;
Pink, sharp-edged creatures with triangle faces,
A ghost screaming.

Sometimes the giants peer into his little moment of time,
Baffled by the three Christs; two summoning the salt-tongued fishermen,
The third blessing them as apostles; they are puzzled, too, by how the prelates
Can be witnessing the birth of their own ministry; and they remark
On the distraction of the crowd, on the sail that looks like a solar panel,
And on how much they admire the blue.
Posted by Creative Writing at Leicester at 09:00