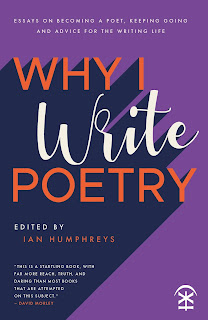 About Why I Write Poetry: Essays on Becoming a Poet, Keeping Going and Advice for the Writing Life, ed. Ian Humphreys

What motivates poets in the 21st century? How do they find their voice? What themes and subject matters inspire them? How do they cope with set-backs and deal with success? What keeps them writing? Why I Write Poetry, edited by Ian Humphreys, combines twenty-five lively and thought-provoking essays, along with individual writing prompts to help you create your own new poetry. 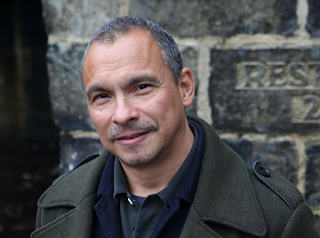 Ian Humphreys’s debut collection Zebra (Nine Arches Press, 2019) was nominated for the Portico Prize. He is the editor of Why I Write Poetry (Nine Arches Press, 2021) and the producer/ co-editor of a forthcoming anthology on Sylvia Plath (Nine Arches Press, 2022). His work has been highly commended in the Forward Prizes for Poetry and won first prize in the Hamish Canham Prize. A fellow of The Complete Works, Ian’s poems are showcased in Ten: Poets of the New Generation (Bloodaxe).

You can read more about Why I Write Poetry on the publisher's website here. Below, the editor Ian Humphreys shares an anecdote about an encounter and advice he received, and his own later instinct to "voice the unsayable."

From the Introduction to Why I Write Poetry

The late poet John Ash once pleaded with me not to take up poetry.

It was 1983. He had cornered me in the newly renovated kitchen of a house in Whalley Range. John rented the adjacent room. My friend Tarik rented a room on the second floor. Another friend Mark was pirouetting by the dishwasher when John stormed in to complain about the noise.

We had been giddily fixing 3am snacks while attempting an off-key rendition of ‘Love Pains’ by Yvonne Elliman, so it was a fair cop. John didn’t stay angry for long. He asked what I was studying, what my plans were, and seemed relieved to hear they did not involve poetry.

‘Good choice, very sensible. Whatever you do, please don’t become a poet! Stick to something where you can earn a bit of money.’ I remember laughing to myself. At that moment, I honestly could not think of anything I would enjoy less – an occupation that seemed duller – than writing poetry.

While researching this book, I discovered that around the time we met, John had written a short essay about his collection The Goodbyes (Carcanet, 1982). The piece was republished two decades later in Don’t Ask Me What I Mean: Poets in Their Own Words (Picador).

One part of the essay, in particular, caught my eye: ‘… many of the poems were written to the accompaniment of the kind of music you might hear at parties or in good nightclubs, that is to say, songs of August Darnell, Ashford and Simpson or the Chic Organisation, and on occasion the words of these songs have found their way into the poems.’

If only John had mentioned this during his pep talk. Perhaps I wouldn’t have waited thirty years before starting to write poetry myself. At school, we were taught the Romantics, nothing modern. After sitting my A-levels, I did not pick up a book of poems for two decades. I was unaware that contemporary poetry celebrated popular culture, that a ‘serious’ lyric poet could be inspired by August Darnell aka ‘Kid Creole’ of Kid Creole and the Coconuts.

John and I hardly spoke again. Once, over burning toast, he recommended Prince’s overlooked early albums. A year or so later, I heard he had moved to New York where he became associated with the New York School of poets.

Several poems in my debut collection Zebra (Nine Arches Press, 2019) explore my coming of age in 1980s Manchester. The gay club I had frequented the night John advised against poetry as a vocation is a touchstone in the book. I began to write about those early days on and around Canal Street, I think, to try and work out something about my formative years. For sure, there was joy, exhilaration and freedom. But there was also fear; a background dread that we accepted back then as part of life’s rhythm, as relentless as the four-on-the-floor beat of those Hi-NRG hits we lived for. It was fear of the unknown. Fear of illness. Fear of society’s disapproval which at any moment could mutate into danger.

Such contradictory emotions can be difficult to articulate, as slippery as a lager-soaked dancefloor. What I longed to communicate was feeling not fact, and this seemed best conveyed through the shimmering medium of poetry.

The need to voice the unsayable – reach for the ungraspable – is one of the main reasons I write poetry. It’s a motive I share with many of my peers. When I turned to social media to ask why poets do what they do, many replied with answers along the lines of:

Another response that came up, again and again, was compulsion:

I write poetry because I must.
It is a thing I do, like breathing.
I wrote poetry before I could write.
I can’t help myself.

Over one hundred poets responded, with variations on these two themes accounting for around ninety percent of all answers put forward. This posed a question: how could we prevent our contributors from writing multiple versions of the same essay?

The answer? Jane [Commane] and I identified what we most admired in the work of the selected poets. We then asked each of them to explore a theme reflecting this idiosyncratic quality as they riffed on their craft.

As you will discover, the tactic worked wonders. The resulting twenty-five essays are fascinating and varied. There’s little repetition, and thankfully even less navel-gazing.

Each piece is unique in its approach to the trials, tribulations and pleasures of writing poetry. The mix of styles is satisfyingly rich, from the informal to the academic, the lyric to the dreamlike. Together, the compositions stand as testament to the robust state of poetry in 21st century Britain.

Had I not started writing eight years ago, I would have missed out on so much, including the chance to curate and edit this book. As such, I am delighted I listened to instinct rather than advice, and eventually shimmied my way towards a calling, of sorts, in poetry.

Posted by Creative Writing at Leicester at 12:51