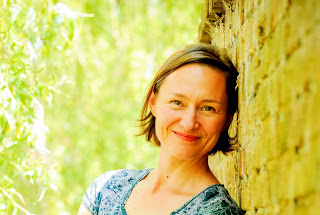 Alison Moore’s short stories have been published in various magazines, journals and anthologies, including Best British Short Stories and Best British Horror, and broadcast on BBC Radio. The title story of her first collection, 'The Pre-War House,' won the New Writer Novella Prize. Her debut novel, The Lighthouse, was shortlisted for the Man Booker Prize and the National Book Awards, winning the McKitterick Prize. She recently published her fifth novel, The Retreat, and a trilogy for children, beginning with Sunny and the Ghosts. Her website is here, and she's on Twitter @alimooreauthor 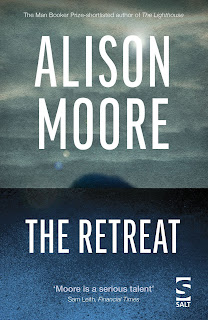 About The Retreat, by Alison Moore

Sandra Peters once dreamed of going to art college. Now in her forties, she is working as a receptionist but still harbours artistic ambitions. At a drop-in artists’ group, she sees an advert for a two-week artists’ retreat on Lieloh, a previously private island - home to a reclusive silent-film star - which has intrigued her since childhood. She signs up for the retreat, delighted by the idea of living ‘in Valerie Swanson’s house, among artists, in a little community. She imagines them supporting and inspiring one another.’ Sandra’s story develops alongside a second narrative focusing on a writer called Carol who’s been trying and failing to write a fantasy novel, and hopes to finally manage it secluded on an island.

Below, you can read a short extract from the novel.

Liel was an in-between place. Lying one hundred miles from the English coast, the island resembled Sandra’s known world but it had its own currency and its own system of car number plates; its post boxes were blue and its telephone boxes were yellow. It was not far from France but was not French. The island had its own distinctive language but Sandra had only heard English spoken there, though in a foreign accent. Some of the street signs and house names were in English and some were in French, or at least it looked like French. She did not, when she first holidayed there, know much French. At school, she learnt to say Je suis une fille unique, which sounded better than it was, and J’ai un cochon d’Inde, although she did not have one. Later still, she learnt phrases from a book: Good morning and Good afternoon, and I must go now and Go away! She could say A table for one please and I didn’t order this and Can I have a refund? She could say Can you help me? and I’m really sorry and I don’t understand. She imagined herself stranded with these phrases, hoping she would be all right.

Posted by Creative Writing at Leicester at 12:41