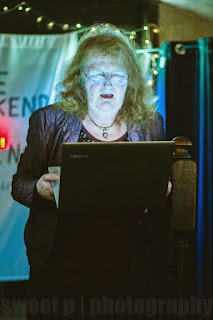 Sally Evans is from the North of England but has lived in Scotland for much of her life, where she edited Poetry Scotland for twenty years and hosted poetry gatherings in Callander, at the bookshop she runs with her husband. A well-known poet, she has been studying for a PhD at  Lancaster University where she set out to write a novel about poetry in Scotland and the North of England. The result is Wildgoose: A Tale of Two Poets, now published by Red Squirrel Press. 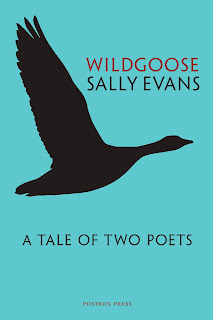 Wildgoose takes fictional poet cousins, Maeve Cartier and Eric Grysewood, and follows them through their careers in a novel of episodes in various parts of the North. The wild geese inspire Maeve with poetry and take us around the country and into the realm of imagination.

Real poets, especially those from the second half of the 20th century, interact with fictional poets in the story. Following the cousins to their destinies, the book comments on a poetry world that many readers will be familiar with. Amid changing social norms they work within the poetry community as they aim for publication and seek satisfaction in their lives. We see Eric succeeding relatively effortlessly while Maeve struggles with the notion of a young woman becoming a poet. We see Maeve composing her work, with some of her poetry in progress, and we follow Eric's responses to his cousin's life..

What happens to them makes an exciting read as Edinburgh, Newcastle, Grasmere, St Andrews and other locations give a background to the poets' lives and work. Basil Bunting, Hugh MacDiarmid, Norman Nicholson, and, more remotely, Wordsworth and Plath feature in the narrative, which includes a wealth of historical detail of the time.

From Wildgoose, by Sally Evans

Extract from Chapter 2: Maeve, 17, is eating with MacDiarmid and Bunting after a reading at Newcastle University Poetry Society:

The wine level went down in the carafes. More was supplied, along with dishes of vegetables. Maeve drank her wine very slowly. Basil was discussing a place called Briggflatts. ‘I took Sima there. She’s used to the northern wilds.’

‘Tom Pickard told me to go there,’ said the host, ‘but I still haven’t been.’

She’d heard Eric mention Tom Pickard. It all seemed so cliquey. She should earn her meal by contributing talk, but it wasn’t easy. She didn’t want to say anything stupid. The poets could be her grandfathers by age. The scholar, though younger, looked as if he was married. Unfussed, sensibly-dressed, he kept a benign eye on her, as he had first done when Eric abandoned her. Licking her ice-cream spoon, she caught a quick, scary glance from MacDiarmid as he finished his cheese.

She suddenly saw she might have been invited for decoration, for the flirt value. This shocked her so deeply that she launched into conversation.

‘I write poetry too!’

MacDiarmid’s face broke into a grin. ‘What did you think of my poems, then?’

‘What language are they in?’

She knew she shouldn’t have said that, but the poet had irritated her.

She felt a frisson from the others.

‘I write in Scots!’ His face became animated, under his extraordinary hair that shot up from his forehead for all of three inches then fell away backwards in a tangle. He was still speaking English. He was in England after all.

She turned her attention to the less intimidating Basil.

‘Seriously, I write poems. I have a long way to go but – you have to start…’

‘Quite right, my lovely,’ said Basil.

‘Have you copies of poems you have written?’ Basil leaned closer to her. ‘You are right to note that it is northern poetry. We speak for our people, on their behalf. I believe you when you say poems excite you. Where are your poems?’

Maeve paused. This sounded like luck, but was it? She had no poems on her person. She didn’t have big pockets in her clothes like the men. 'My poems are in the room where I’m staying tonight. I must go home. I’m beyond tired.'

Chris was contemplating his whisky glass and had lapsed into silence.

Posted by Creative Writing at Leicester at 10:34