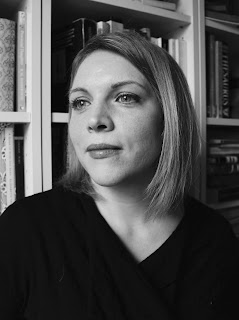 Naomi Krüger is a writer and academic based in Lancashire. Her short fiction has been commissioned by Lancaster Litfest, commended in Aesthetica and published in various literary journals. Her debut novel May was published in 2018 by Seren. It was highly commended in the Yeovil Prize, longlisted in the Not the Booker Prize and described by Wales Art Review as ‘a rewarding read: an ambitious novel that speaks to our times.’ Naomi has an MA and PhD from Lancaster University and lectures in Literature and Creative Writing at the University of Central Lancashire. Her website is here. You can read a review of May on Everybody's Reviewing here. 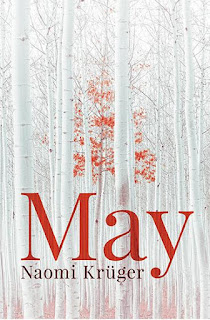 The door to the past has been locked to May but fragments of memories still remain: a boy running on the green, his fiery hair, a letter without a stamp, a secret she promised not to tell. She can’t piece together the past or even make sense of the present, but she revisits what she knows again and again. The boy, the letter, the secret. She can’t grasp what they mean, but maybe the people she’s loved and lost can uncover the mystery of the red-headed boy and his connection to May.

Like memories, the book moves through the decades, weaving together the lives of May’s family and Afsana, the woman who cares for her at the nursing home. Their recollections are linked by feelings of doubt, remorse and a sense that they are mourning the paths their lives could have taken. Aftershocks from the past reverberate in the present.

You can read an excerpt from Afsana’s perspective below.

The newsreader is wearing too much make up. It makes her look old. Her hair is as stiff as a helmet. She re-caps the main stories. I’ll feel bad later. I’ll have to make it up to him. I’ll tell him I know I’m selfish. I’ll tell him I’m trying to change. Push the bowl away and think about May. I can’t help it. The images come whether I want them to or not, driving out the pictures of water rushing through shop doorways and people – ordinary people – climbing onto the roofs to get away. Her obsession with the boy starting again. Getting worse because of my stupidity. The enchanted boy. The boy who runs into the trees. He came to the back door once, she said, with nothing on. Not a stitch. And there was frost on the ground. His little toes must have been turning to ice. He was jumping up and down on the spot. Wouldn’t even stay still long enough for them to wrap him in a blanket.

But there’s nothing at all about him in her memory book. No photos, no records. Only a daughter and never any siblings of her own. Then again, if Dadi ever ended up in a place like that I might not be in her memory book either. It would be easier that way. Better not to exist than to be such a disappointment.

The sound of Ewan moving around next door. I tiptoe to the bookcase and crouch down to look in the bottom shelf. The Concise Oxford Dictionary. Baba had one too, a different edition and not so concise. He kept it high in his office so we had to ask him to get it down when we needed it for homework. I pray the word is spelt how it sounds. Gill mentioned it so casually, as though it was a normal part of conversation. There’s new research, she said, that suggests that sometimes the best way to keep them happy is just to play along. The pages are thin like scripture. The words so tiny they move and blend. I run my finger down the list and find it between confab and confect. Confabulate. Con. Fab. U. Late. Imaginary experiences as compensation for memory loss. Maybe Ewan’s right. I’m just wasting my time on things that don’t matter. The boy’s not coming. It’s all fantasy. Most likely he never existed at all.

Posted by Creative Writing at Leicester at 03:52