Jonathan Coe, "Mr Wilder and Me" 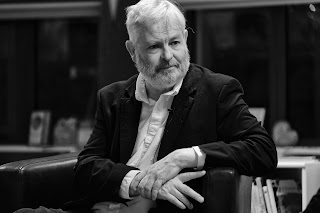 Jonathan Coe, photograph by Josefina Melo
Jonathan Coe was born in Lickey, a semi-rural suburb of Birmingham, in 1961. He attended King Edward’s School, Birmingham, Trinity College, Cambridge and Warwick University where he wrote a thesis on intrusive narration in Henry Fielding’s Tom Jones. His first novel The Accidental Woman was published in 1987 and he is now the author of thirteen novels, including What a Carve Up! (1994), The House of Sleep (1997), The Rotters’ Club (2001), The Terrible Privacy of Maxwell Sim (2010), Number 11 (2015) and Middle England (2018). In addition he has published a fable for children, The Broken Mirror, and a biography of the experimental novelist BS Johnson, Like A Fiery Elephant. He is also an amateur musician whose album Unnecessary Music can be heard on bandcamp.com. On twitter his handle is @jonathancoe. Below, he talks about his new novel, Mr Wilder and Me, and you can read an extract from it. 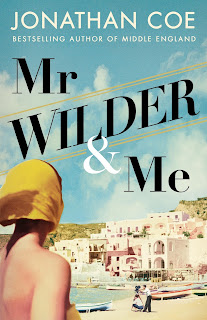 About Mr Wilder and Me
I discovered Billy Wilder’s films in the late 1970s, when I was a teenager. But the first film of his that I saw (on television) was not one of his acknowledged masterpieces – such as Double Indemnity, Sunset Boulevard or Some Like It Hot – but The Private Life of Sherlock Holmes, his reimagining of the great detective’s personal life, which had been a commercial and critical flop.
I’ve written elsewhere about how my love for this film developed into a full-blown obsession. And of course it led me to watch all of Wilder’s other films, and to find out as much as I could about his life: his formative years in Vienna and Berlin, his flight from Nazi Germany in 1933, his transition from Hollywood screenwriter to Hollywood director. I became fascinated, in particular, by his meticulous, craftsmanlike approach to screenwriting, the formal solidity of his plots, the elegance of his narrative structures. Before the age of video recorders, I recorded his films off the television onto audio cassette and listened to them in bed at night, absorbing the rhythms of his dialogue. His influence on my development as a writer was much greater than that of any novelist.
So I have always wanted to write a book about Billy Wilder. But there are already several good biographies. And besides, while writing Like a Fiery Elephant, my biography of BS Johnson, the thought had stolen over me, more than once, that it might have been a better idea to write a novel about him instead. I might have got closer to him that way; perhaps even written something more truthful. And so I finally arrived at the idea that my book about Wilder should be a work of fiction, albeit based on real events.
The real event I chose to focus on was the making of Fedora, Wilder’s penultimate film – one of his most rarely-viewed, and one of his most puzzling. I knew that it had not been an altogether happy experience, either for Wilder himself or for his co-writer IAL Diamond (who is also an important figure in my book). So because I didn’t want this to be a bitter novel, a story of failure and disappointment, I decided to narrate it through the eyes of a completely invented character – a young Greek woman called Calista, who is taken on as an interpreter during Fedora’s location shoot, and who is full of optimism and starry-eyed wonder at being admitted into the world of Hollywood filmmaking.
I wanted to write a novel about the nature of creativity, and how it changes as you grow older. About the relationship between America and Europe. About the love between two professional colleagues (Wilder and Diamond) who in many ways are closer to each other than they are to their wives. About the most intense forms of personal grief, how you deal with them and how they find their way into your art. Above all, I hope it will be a novel that will make its readers want to watch Billy Wilder films again.
From Mr Wilder and Me
‘You don’t know the story of Nijinsky?’ he said. ‘He was a great dancer, but he went nuts. He ended up in a mental asylum suffering from terrible delusions. There’s a funny story about that, as well.’
This seemed unlikely, but Mr Diamond was determined to tell it anyway.
‘Billy was in a meeting once, with a producer. And he was telling him that he wanted to make a film about Nijinsky. So he told the producer the whole story of Nijinsky’s life, and this guy was looking at him in horror, and saying, “Are you serious? You want to make a movie about a Ukrainian ballet dancer who ends up going crazy and spending thirty years in a mental hospital, thinking that he’s a horse?” And Billy says, “Ah, but in our version of the story, we give it a happy ending. He ends up winning the Kentucky Derby.”’
And this time I did laugh, partly because I thought the story was funny, and partly because I liked the way Mr Diamond told it, the way his eyes shone as he reached the punchline, the way that for him, briefly, the telling of this joke brought an instant of strange joy and clarity to the world. And I realised that for a man like him, a man who was essentially melancholy, a man for whom the ways of the world could only ever be a source of regret and disappointment, humour was not just a beautiful thing but a necessary thing, that the telling of a good joke could bring a moment, transient but lovely, when life made a rare kind of sense, and would no longer seem random and chaotic and unknowable. It made me glad to think that in the midst of the world’s many intractabilities he still had this one source of consolation.
Posted by Creative Writing at Leicester at 12:36