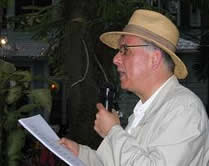 Michael W. Thomas is the author of eight poetry collections, two short fiction collections and two novels. His latest poetry collection is Under Smoky Light (Offa's Press, 2020); his latest fiction collection is Sing Ho! Stout Cortez: Novellas and Stories (Black Pear Press, 2021). His work has appeared in The Antigonish Review (Canada), The Antioch Review (US), Critical Survey, Crossroads (Poland), Etchings (Australia), Irish Studies Review, Irish University Review, Magazine Six (US), the TLS and Under the Radar, among others. For many years he was poet-in-residence at the Robert Frost Festival, Key West, Florida. He has just completed a new novel, Nowherian, the memoir of a Grenadian exile's time in England. 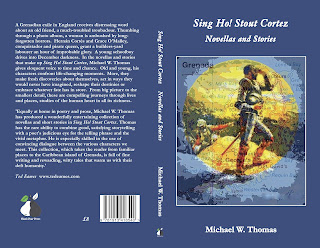 A Grenadian exile in England receives distressing word about an old friend, a much-troubled troubadour. Thumbing through a photo album, a woman is ambushed by long-forgotten horrors. Hernán Cortés and Grace O’Malley, conquistador and pirate queen, grant a builders-yard labourer an hour of improbable glory. A young schoolboy, victim of incipient abuse, steals the family car and drives into December darkness. In the novellas and stories that make up Sing Ho! Stout Cortez, Michael W. Thomas gives eloquent voice to time and chance. Old and young, his characters confront life-changing moments. More, they make fresh discoveries about themselves, act in ways they would never have imagined, reshape their destinies or embrace whatever fate has in store. From big picture to the smallest detail, these are compelling journeys through lives and places, studies of the human heart in all its richness.

Speaking of the collection, Michael says: "All of these pieces were written within the last four years, aside from Esp, which was shortlisted for the UK Novella Award, 2015, and which enlarges on the experiences of Henderson Bray, first encountered in 'Misshapes from Cadbury’s' in my story collection, The Portswick Imp. An early working title for the present collection was Timely Voices. What seemed to unite the pieces here was the sense that, in each, the narrator or main character works towards (or stumbles upon) a crucial time in their life: a time to discover, confront, act or somehow honour a long-standing rendezvous with something—a feeling, a nugget of knowledge—whose importance can no longer be dodged.  I think that such a theme still holds good. Reading through the pieces again, however, I’m also struck by another one: escape from current circumstance. In some pieces, characters literally do just that (all hail to the car and the open road). Of course, once a story ends, it’s lights out and curtain. But it’s been observed that every exit becomes an entrance elsewhere. So I can only hope that, however these characters act, whatever prompts their changes or departures, they will find what they’re looking for (or something as near as makes, in the end, no difference)."

You can see more details about Sing Ho! Stout Cortez on the publisher's website here. Below, you can read a sample from the book.

Extract from Esp: The Voice of Grenada: A Novella

Henderson Bray, a Grenadian working for a year at a care centre in the English Midlands, receives a letter about an old school-friend, Esp, a wayward troubadour and troubled soul.  The letter transports Henderson back to his early years: particularly, to Esp’s rise as self-styled Voice of Grenada ...

When he wasn’t enraging Restless Headey, our unspeakable English teacher, Esp was into the guitar. He got pretty good, too. His favourite players came from all over. But there was no face among them from any Caribbean island, no Dwight Pinkney, no Fitzroy Coleman or Flores Chaviano. His heroes came from lands where, we thought, folk had permanent colds or got moved on by the cops for looking like that instead of this; then, too, they were coeval with our older brothers, our youngest dads, which made them even mistier.  Eric Clapton and Jimi Hendrix tussled for Esp’s golden crown, though they got shunted off at times in favour of, say, Pete Townshend’s windmill arm or the precise snap of Mark Knopfler. And he went yet further, in time and oddity. My Uncle Padmore, a limited but flamboyant picker himself, got wind of Esp’s doings and dug out a cassette of Les Paul and Mary Ford whose quality spoke of a mike prodded against a mono-speaker:

He was right.  Their take on the song enraptured Esp—the whole swamp-toned album did.  He saw a giddying challenge in Les Paul’s multi-track wizardry.  Clapton and the rest were great, no doubt of it, but they played one guitar. There were times when they defied it, outraged it, melted it, but it was still just a single thing in their hands. This Les Paul, said Esp ... and his wonderment would stream out in a long whistle. He became the pioneer’s gospeller.

The business of reproducing what Les Paul had wrought with miles of tape—who knows, even cried over, while Mary supplied beer and handkerchiefs—didn’t faze Esp in the least. At an audition for a school show, he constructed a singular hommage to ‘How High The Moon,’ playing a tape he’d recorded of the chord progression and then—with art and elegance, the rest of us thought—playing the same progression live but with a sweetly-timed delay to catch something of the original’s fat echoes. Now and then he threw in mouth-guitar, a line of juvva-da-juv juvs which jostled sparkily with the live chords ...

Posted by Creative Writing at Leicester at 08:53