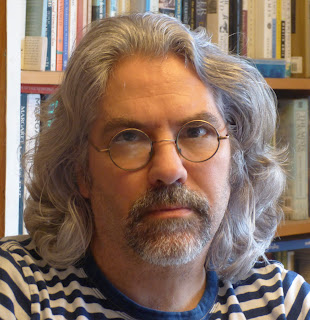 Charles G Lauder Jr was born in San Antonio, Texas, lived for a few years each on America’s East and West Coasts, and moved to south Leicestershire, UK, in 2000. His poems have been published widely in print and online, and in his two pamphlets Bleeds (Crystal Clear Creators, 2012) and Camouflaged Beasts (BLER, 2017). From 2014 to 2018, he was the Assistant Editor for The Interpreter’s House, and for over twenty-five years he has copy-edited academic books on literature, history, medicine, and science. His debut poetry collection is The Aesthetics of Breath (V. Press, 2019). He is on Twitter @cglauder 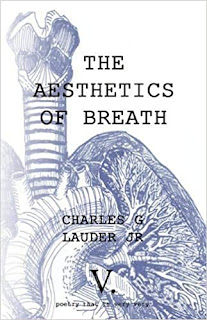 About The Aesthetics of Breath, by Charles G Lauder Jr

The Aesthetics of Breath, my debut poetry collection and most recent book, focuses on history, both public and personal. Some of the poems are about well-known historical figures like Einstein and Napoleon, as well as America's past, whereas others are about my Texas childhood. Quite a few explore masculinity and my relationship with my father, and what it means to live as an ex-pat for the past two decades. The book ends with a sequence of a dozen poems about family relationships and home.

From The Aesthetics of Breath

There’s a doppelganger in my house,
taller, slimmer, mistaken for me
over the phone. He cries like I do

but that serrated tongue can cut
those closest to him, hissing out
when he’s cornered and angry.

He brings up Star Wars and Doctor Who,
he knows I like to talk about them,
as if he’s learning, but avoids girls and sex.

He won’t swear, prefers the sweetness
of sugar and fudge; at fourteen,
I was dared and haven’t stopped since.

I protest I am more than number tricks,
facts and figures about space and light,
or what Tudors ate for dinner. Maybe

he is more than I ever could be.
Friends say he’s a time traveller,
that he’s really me from the past,

but surely I would remember this.
Is he proof of a parallel universe
bleeding into ours? I know what’s next:

rebellion into booze, weed, and speed,
though he can’t stand the taste of beer.
He’ll discover his father’s feet,

gravity-tacky, are made of clay,
have never left earth. There will
be time and distance between them.
Sir Walter Raleigh of Bexar County, Texas
Returned from England I bestow this gift of grandchildren
like valuable treasure laid at your feet   you the king and queen
and I magus explorer buccaneer spy
blown in from the cold of the New World
after seven eight years
with natives half-naked half-crazed.
Their DNA is a cypher spelling out rough and tumble gorse
hawthorn and bramble shredding the balls of thumbs
ancient ponds where witches floated and innocent drowned
great warriors asleep underground await to be woken
steed-shaped headlands stampede into the sea
seawater spewing from black nostrils.
The dead   revered in song and story around the fire of a once
magnificent empire trading in flesh opium and tea
lost generations buried in mud   burned by mustard
dance as shadows on these chalky faces wild as dandelion and nettle
she on all fours roars and hisses      scratches at the air
he poised and on guard   finger pointed and cocked.
***
On the journey here through Detroit to Oklahoma
then a two-storey train down into Texas
they marveled at how high we were   mountains of snow
replaced by a sun so hot it burned their ears as we landed.
Wires crisscross overhead like a cage   snakes hide at their feet
at the museum they circle round mammoth and saber-tooth
hunched down and looking for the moment
to spring   then pose beside their fresh kills.
Your feast of grilled cheese sandwiches tastes of rubber
pickles too bitter   bacon thin and greasy   their first doughnut
takes them two days to finish before they finally give up
and chase each other for miles.
Night is as bright as day   lit up door to door with Christmas lights
front-lawn inflatable Santas snowmen and kings   they clap
and shout    try to catch fake snow on their tongue
but turn down your offer of church.
***
You notice a change of accent when I translate
that I’ve lost my bearings   how to find the corner store
my old school   where old girlfriends lived.
America has grown small in my absence
a fear and hysteria grips the kidneys
so hard no one can piss
without a loaded pistol in hand.
You think he’s gone over   painted his skin
bowed down to trees and standing stones
tossed coins and armour into the river
to appease angry gods    and take me to the preacher
who tells me there is no saviour but Jesus.
What should I confess? That I stood naked in a circle
about the fire handfasted to a daughter of Mercia
calling forth spirits of the forest
to fill my limbs while I fill her
with my seed and the air
with mud-moon howls,
yielding this ragwort   this cornflower   their fevered heads
buzz with my memories of glass and steel cities   fibre-optic
highways    of drive-thrus   drive-ins    gated driveways
of starting over   the pelts from their backs
traded for new clothes   new name   new face.
Posted by Creative Writing at Leicester at 04:32