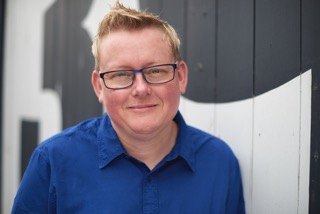 Sarah Barnsley grew up in the Midlands where her dad was a firefighter. A winner in the Poetry Society Members’ Poems Competition (2021, 2018), her work has appeared widely in magazines including Poetry Wales, The Rialto and The White Review. Other publications include a pamphlet, The Fire Station (Telltale Press, 2015), co-editorship of Truths: A Telltale Press Anthology (2018), and literary criticism. Sarah is Senior Lecturer in English and American Literature at Goldsmiths, University of London, Contributing Editor to The Understory Conversation and lives in Hove. Her website is here. 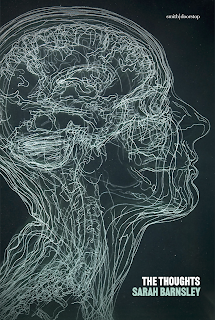 An assured and inventive debut, The Thoughts explores different manifestations of intrusive thoughts as part of obsessive-compulsive disorder (OCD) before navigating through the twists and turns of recovery and love. These poems inhabit therapists’ treatment rooms, waiting rooms, and everyday documents, appearing in such varied forms as emails, research proposals and kids’ puzzles. Compassionate and at times painfully humorous, The Thoughts is an act of advocacy, giving voice to critically underrepresented experiences of illness through poems that are as peculiar and creative as they are arresting.

From The Thoughts, by Sarah Barnsley

There’s this horse
that can’t eat apples.
It’s not that the horse
doesn’t like apples
or that its castle of teeth
can’t crush them
or that its leather-satchel tongue
can’t collect the bits
or that its upturned welly of a throat
can’t tramp down the chunks –
it’s that one day,
as it drew up an apple
of no distinction,
the horse had a thought:
What if I choke on this?
And the more the horse tried
to swat the thought away,
the more the apple grew,
and the more the thought grew

until the horse felt it had Jupiter
and all its moons in its mouth
and it couldn’t breathe
and it was gagging
and its owner tried to reason with it,
but the horse wouldn’t be told
and over the course of a year
the horse visited the vet
every Wednesday at 12
and the vet advised the horse
to try an exercise where the horse
had to choose a small globe
from a bagged assortment
and hold each one in its mouth
in a series of graded steps:
a robin’s egg for one minute,
a beetroot for two,
a cannonball for three;

and the horse had to
commit to the process
and tolerate the discomfort
and by all means note down
its thoughts and feelings
but not respond to them
and none of this worked
and the only thing for the horse
to do was to eat oats and practise
radical acceptance
of apples as something eaten
by other horses
in another place and time
as if all the apples in the world
were locked behind
glass cabinets
in a museum
with all the other things
the horse’s thoughts had
forced it to give up:
cool pools,
hugs of mud,
low-hedged fields.

Posted by Creative Writing at Leicester at 02:16