In this article, author and journalist Ruth Hunt talks about her novel The Single Feather, and the experiences behind it. You can also read an excerpt from the novel. 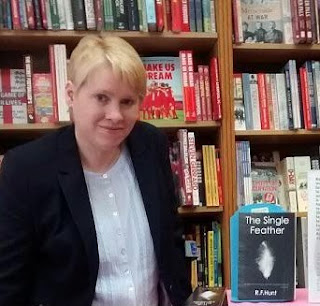 About The Single Feather, by Ruth Hunt

The idea of The Single Feather came to me as drastic benefit cuts for the sick and disabled working-age adults were announced, not only threatening the lives of those with disabilities but also causing a potential conflict between the younger disabled and the elderly.

I wanted a disabled lead character (Rachel) who was just as complicated as any of the other characters. My hope was as readers progressed through the novel they would see Rachel as a character, not a disabled character.

Rachel had just escaped from a traumatic experience. She was dropped into a community with people much older than her. This was just at the point when the ‘scroungers’ debate was going on. In the case of The Single Feather this ‘community’ was an art group. I chose art due to the ability for it to be transformative, especially when there has been trauma..

Of special interest was how the characters' (in some cases, secretive) pasts have shaped their futures, directing who they’ve become as people and how they interact with others. This was why I chose a quote from Chris Rock as my epigraph: 'When you meet somebody for the first time, you’re not meeting them, you’re meeting their representative' (Bigger and Blacker Tour 1999).

The title comes from Rumi:

With friends you grow wings
Alone
You are a single feather in disgrace
With them you master the wind
But alone
You’re blown in all directions.

For years, friends on social media only met my ‘representative,’ the real Ruth unsure of just how people would take it if I revealed the nature of my ‘accident.’ Eventually I took a deep breath …

Problems emerged in the first year of my A-Levels when I had my first period of mania. Not that long afterwards I fell into a deep depression and had to be admitted to a psychiatric hospital.

By the time I was discharged I had only just emerged from the near-catatonic state I had been in, and my parents were concerned it was too soon. They were reassured by the psychiatrist who told them there would be community follow-up from a CPN.

I started to get my energy back, but my mood was still low. One day I climbed up onto a window ledge, my body dropping between 35 to 40 feet and landing on the backs of my heels. The shock went straight up my back, breaking L1, L2 that were ‘burst,’ causing extensive damage including spinal cord damage.

Emergency surgery left me as an ‘incomplete’ paraplegic with some sensation on the front of my legs, but apart from that a lack of mobility and sensation below my waist – which also meant my bladder and bowel no longer worked.

The move into journalism (2015 onwards)

I have since been diagnosed with kyphosis, and spinal cord-related osteoporosis. When I was in my thirties my right leg had to be amputated due to a neuropathic sore on my heel that had led to an infection in the bone.

Due to my disabilities deteriorating at a frightening speed in the period between The Single Feather being finished and the press attention, I knew it would be very difficult to write another novel. But being interviewed gave me the idea of moving into journalism.

I completed an Arts-based degree with The Open University, before studying for my journalism qualifications, finishing with a Postgraduate Diploma in Journalism. Throughout, I have been writing features with a focus on social justice such as physical disability, mental illness, and social care. Some of my work can be found here.

Life is still a struggle. I have about three hours a day when I am not affected by pain and the side-effects of heavy-duty medication, so must cram any writing work into that slot. When I look back to the few years before and since 2015, it seems unfathomable how I ever managed to write a novel and pass these qualifications.

Below, you can read an excerpt from The Single Feather. You can also see a review of the novel on Everybody's Reviewing here. 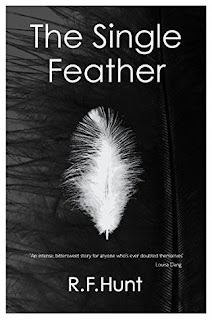 From The Single Feather

(In this excerpt, the two main characters Rachel and Anne are meeting for the first time so that Rachel can show her the paintings and ask whether she can join the art group) ...

I was taken aback to see a tall lady, in her late fifties, I guessed, wearing a duffle coat, with a royal blue woolly hat and matching gloves.

‘Oh, I’m sorry I didn’t realise. Are you Rachel?’ She looked crestfallen.

An awkward moment followed, as she didn’t give me time to move away from the door. Due to the stair lift and my wheelchair, space was limited in my hall, which meant she had to squeeze through the gap. It didn’t help she was plump, I followed her into the living room where I could see her bend over the coffee table and look at my painting.

‘Do you like it?’ I tried to moisten my lips with my tongue.

‘Who lives with you?’

Anne sat down on the edge of the blue chair and took off her woolly hat to reveal light brown and greying hair, cut into a helmet style that framed her face. Her features were etched with wrinkles and looked as if they’d been barbecued in the sun.

‘Nobody.’ I nodded towards the coffee table. ‘That one took me a month to complete.’

‘A month? I can sometimes spend months and months on just one paining, it’s marvellous that with everything you can still paint, and nobody looks after you, not even your parents?’

Posted by Creative Writing at Leicester at 03:02