Paul McVeigh (ed.), "The 32: An Anthology of Irish Working-Class Voices" 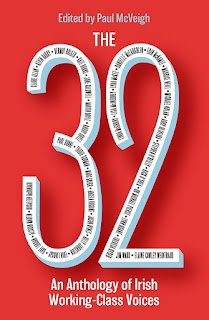 The Observer recently described Kit de Waal’s My Name Is Leon and Paul McVeigh’s The Good Son as the 'exceptional working-class novels from the last few years' so it seems apt that Kit passed the baton from her bestselling Common People anthology to Paul McVeigh to edit The 32: An Anthology of Irish Working Class Writers.

Like Common People, The 32 is a collection of essays and memoir, bringing together sixteen well-known writers from working-class backgrounds with an equal number of new and emerging writers from all over the island of Ireland. There are contributions from Kevin Barry, Roddy Doyle, Lisa McInerney, Danielle McLaughlin and Eoin McNamee to name a few. 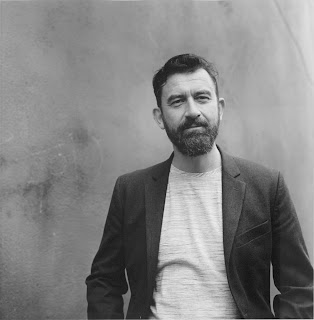 Paul's debut novel, The Good Son, won The Polari First Novel Prize and The McCrea Literary Award, and was shortlisted for many others including The Prix du Roman Cezam.

Paul began his writing career as a playwright and comedy writer. His short stories have been in numerous anthologies, journals and newspapers, as well as on BBC Radio 3,4 & 5, and Sky Arts. He co-founded the London Short Story Festival and is associate director of Word Factory, London, ‘the UK's national organisation for excellence in the short story’ (The Guardian). He co-edited the anthology Belfast Stories, and edited Queer Love & The 32: An Anthology of Irish Working Class Voices. He has judged numerous literary prizes, including The Edge Hill Short Story Prize, The Dylan Thomas Prize and, currently The V. S. Pritchett Short Story Prize for the Royal Society of Literature. His writing has been translated into seven languages. His website is here.

Below, you can read an excerpt from Paul's Introduction to The 32, which introduces this brilliant collection of personal essays and memoir.

From the Introduction to The 32, by Paul McVeigh

If one of the defining characteristics of the wealthier members of our society is the desire to pass on their riches and privileges to their progeny to maintain the status quo, I find that for the working class who’ve achieved success in the arts, many become passionate, if not warrior-like, about passing on their wealth in precious knowledge to those of their feather who are following behind, to bring about change; the cartography for navigating the obstacles on the way to joining them. I’ve also described it as ‘leaving a trail of breadcrumbs’ and Kerry Hudson recently in the Guardian as ‘send[ing] the elevator down.’ As a working-class artist, it can often feel that on your journey you watch others flying past because they have a car while you are on foot, watch others waved through at gatekeepers’ check points while you are stopped and found to be carrying the wrong papers. Successful working-class artists often travel between worlds and are likely to pull over and offer you a lift.

Kit de Waal is a prime example. Having gotten a substantial three-book deal on the back of her debut, My Name is Leon, Kit de Waal used some of the money to set up an annual scholarship at a London University for a student from a marginalized background. She also came up with the idea, and raised the funding for, Common People: An Anthology of Working-Class Writers. The book contained thirty-two pieces of memoir about working-class life, sixteen established and sixteen new writers, including an essay by Dave O’Brien on the impact that class background has on your chances of breaking into the publishing industry as a whole. The statistics are shocking in the UK and you can check out that essay, or, online, find numerous surveys conducted by a number of organisations, such as the Society of Authors, some including data on Northern Ireland. Though some research has been done in Ireland recently, the statistics are largely unknown but you can read an essay which raises the subject at the end of this book from Dr Michael Pierse.

How did The 32 come about? The short version is, Common People was a huge success and while touring festivals in Ireland with the book, Kit de Waal was asked on many occasions ‘will there be an Irish version?’ and voilà! It was by no means a simple transplanting, however. Some questions I’ve been asked might be best answered here, briefly. The name change. The phrase ‘common people’ didn’t have the same connotations in Ireland as it did across the water, so we needed a new title. As there were thirty-two contributors and the book would be all-island, I thought The 32 would work and changed ‘writers’ to ‘voices’ as there were a couple of contributions that wouldn’t be from writers.

Those commissioned were chosen due to a number of factors. Most, I, or in some cases Kit, had worked with in the past, we knew their background and interests, and that they could be persuaded to come on board to lend their talent and literary weight to the topic and the project. I tried to find a spread around the island and a variety of forms and genres. The expression ‘you have to see it to be it’ was on my mind. As a working-class boy from Belfast, I never thought I could be a writer. This may sound strange to some, but if I’d known a working-class boy from the north became the Books Editor of The Irish Times, I think it would have impacted what I thought might be open to me ...

Posted by Creative Writing at Leicester at 02:34