Stephen Johnson, "The Eighth: Mahler and the World in 1910" 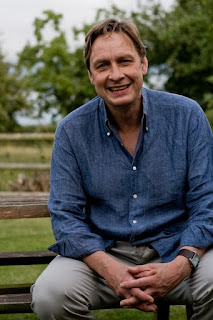 Stephen Johnson studied at the Northern School of Music, Manchester, and composition under Alexander Goehr at Leeds University, then at Manchester University. Since then he has written regularly for The Independent and The Guardian, and was Chief Music Critic of The Scotsman (1998-9). He is the author of Bruckner Remembered (Faber 1998), and studies of Mahler and Wagner (Naxos 2006, 2007). As a BBC broadcaster he presented Radio 3’s Discovering Music for fourteen years, as well as a series of fourteen programmes about the symphonies of Bruckner. He is also a regular contributor to the BBC Music Magazine.

Stephen's radio documentary, Shostakovich: Journey into Light, was nominated for a Sony Award in 2007. And in 2009 his radio documentary, Vaughan Williams: Valiant for Truth, won a Sony Gold Award. His book about music and mental health, How Shostakovich Changed My Mind (based on the Shostakovich documentary) was published in Spring 2018, followed in 2020 by a book about Mahler’s Eighth Symphony, The Eighth: Mahler and the World in 1910 (Faber). In 1997, Stephen began composing again. His orchestral work Behemoth Dances had its premiere in Moscow in April 2016, followed by its UK premiere in London in May. In January-February 2019 his Clarinet Quintet Angel’s Arc was performed by Emma Johnson and the Carducci Quartet. The premiere of his String Quartet, to be performed by the Brodsky Quartet, is planned for November of this year.

Stephen's website is here. You can read more about his book How Shostakovich Changed My Mind on Creative Writing at Leicester here. 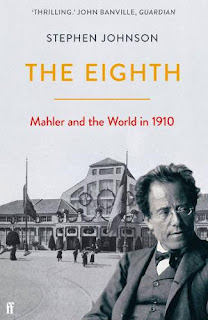 About The Eighth: Mahler and the World in 1910, by Stephen Johnson

As the title suggests, this book attempts to shed light on Mahler’s epochal achievement in composing and staging the premiere of the Eighth Symphony by putting it in as broad a cultural and political context as possible. It is therefore also a book about the extraordinary period of Mahler’s lifetime in which adopted home city Vienna became a kind of modern Athens: a fiery crucible in which so many ideas that inform the modern world had their first, dazzling flowering. Not just in music, but also in literature, the visual arts, and in the revolutionary new discipline of psychoanalysis, the energy created when freshly emancipated Jewry met and embraced the greater German artistic and intellectual traditions had far-reaching consequences. At the same time there were ominous political undercurrents, soon to lead to far darker consequences. The book attempts to show how Mahler’s Eighth Symphony reflects and engages with all of these, and goes on to examine the work he began in 1910 and very nearly finished, the Tenth Symphony, concluding that understanding of Mahler is incomplete if its message is ignored.

Below, you can read an extract from the book.

From The Eighth: Mahler and the World in 1910

A Gift to the Nation

One comment Mahler made about his Eighth Symphony has baffled several of his commentators: he refers to it as his "gift to the entire nation" (Geschenk der ganzen Nation). Mahler goes on to call it "a great joy-bringer," thereby aligning the work directly with Beethoven's Ninth Symphony, and particularly with its concluding Ode an die Freude, "Ode to Joy." But where the Schiller text set by Beethoven offers its "kiss to the whole world" (Diesen Kuß der ganzen Welt!), Mahler offers his to "the entire nation" (der ganzen Nation), by which, it seems clear enough, he specifically means the German nation. Mahler a German nationalist? It seems unlikely, and yet it is possible to argue that there were aspects of the Eighth Symphony that Mahler considered specifically German. For a start, there is the setting, in the symphony's significantly larger second part, of the final section of the iconic text by the iconic German writer and thinker. We have already seen how closely Mahler identified with Goethe, to the extent of knowing passages from Faust Part II by heart. As Mahler would have been well aware, he wouldn't have been alone in this, at least not amongst educated German-speakers in the first decade of the twentieth century. For many in the larger German world, and particularly in the recently unified German lands, Goethe was the proudest of all the young nation's cultural exhibits. The breadth of Goethe's achievement was awe-inspiring in itself: poetry, novels, dramas, literary and aesthetic criticism, research into botany, theory of colour and, from the age of thirty-three, a career as a highly active and influential statesman at the Ducal Court of Weimar - it must have seemed that there was nothing Goethe couldn't do. He was the type of the Universalische Mensch, the "universal man" - or rather, since the word Mensch is supposed to be non-gender specific, "universal human being." (Mensch remains, however, a masculine noun). Though Goethe had been dead for nearly eight decades in 1910, his stature and his contemporary "presentness" was as high and as relevant as ever. For some, Goethe was more a prophet than an artist: hadn't he predicted in Faust Part II, with almost forensic precision, the way human society would develop after the Industrial Revolution - an epochal event, it was now argued, with far more important long-term consequences than the French Revolution? (Downplaying French attitudes and innovations had become fashionable in Germany since the newborn country's emphatic victory in the Franco-Prussian War of 1870-1).

By 1910 Goethe had become a figure of almost religious significance. To take just one example, as Mahler was preparing for the premiere of his Faust-centred Eighth Symphony, Rudolf Steiner, the philosopher, mystic and founder of the science (or pseudo-science, if you prefer) of Anthroposophy was making the first designs for his fifteen-hundred seater Goetheanum - a cathedral-like synthesis of artistic design and sensory effects consecrated, naturally, to the Universalische Mensch. At one point in 1910, Stefan Zweig was rendered "dizzy" by meeting the daughter of Goethe's physician, Dr Vogel. Zweig later developed quite a flair for meeting people who offered a touch of physical contact with "the heights of the heroic and Olympian world ... But nothing stirred me so much as the face of that old lady, the last among the living to have met the eye of Goethe himself. And perhaps I, in my turn, am the last who can say today: 'I knew someone whose head was touched tenderly by Goethe's hand for a moment.'" Nor was this kind of reverence exclusive to the intellectual elite. I remember, on one of my earliest trips to Germany, meeting an old man who delivered, after several beers, an unexpectedly hilarious account of his modestly middle-class family hymning Bismarck to the theme of the final of Beethoven's Eroica Symphony, while the bust of Goethe beamed approvingly from his place of honour on top of the family piano, just as he did in countless other German households ...

Posted by Creative Writing at Leicester at 08:19